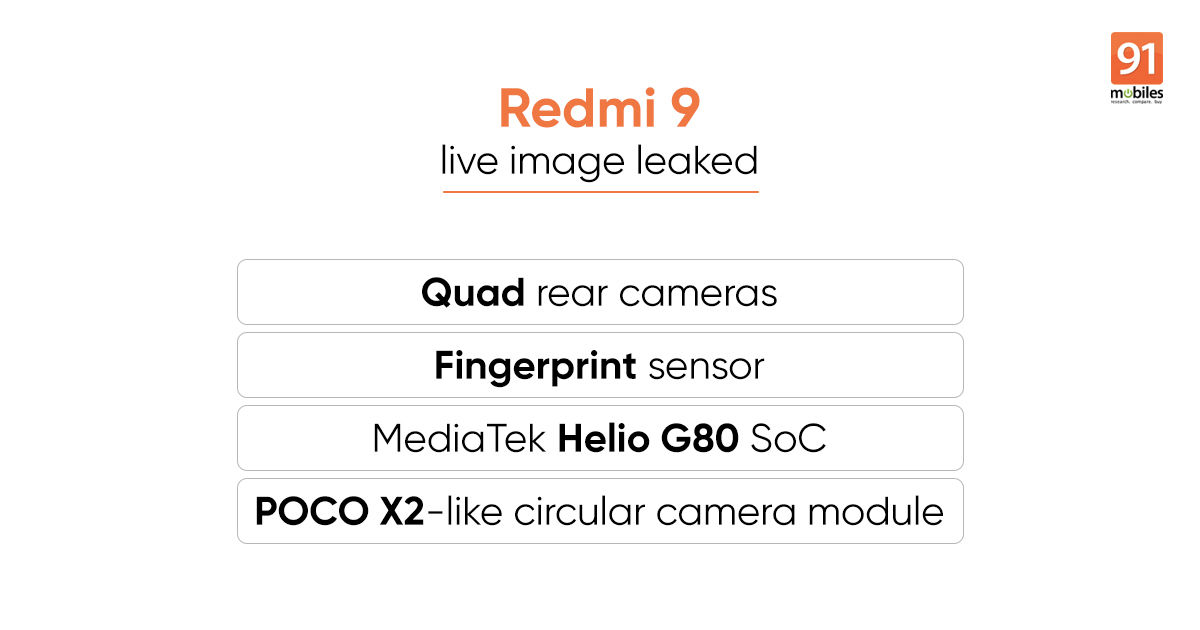 “Redmi 9 is expected to come with Helio G80 SoC, Android 10 OS, and a circular camera module similar to the POCO X2”

Redmi 9 is expected to launch this year as a budget smartphone in the series. Xiaomi has already launched the Redmi Note 9 Pro and Redmi Note 9 Pro Max smartphones earlier this month, so it is possible that the Redmi 9 launch may happen soon enough. The successor to the Redmi 8 has been rumoured about a few times earlier this year, with 91mobiles reporting that it might launch in March with a Helio G70 SoC. Now, an alleged Redmi 9 live image has surfaced on Twitter, which shows off its rear design and key specifications. It seems the phone will tout a quad camera setup on the back, which would be an upgrade over the 12MP dual camera setup over the Redmi 8. Moreover, the tipster claims the phone will be powered by the Helio G80 SoC instead of the G70 chipset.

Redmi 9 can be seen sporting quad cameras at the back along with an LED flash and traditional fingerprint sensor for security. The camera module is surrounded by a circular ring, similar to the Redmi K30/POCO X2. Unfortunately, the image doesn’t reveal the front-design of the phone but it could have a punch-hole or waterdrop notch to accommodate the selfie camera and sizeable across all corners. We also see that the phone will come in a gradient blue colour option.

As for the specifications, the Redmi 9 is said to feature a 13MP primary camera, an 8MP ultra-wide camera, a 5MP macro lens and a 2MP depth sensor. The handset is tipped to be powered by the MediaTek Helio G80 SoC, a chipset found on the Reame 6i as well. The RAM and storage options. The Redmi 9 is likely to run Android 10 OS with MIUI 11 custom skin on top. While not much else is known about the phone, the display could bear an HD+ resolution, a single front camera and a beefy battery with fast-charging support. Given the legitimacy of the leak can’t be confirmed at the moment, we suggest you take the Redmi 9 live image with a pinch of salt and wait for an official announcement from Xiaomi.