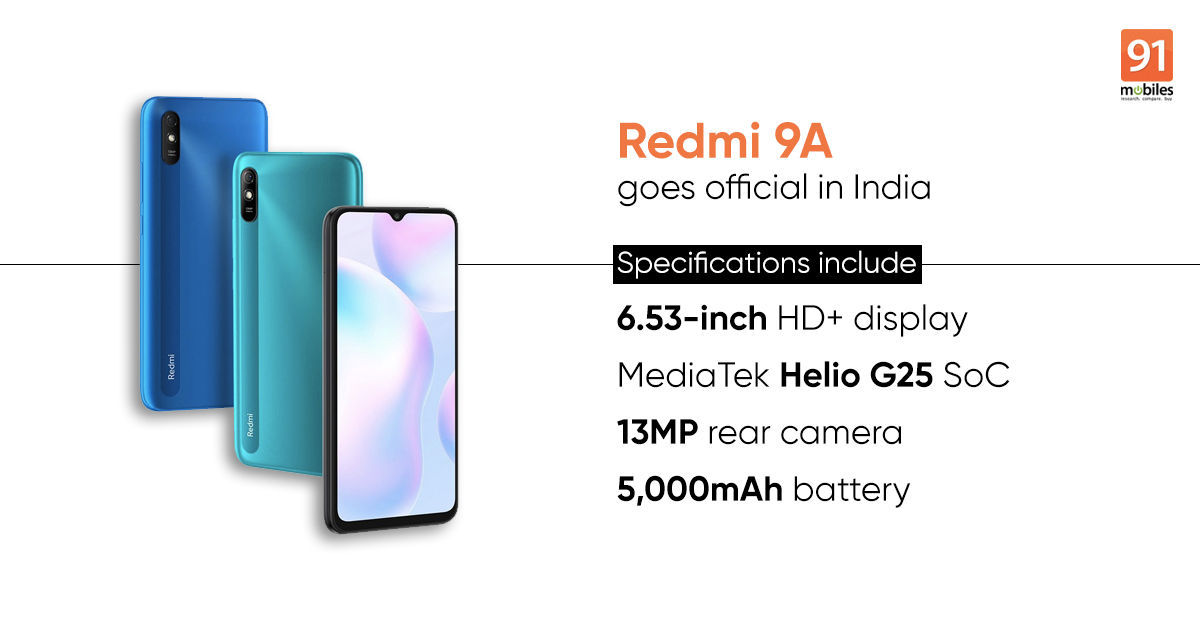 Redmi 9A has been officially launched in India as an entry-level smartphone, a few months after making its debut in Malaysia. The Redmi 9A succeeds the Redmi 8A and is positioned below the Redmi 9, which was announced in the country just a few days ago. The form factor of the new phone is similar to the Redmi 9 but the specifications are toned down. The handset touts an HD+ display with a waterdrop notch and a single rear camera. The Redmi 9A price in India falls under Rs 8,000, so it takes on the likes of Realme C11 and Nokia C3 2020.

The Redmi 9A price in India is Rs 6,799 for the base model with 2GB RAM and 32GB storage and Rs 7,499 for the 3GB + 32GB variant. The first sale of the Redmi 9A is on September 4th at 12 PM on Mi.com, Amazon, and Mi Home stores. The phone will be available in Midnight Black, Sea Blue and Nature Green colour options.

Redmi 9A runs Android 10-based MIUI 12 out of the box and supports dual SIM cards as well as a dedicated slot for microSD card. The phone comes with a unibody design and gets a P2i coating for splash resistance. The handset sports a 6.53-inch HD+ (1600×720) LCD display and is powered by the 2GHz MediaTek Helio G25 chipset, which is equipped with the HyperEngine technology and IMG PowerVR GE8320 GPU. This is paired with up to 3GB RAM and 32GB onboard storage.

In the camera department, the Redmi 9A sports a vertical module at the back that houses a single 13MP AI camera and an LED flash. At the front, the phone features a 5MP snapper for selfies and video calling. The entire setup is driven by a 5,000mAh battery. In terms of connectivity, the phone features 4G LTE, Wi-Fi, Bluetooth, 3.5mm headphone jack, and micro USB port for charging. The phone does not come with a fingerprint sensor.