Xiaomi recently spun off its Redmi series of smartphones as a standalone brand and its debut launch came in the form of the Redmi Note 7. Going forward, the new brand seems to be going big o all front including the entry-level segment. According to the recent reports, the company is working on an Android Go smartphone called Redmi Go. The  smartphone has previously been certified by the US Federal Communications Commission (FCC) and the Eurasian Economic Commission (EEC) previously. It has now been spotted on the NBTC Certification website in Thailand. 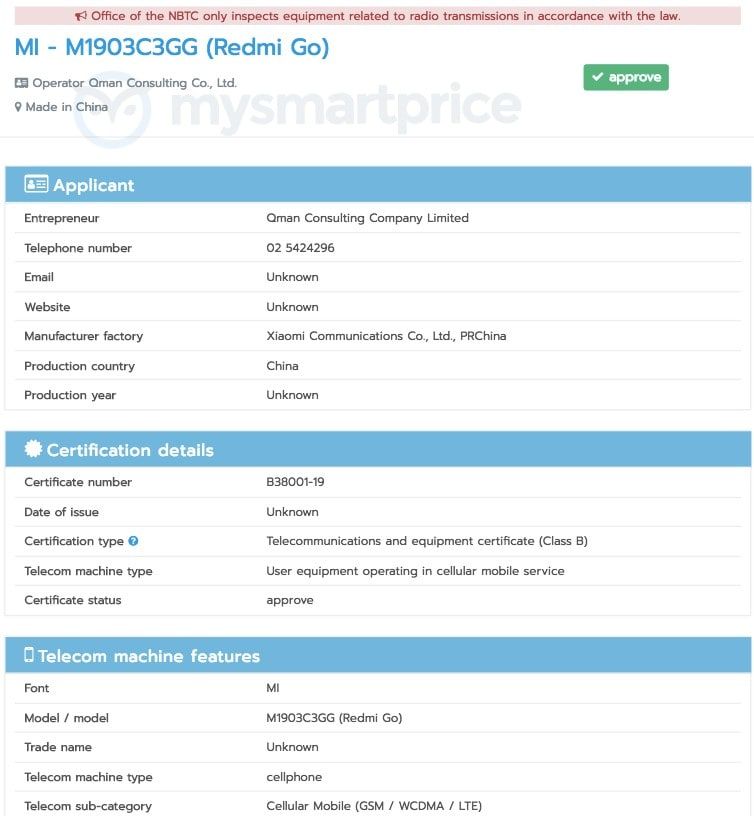 The Redmi Go smartphone has been spotted with the model number M1903C3GG, which is the same as the leaks spotted in the past. The NBTC listing has also mentioned the Redmi Go, thus confirming the moniker for the upcoming smartphone. Apart from the nomenclature, Thailand listing doesn’t reveal any relevant information regarding the upcoming smartphone. However, we do have some insight into the spec sheet of the phone, thanks to the past certification leaks.

Past leaks have revealed that the Redmi Go is expected to come with a 5.9-inch display with HD+ resolution and an 18:9 aspect ratio. If the aspect ratio is of any hint, we might not see any display notch on the upcoming smartphone (not that anyone was expecting it). The smartphone is being speculated to feature 1GB of RAM and 16GB of internal storage. There is no word as of now on the processor or other details of the phone. As for the software, the Redmi Go is likely to boo the Android 9 Pie Go Edition out of the box.

Coming to the pricing, it’s being speculated that the smartphone will be priced below the current entry-level smartphone, Redmi 6A that retails for Rs 5,999 for the base variant. Going by that logic, we can expect the Redmi Go to be price below Rs 5,000. As of now, there is no word on the launch date.