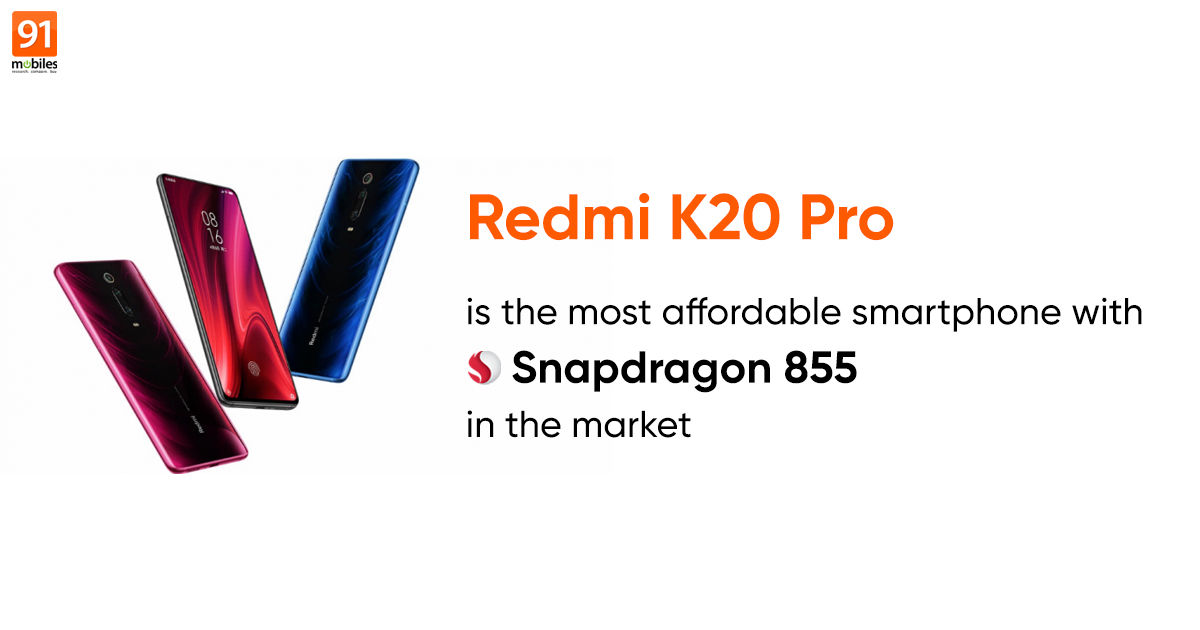 Redmi K20 Pro affordable flagship smartphone has been launched in India, alongside its relatively cheaper sibling. Both the Redmi K20 series smartphones were originally announced in China in May as the brand’s first handsets to sport pop-up selfie cameras. The Redmi K20 is a mid-range offering with a Qualcomm Snapdragon 730 processor, while the Pro variant is a flagship handset with the Snapdragon 855 chipset. Apart from the chipsets, both the smartphones offer the similar specifications under the hood; this is also the first time the brand is offering an AMOLED panel and in-display fingerprint sensor on a Redmi phone.

The Redmi K20 Pro prices in India are Rs 27,999 and Rs 30,999 for the 6GB + 128GB and 8GB + 256GB variants. As for the Redmi K20, price in India starts at Rs 21,999 for the 6GB + 64GB for the base variant. its 6GB + 128GB variant costs Rs 23,999. Xiaomi says 70,000 people participated in the first alpha sale for the Redmi K20 series. These customers can go on Flipkart and Mi.com tonight at 8pm and purchase the handset; they can redeem their Rs 855 coupon and get a Rs 2,000 cashback on making the transaction via ICICI Bank credit cards. The company will be conducting a second alpha sale for the Redmi K20 series on July 18th — customers need to go to a Mi Home store to book a unit by paying Rs 855.  Those who want to avoid the rush of a flash sale can wait for the first sale instead, which will be held at 12pm on July 22nd via Mi.com, Mi Home stores, and Flipkart. Buyers will get Rs 1,000 off on ICICI credit card transactions in the flash sale. Other launch offers include double data on the Rs 249 and Rs 299 prepaid Airtel recharge.

Lastly, the limited Redmi K20 Pro Signature Edition made of gold and encrusted with diamonds has been revealed. The company says only 20 units of this limited edition device will be available for purchase. However, the price and release plans have not been decided yet; the making charges for the device are Rs 4.8 lakh, and that the company sell the device for Rs 4.8 lakh itself, forgoing the cost of the hardware itself.

Apart from the handsets, the company also unveiled the 27W SonicCharge adaptor, compatible with the Redmi K20 Pro; this adaptor has been priced at Rs 999. While two new smartphones come with a hard case in the box, Xiaomi is also selling anti-slip silicon cases priced at Rs 499. Mi Neckband Bluetooth earphones with Bluetooth 5.0, 8-hour battery life, and Siri and Google Assistant compatibility were also launched at the event, priced at Rs 1,599; these will go on sale on July 23rd. Lastly, the Mi Rechargeable LED lamp was unveiled for crowdfunding at the event, priced at Rs 1,299.

Talking about the Redmi K20 Pro first, the phone sports a 7th-gen in-display fingerprint sensor and a layer of Corning’s Gorilla Glass 6 at both the front and back. The handset is equipped with a 6.39-inch AMOLED screen with 1,080 x 2,340 pixels and a 19.5:9 aspect ratio. The Snapdragon 855 processor on board is based on 7nm fabrication process and offers a clock speed of up to 2.84GHz. The graphics processor onboard is the Adreno 640.

In the imaging department, the Redmi K20 Pro has three cameras at the back including a 48MP f/1.7 main sensor, a 13MP f/2.4 secondary snapper, and an 8MP telephoto f/2.4 shooter. There’s also support for PDAF, 2x optical zoom, HDR, and 4K video recording support at 60fps. For selfies and video calling, you get a 20MP f/2.0 motorised pop-up snapper. The company says the pop-up module can rise in less than a second and is tested 300,000 times to ensure durability; this means the pop-up module will work without a hitch for 8 years if you take 100 selfies a day. For protection, the module features sapphire glass on top and can retract automatically when the gyroscope detects it has been dropped.