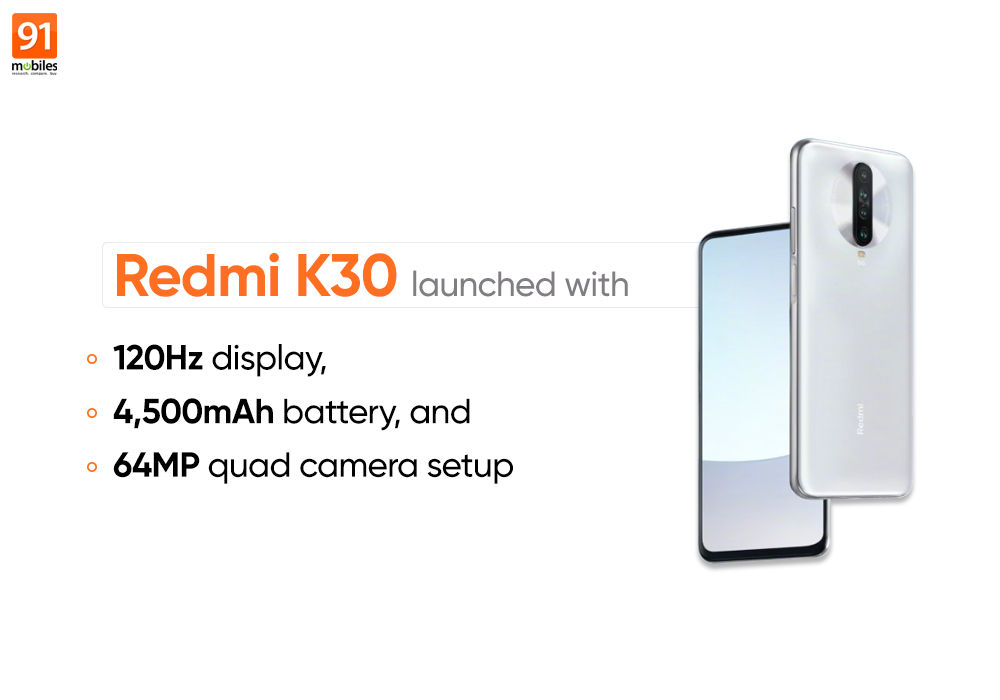 Xiaomi Redmi K30 5G smartphone has launched in China. The handset, which takes on the Realme X2 in the country, is officially the first smartphone to launch with Qualcomm’s latest mid-range Snapdragon 765 SoC with 5G connectivity ticking at its core. Redmi K30 5G is also the world’s first smartphone to rock Sony’s 64-megapixel IMX686 sensor as its main camera. Other highlights of the phone include a punch-hole display with 120Hz refresh rate, dual selfie camera, and 30W fast charging. Xiaomi has also announced a Redmi K30 4G variant that rocks a Snapdragon 730G SoC.

The Redmi K30 India availability has not been confirmed yet, but the handset has been certified by Indian certification agency BIS which could mean that it’s heading to the country soon.

Coming to the Redmi K30 5G specifications, the smartphone packs a 6.67-inch LCD display, which is slightly bigger than its predecessor Redmi K20. The screen has curved edges, an astounding 120Hz refresh rate, Full-HD+ resolution, and a pill-shaped punch-hole at the top right corner that houses dual selfie cameras, just like the Samsung Galaxy S10 Plus. The phone sports a frosted AG glass back, which looks similar to the OnePlus 7T, and a 12-antenna design.

Redmi K30 5G is powered by the new Snapdragon 765G SoC with an integrated 5G modem. The Redmi K30 4G mode, however, comes with a Snapdragon 730G SoC. Both the Redmi K30 5G and 4G models come in four RAM and storage variants. The handset ships with MIUI 11 atop Android 10 and houses a beefy 4,500mAh battery with 30W fast charging support that will juice up the device in 66 minutes. The phone has a side-mounted fingerprint scanner for security. The Redmi K30 4G version features 27W fast charging support.