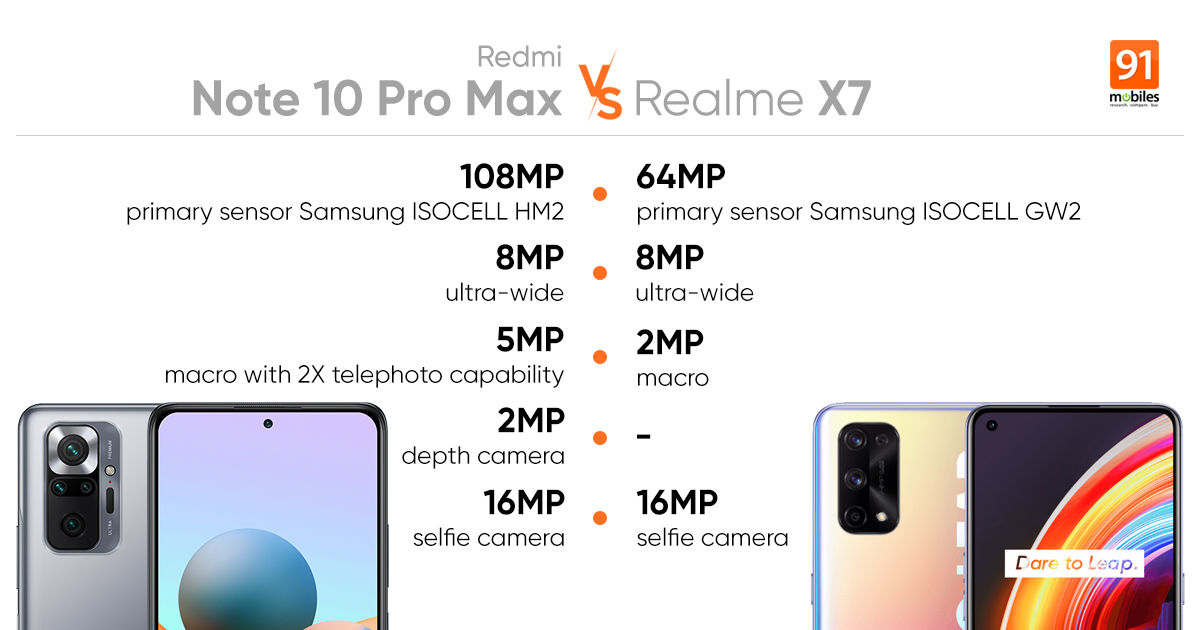 Xiaomi announced an update to its most popular smartphone lineup in India last week, that comes in the form of the Redmi Note 10 series. Apart from adding several features and upping the specs, Xiaomi has focused a lot on the camera performance of its devices. The top-end model in the range, the Redmi Note 10 Pro Max, actually features a 108MP camera, making it the first phone in the segment to offer such a high-resolution sensor. 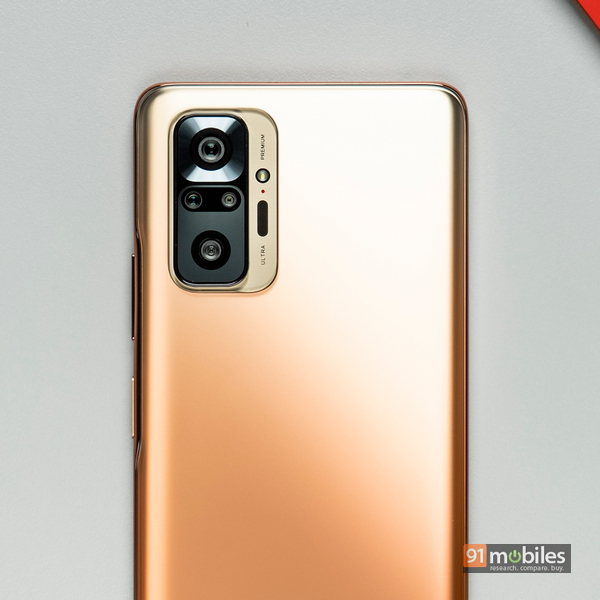 At a starting price of Rs 18,999, the Note 10 Pro Max (pictured above) is placed squarely against the Realme X7 (review) which has a 64MP primary sensor. Both devices feature multiple sensors in their respective camera arrays, with the Note 10 Pro Max offering four, while the Realme X7 has to contend with a triple-camera setup. Let’s see in this comparison how the two phones fare against each other in the camera department, and how well they tackle different lighting conditions. 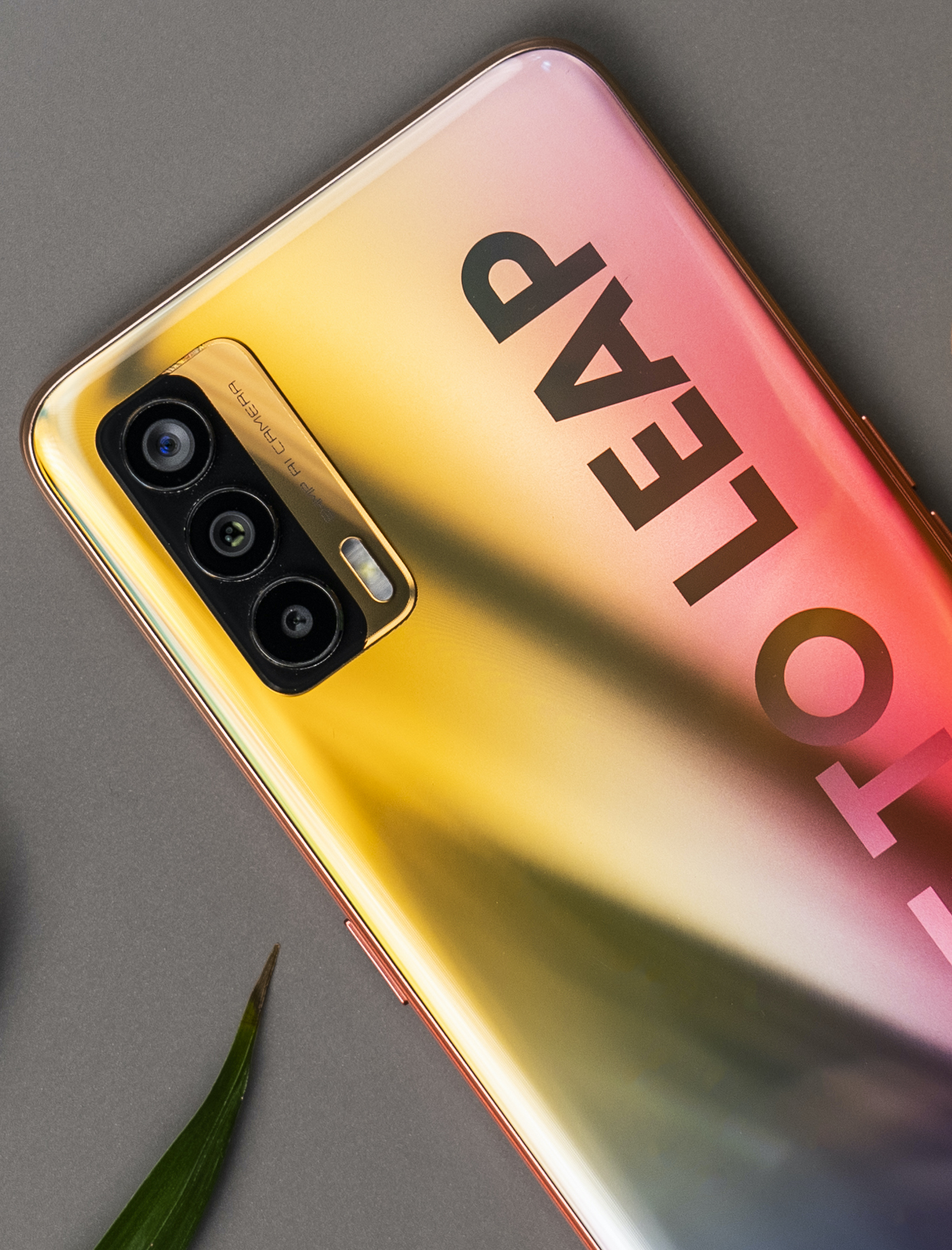 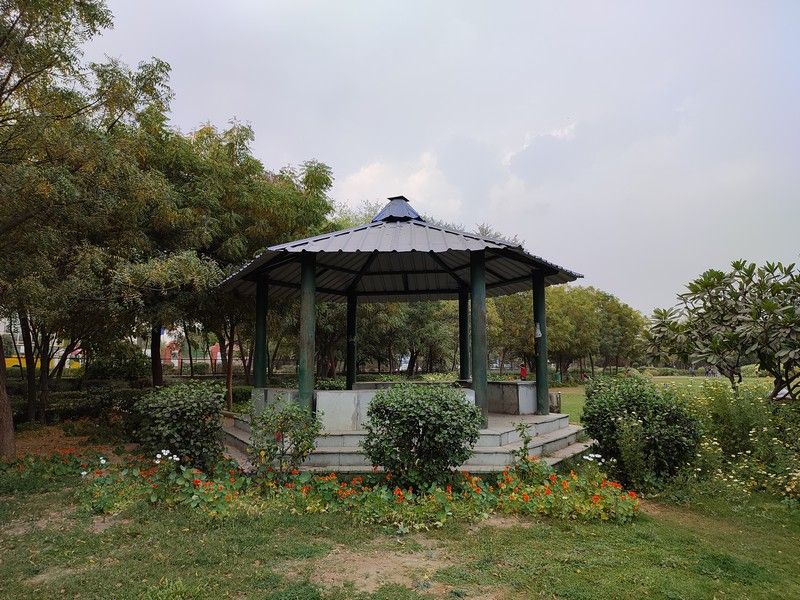 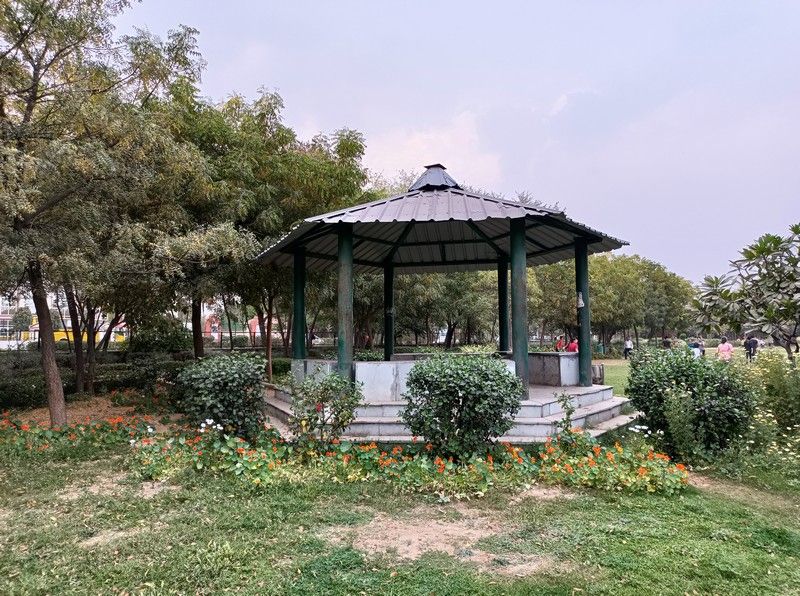 The Redmi Note 10 Pro Max packs in the new 108MP Samsung ISOCELL HM2 sensor, which uses nine-in-one pixel binning to combine 0.7μm pixels into one large 2.1μm pixel. The Realme X7 on the other hand, has the popular Samsung ISOCELL GW2 sensor that uses quad-pixel binning and has a smaller 1.4μm sensor size. The results above indicate that in normal mode, the Redmi Note 10 Pro Max brings in more detail while keeping the colours much more natural as compared to the slightly contrasty look on the Realme X7. Dynamic range is constant throughout both shots although the conditions were not very bright enough to bring out the sky’s colour. 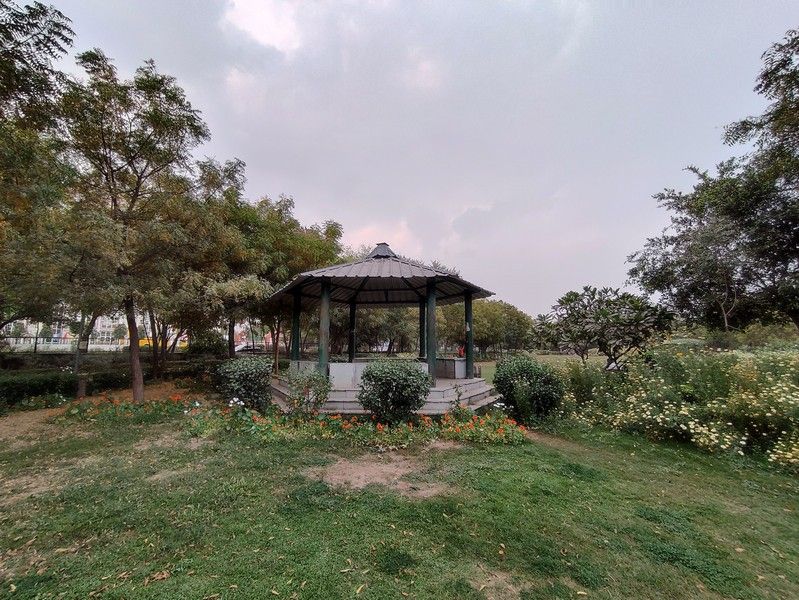 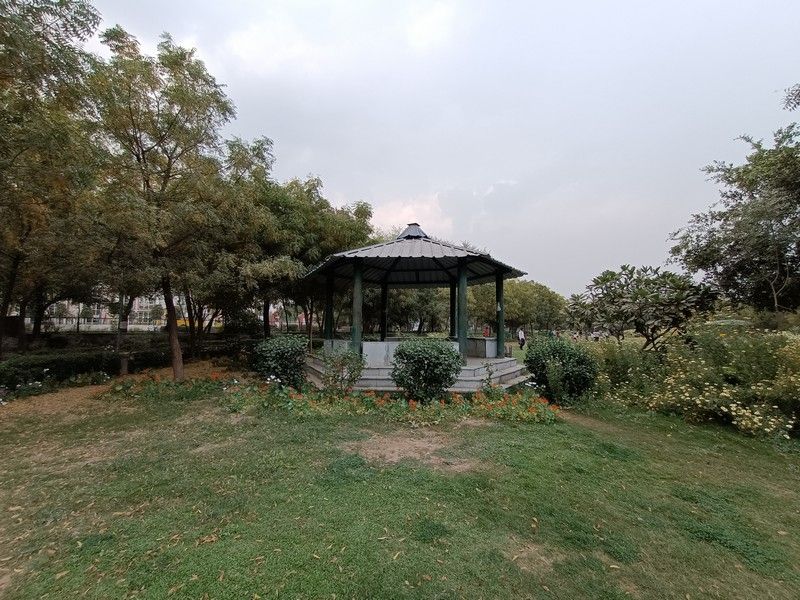 Both devices have 8MP ultra-wide shooters which differ slightly in their field-of-view. The Note 10 Pro Max can pull in 118-degrees while the Realme X7 is a slight shade higher at 119-degrees. To the human eye, this change is more-or-less negligible. What is immediately clear however is that the Redmi doesn’t smoothen out details as much as the Realme X7, as is apparent on the grass at the bottom of the frame. Dynamic range is also slightly better on the Redmi phone, but I prefer the Realme X7’s colour temperature which depicts the overcast weather more accurately. Overall, I would still give this round to the Redmi Note 10 Pro Max. 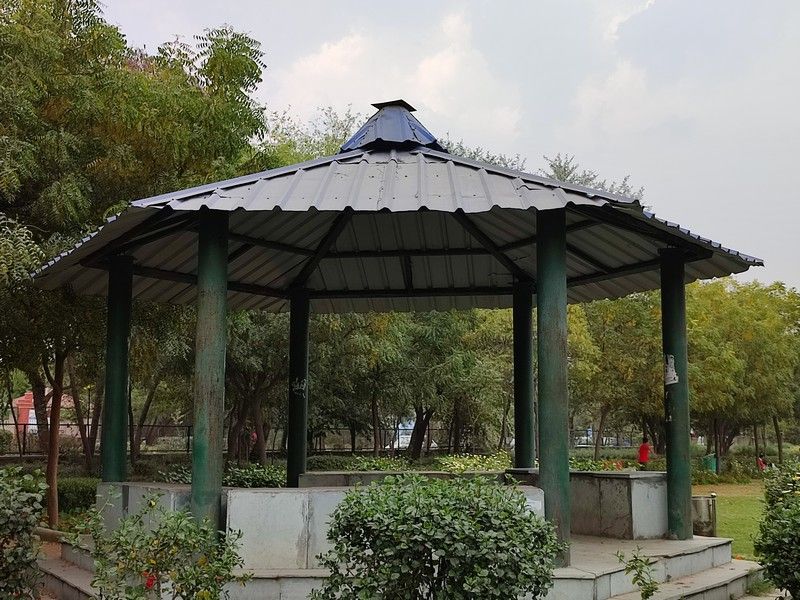 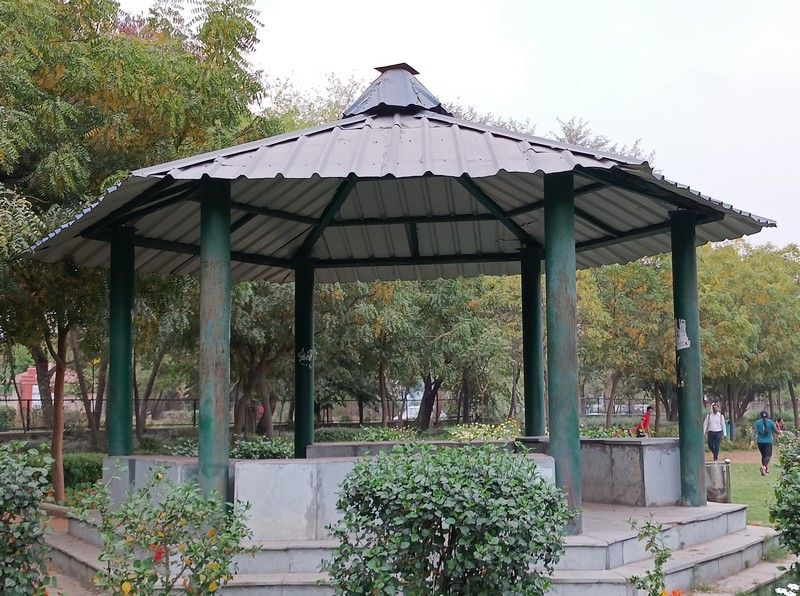 A key difference in the camera layout for both devices is that Redmi Note 10 Pro Max’s 5MP macro shooter also doubles up as a 2X telephoto lens, while the Realme X7 relies on digital zoom. As such, this results in a loss of quality for the latter as it is basically cropping into the primary sensor’s shot. Consequently, the details on the X7’s image are softer (such as the poles on the hut) and the dynamic range is also nothing to write home about, while the colours are also slightly dull. It’s a close call, but overall, it looks like the Redmi takes the lead here. 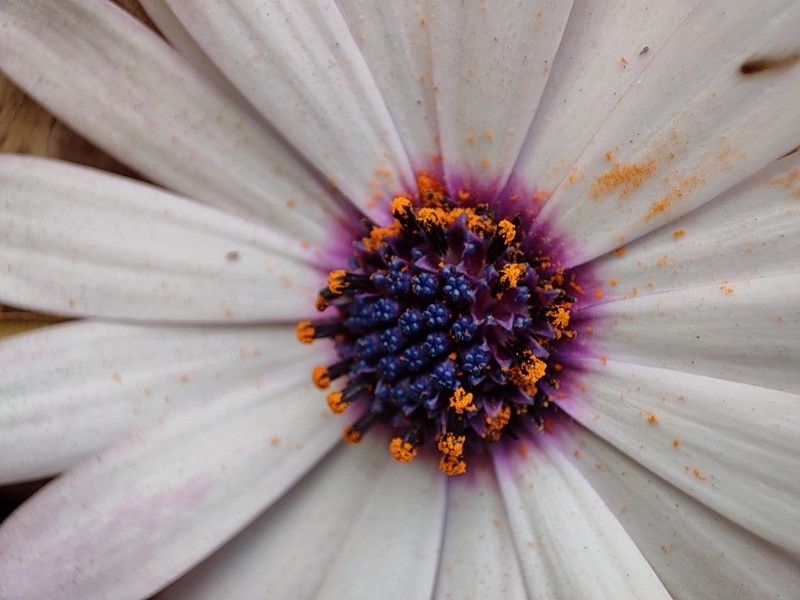 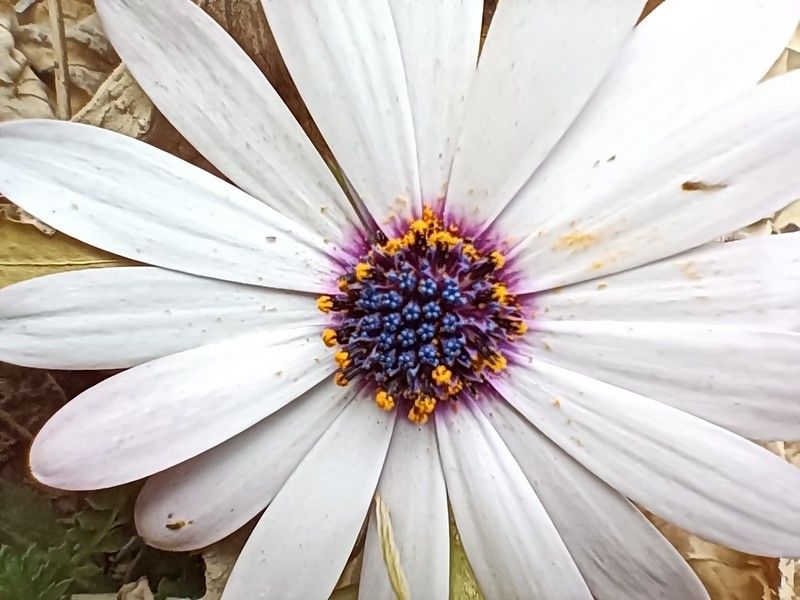 With a higher resolution sensor, the Redmi does pack in a much better macro shooter and it can also get closer to the subject at 2cm as compared to 4cm on the Realme X7. The latter’s output does appear brighter, but the true-to-life colours and the sharp focus on the pollen grains on the flower as captured by the Redmi Note 10 Pro max make it the winner. 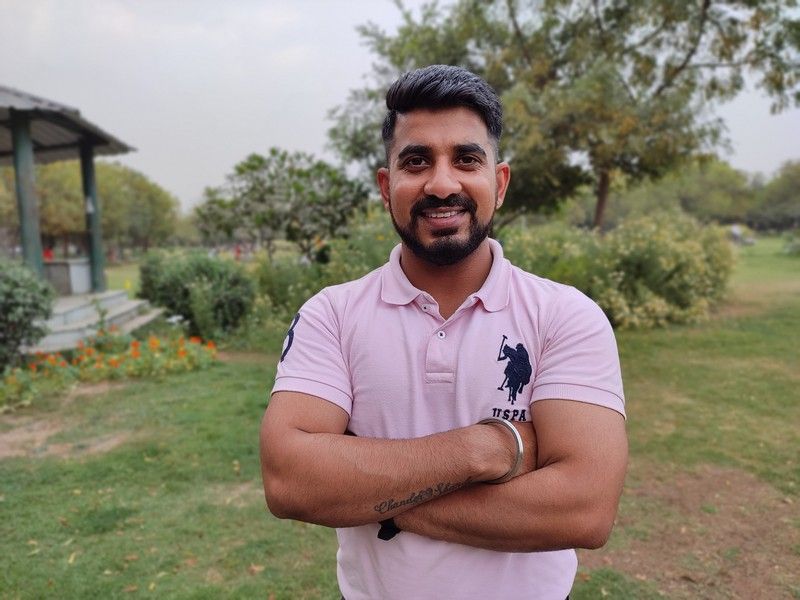 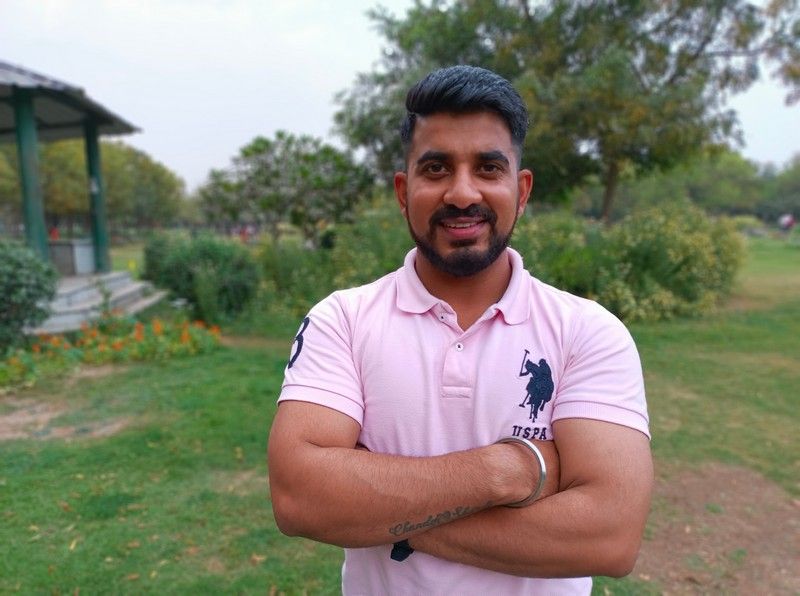 As the Realme X7 does not have a dedicated depth sensor like the Redmi Note 10 Pro Max, the former has to rely on computational photography to separate the foreground from the background. In that sense, the X7 actually does a good job.. but the blur looks slightly forced with details on the subject a bit less in focus. The Note 10 Pro Max, to its credit, shows a nice and soft blur, but slightly oversaturates the colours in the background. I’m calling it a tie. 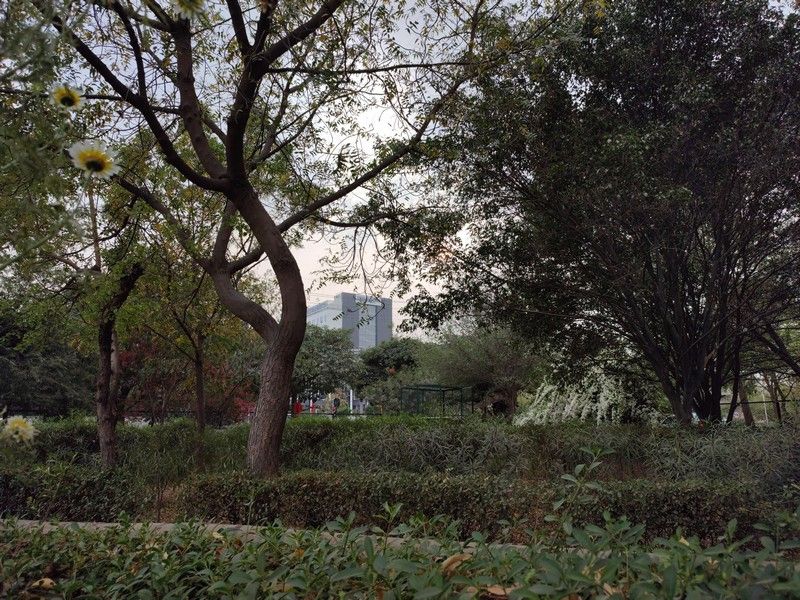 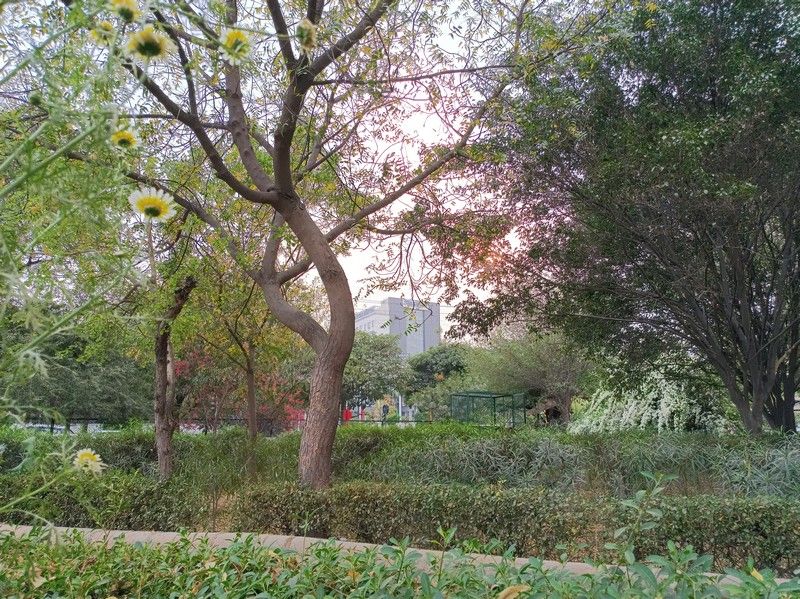 Since both the Redmi and Realme phones have different resolution primary sensors, that will make a difference in the final quality of the shot. In the case of the Note 10 Pro Max, the maximum resolution is 108MP while on the Realme X7 you get a 64MP shot. It is immediately clear that Realme prefers more exposure in its shots, which comes at the cost of dynamic range and the colours do appear more saturated. This is in stark contrast with the Redmi Note 10 Pro Max which keeps the shot underexposed to get in more details around the leaves and doesn’t blow up the sky. Colours have a more realistic tone and you can obviously crop in more with the shot. The Redmi Note 10 Pro wins hands down. 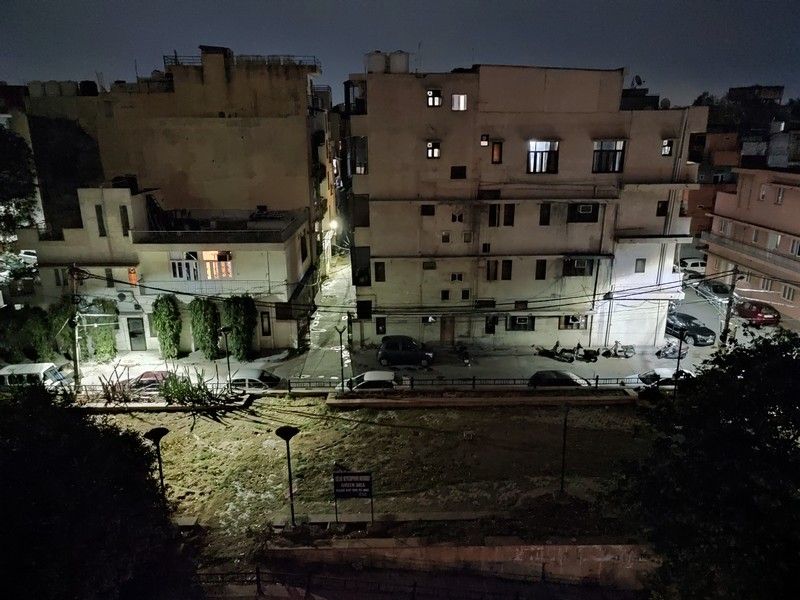 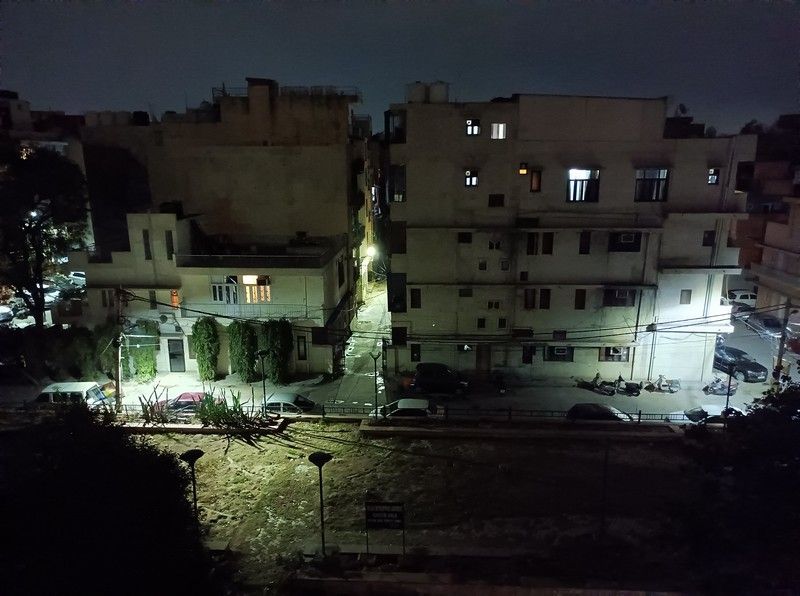 In regular low-light situations assisted by nearby street lighting, both phones can bring out a good amount of detail. I had written in my Realme X7 review about the poor low-light capabilities on the device. However, since then a software update looks to have fixed many of the issues. There is, however, a greenish tint over the entire photo which does look a bit odd. The focus is sharp on objects that are directly in the pool of light from street lamps, while the building still remains in the dark with oversharpening quite prominent. The Redmi actually does a fairly decent job of underexposing the lamps but noise is more prominent in the night sky above. Details on the building are smoothened out here as well but exposed more properly. Both phones score in different aspects of photography here, and show some issues as well, so this one is a tie for me as well. 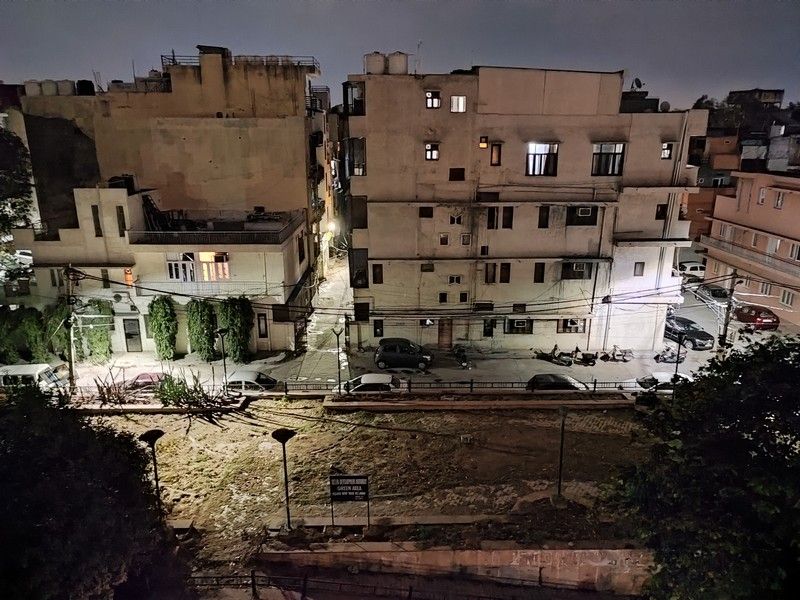 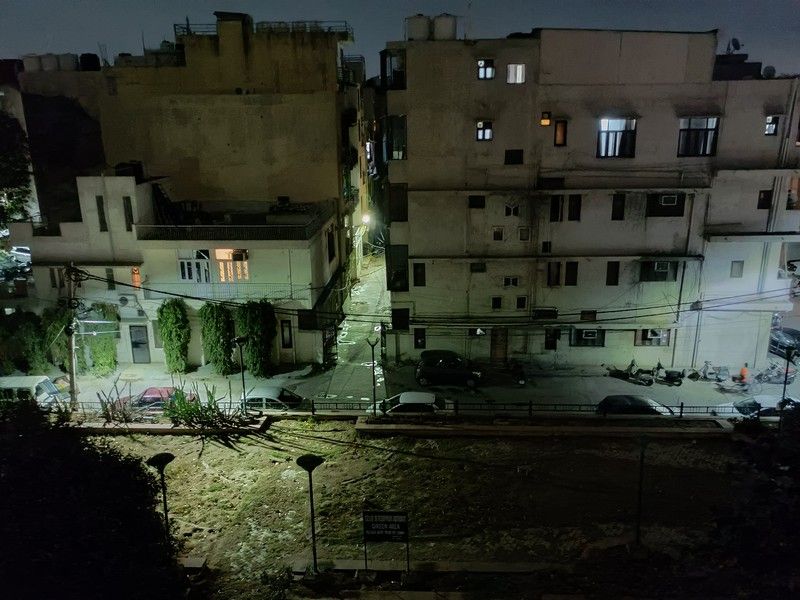 The dedicated Night mode comes to the rescue, but is only effective when the light is very low. In the photo above, the scene does have a substantial amount of external lighting. The greenish tinge is somewhat reduced across the Realme X7’s shot and the colour temperatures are more in tune with real-life conditions. The detailing seemed better with good reflections visible in the puddle of water along the alleyway, and the colours also were more accurately represented. Exposure was still a slight issue in the case of the Redmi Note 10 Pro Max and the colour scheme was undersaturated. However, the phone managed to get in more detail than the Realme X7. This one also looks like a tie. 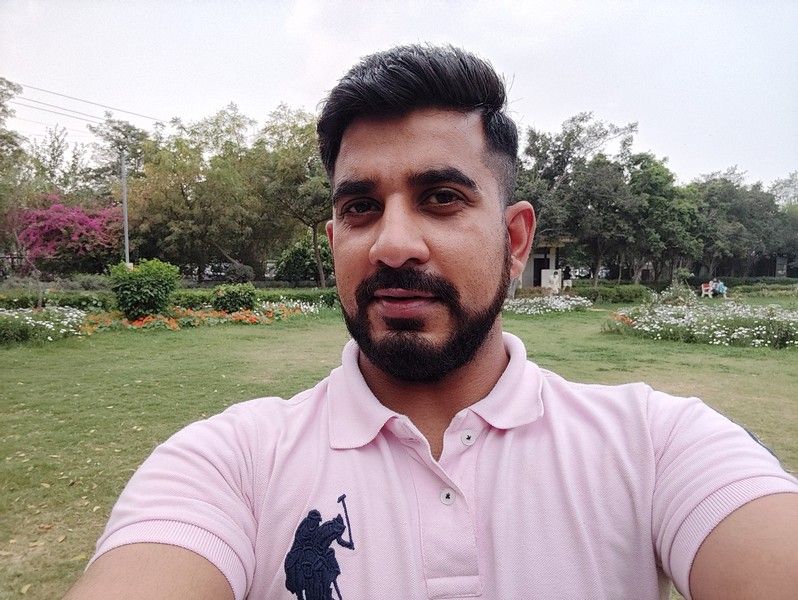 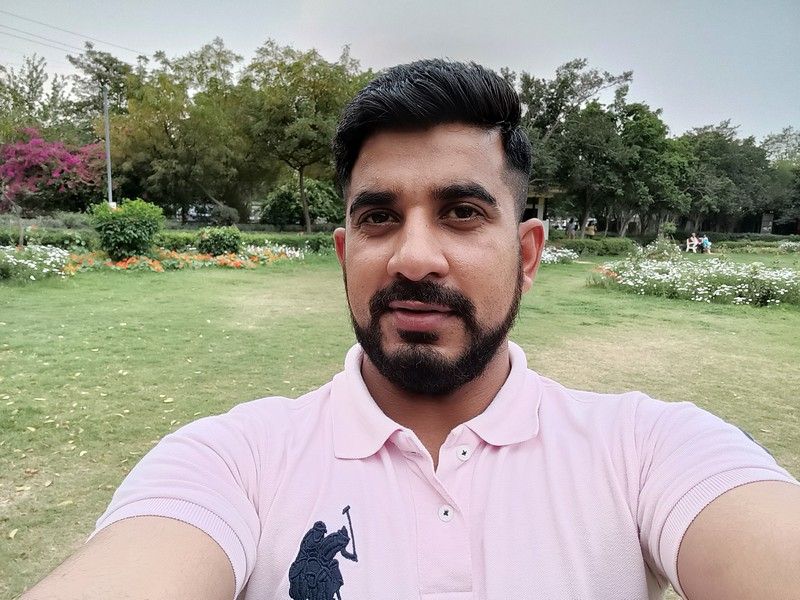 Both devices happen to have 16MP selfie shooters which perform well in their own right. I personally prefer the dynamic range on the Note 10 Pro Max along with the representation of the skin tones. However, the colours on the sky look much better on the Realme X7. Again, it seems to be a case of one phone scoring high in some aspects, with the rival scoring high in others. Therefore, a tie is what I’ll settle for.

I think it was increasingly clear from the get-go that the Redmi Note 10 Pro Max would be the eventual winner in this competition. The new ISOCELL HM2 sensor with higher resolution and bigger sensor size mixed with better computational photography is a recipe for great photos. That being said, the Realme X7 doesn’t fare too badly either, especially in low-light conditions where it is apparent to what extent Realme has improved its night photography algorithms in recent times. In sum, the better camera experience lies with the Redmi Note 10 Pro with the phone winning five out of the nine scenarios. I am however, quite excited with what Realme would be introducing with its new Realme 8 series, with at least one phone also expected to feature the 108MP ISOCELL HM2 sensor.