91mobiles.com
Home Comparisons Redmi Note 10S or Realme 8: which is the one for you? 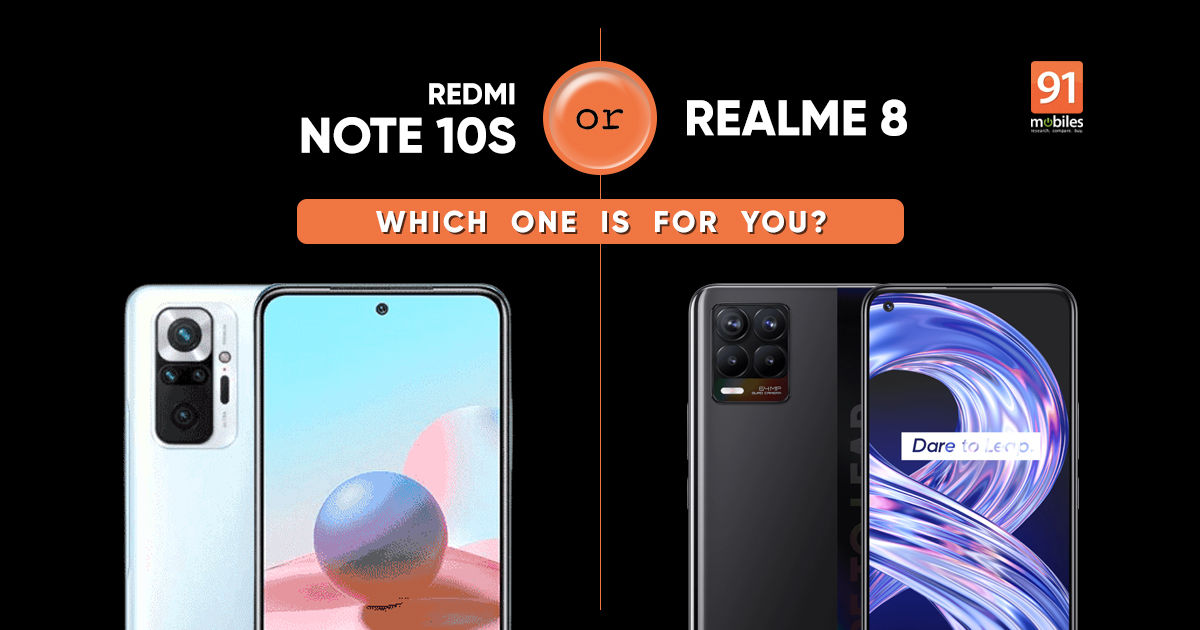 The Realme 8 and the Redmi Note 10S. They both come from brands that sound similar but are bitter rivals. They have remarkably similar configurations. And they both come with the same official price tag, making them among the best options for anyone looking for a smartphone with a budget of around Rs 15,000. But which of these two is the better option for you? Let me try to help you make up your mind:

This is a clash between the conventional and the radical. Yes, both phones have got tall displays with small bezels and punch hole notches and plastic backs, and both phones are almost the same height (about 160mm) and weight (about 178 g), although the Realme 8 is slightly slimmer and less wide. But there the similarity ends. 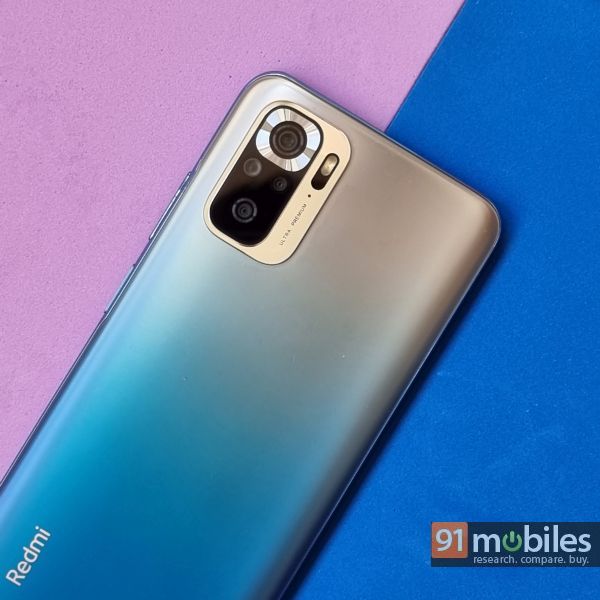 The Redmi Note 10S (above) has rather typical Note looks with a slightly glossy back whose colours change (especially on the blue edition) depending on the light falling on it. On the other hand, the Realme 8 (below) has a much more plain colour scheme (silver and black), but is marked by a huge “Dare to Leap” logo that is vertically placed opposite the camera unit. The camera unit also is handled differently – the Realme 8 has its cameras in a square, while the Redmi Note 10S has it in a rectangular shape with very rounded edges and even has a broad silver ring around the main sensor. The Redmi Note 10S has a punch hole in the top centre while the Realme 8 has it in the top left corner – which is better depends on your preference. Finally, the Note 10S comes with an IP53 rating which makes it splash resistant, while the Realme 8 has no such protection 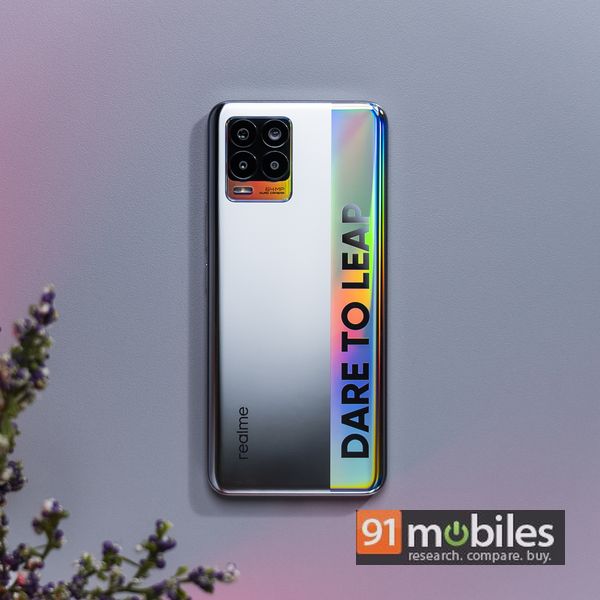 Unless you are a fan of massive logos, the force is definitely with the Redmi Note 10S here. The Realme 8 is for those who dare to flaunt that “dare to leap” message. 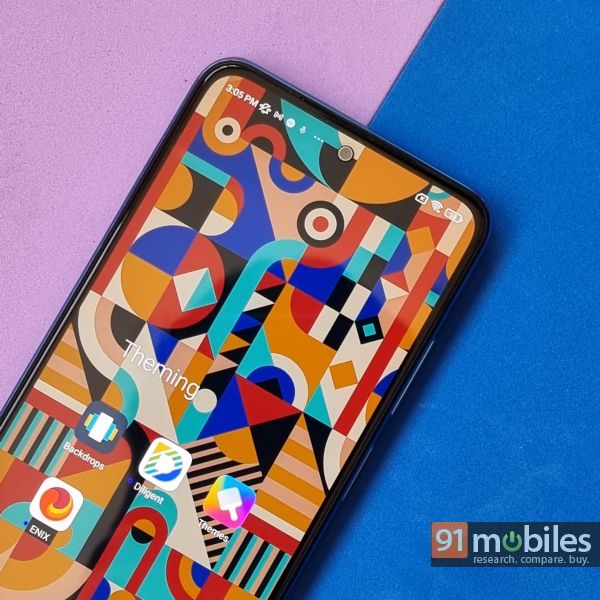 It is really a clash of two full HD+ AMOLED displays here. Both are almost the same size – the Realme 8 is 6.4-inches, while the Note 10S is 6.43-inches. And they are both impressive enough for their price points, with neither having got into the refresh rate game (both have a 60Hz refresh rate). If I had to pick one, I would go for the Note 10S because its colours just seemed to “pop” a little more, but I can see others liking the Realme 8 too. It is a very close call, though.

This is an absolute tie. Both phones come with the MediaTek Helio G95 processor, which is known for its gaming prowess. It has been around for a while but it is known as a performer! 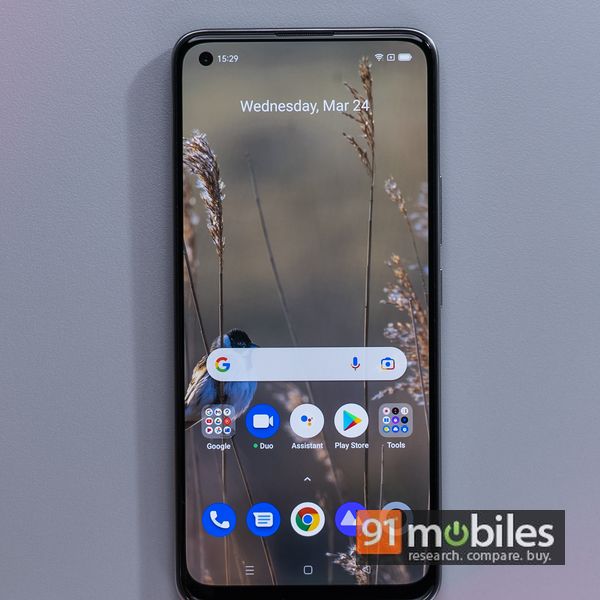 This is where it gets interesting. While the Note stresses on having more RAM, the Realme 8 focuses on more onboard storage. The base variant of the Note 10S has 6GB RAM and 64GB storage, while the Realme 8 starts with 4GB RAM and 128GB storage. The Redmi Note 10S has two variants, 6GB / 64GB and 6GB / 128GB, while the Realme 8 has three: 4GB / 128GB, 6 GB / 128GB and 8 GB /128 GB. Redmi scores on having more RAM at the base level, Realme has the edge on more RAM at its top level and more storage at its base level. Both phones come with expandable storage, but in terms of fixed storage, the Redmi Note 10S comes with UFS 2.2 storage, while the Realme 8 comes with UFS 2.1, which is slightly slower. It is really a very close call. So close that all things considered, I am calling this one a tie. 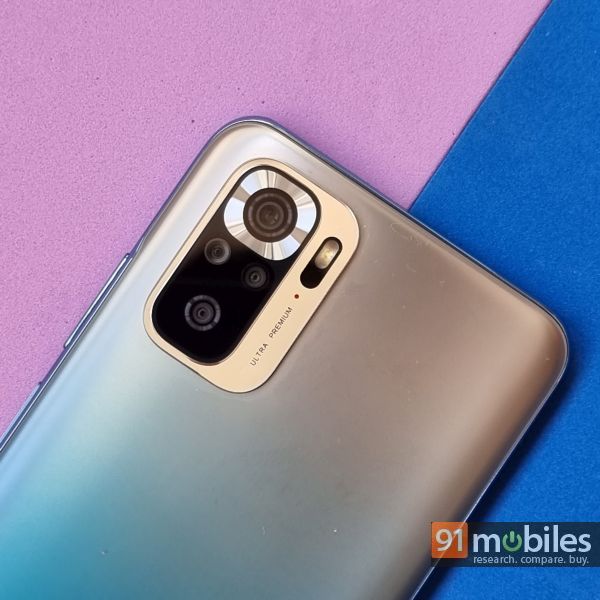 Both phones come with 64 megapixel main sensors, an 8-megapixel ultrawide and two 2-megapixel depth and macro sensors. Neither has OIS, and although the Realme 8’s main sensor has a slightly larger aperture, the difference in performance between the two phones’ cameras is not exactly outstanding, Both are very good performers in normal light conditions, and while the Realme 8 seems to have an edge in low light conditions, the Note 10S is much better in the video department. Similarly, the Note 10S seems to get a few more details, while the Realme 8 gets brighter colours at times. The ultrawide sensors of both phones are decent without being spectacular and the macro and depth sensors seem largely ornamental, alas. Another tie? Am afraid so. 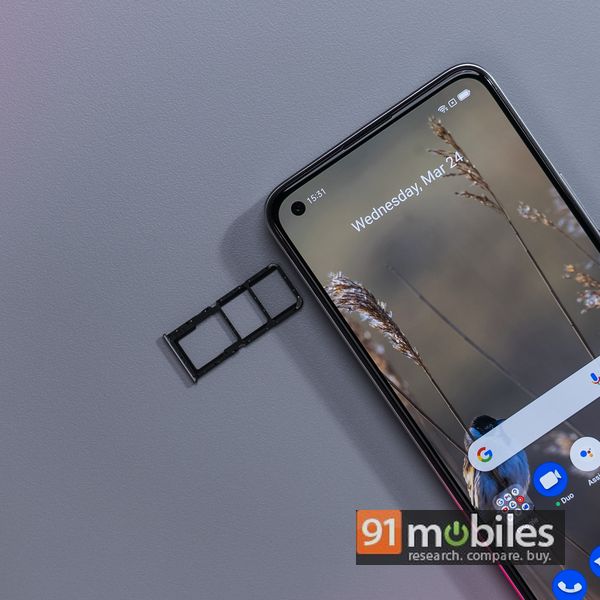 The Realme 8’s 16-megapixel front-facing camera takes this one easily, delivering better colours and more detail than the 13-megapixel snapper on the Note 10S, which often ended up delivering slightly dark results in my opinion. 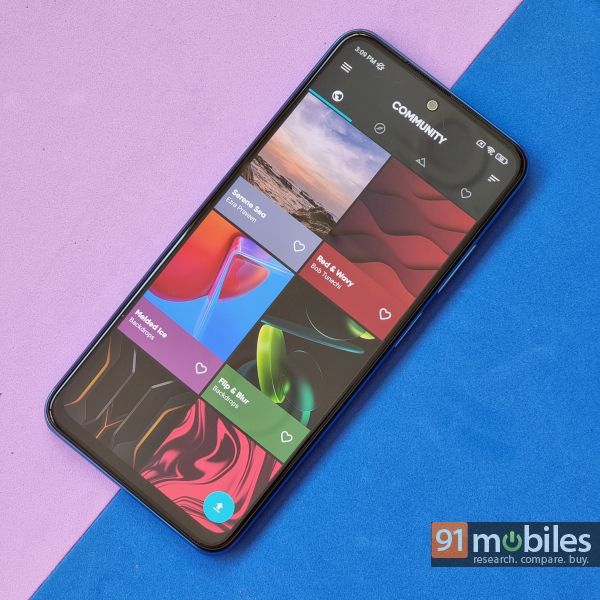 With largely similar displays, processors and with 6GB and 8GB RAM on their highest variants, both these phones are neck-and-neck when it comes to gaming and multimedia. The Helio G95 is rightly acclaimed for its gaming performance and it shines on both devices. You will be able to run almost all major titles on them with a certain degree of ease, although we would recommend turning down the settings for some of the more graphics-heavy ones. The stereo speakers of the Note 10S win the round for it, allowing one to get a much more intense gaming and viewing experience. The Realme 8 has a decent speaker and its sound over headphones (yes, both phones have a 3.5 mm jack) is good too, but it cannot match the quality of the stereo speakers on the Note 10S. 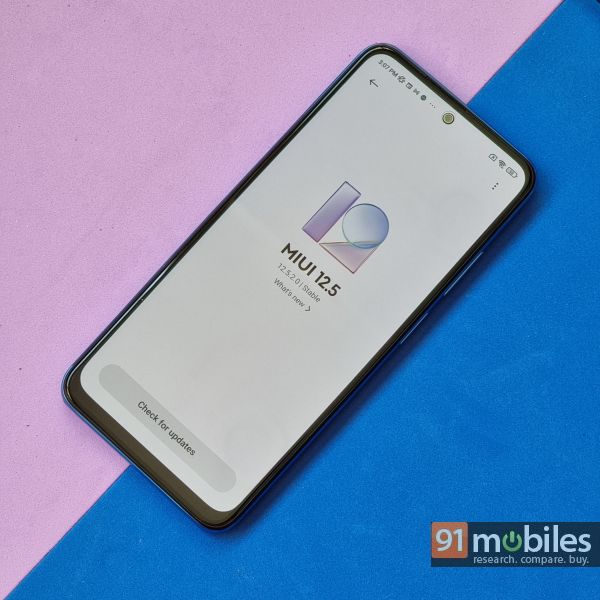 This is where the Note 10S really pulls away from the Realme 8. While both phones run Android 11 with their manufacturers’ skins over them, the Note 10S comes with Xiaomi’s latest MIUI 12.5, which is a cleaner and almost bloat-free version with no sign of the ads that used to plague MIUI. It is a very clutter-free UI and manages to retain a number of tools even while giving you the option to uninstall many apps, including Xiaomi’s. The Realme UI on the Realme 8 is a good one as well, but is not in quite the same league – perhaps a big update will bring it close.

In terms of routine day-to-day tasks, we felt that the Note 10S had a slight edge over the Realme 8, mainly because of its cleaner, sleeker interface. Mind you, both handled tasks like messaging, Web browsing, social networks and basic image and video edits equally well. When it came to handling calls too, both phones were at par. The Note’s “on the side” fingerprint scanner however worked a lot faster than the in-display one on the Realme 8, and well, those who fancy controlling household gadgets with their phone will love the infra-red port on the Note 10S. The fresher interface of the Redmi Note 10S wins this one for it, but honestly, the difference is very small. 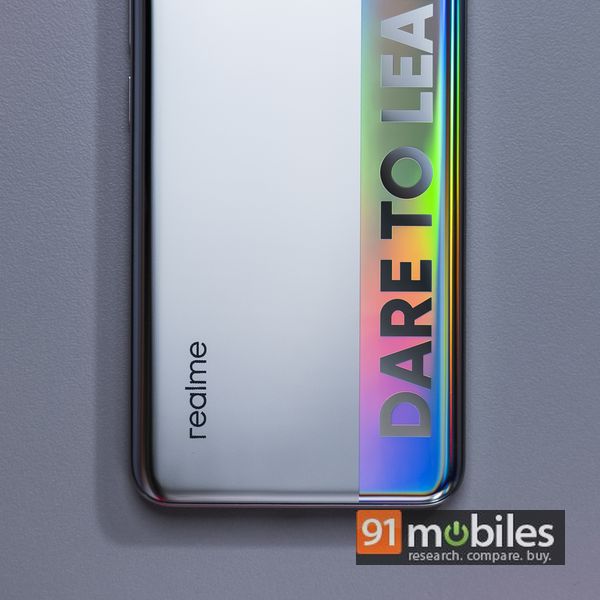 Both phones come with 5,000mAh batteries, and with support for fast charging. And both will generally see off a day and a bit of usage – I expected more, given the size of the battery, but then many say the G95’s battery management is not on par with what we get from comparable Qualcomm processors. It is in the charging process that the two phones differ a little – the Note 10S comes with a 33W charger in the box while the Realme 8 has a 30W one. The difference in charging speeds is not massive – both take a little more than an hour to charge, although interestingly, the Realme 8 seemed to charge a little faster. But the difference is merely of a few minutes. Another tie here, 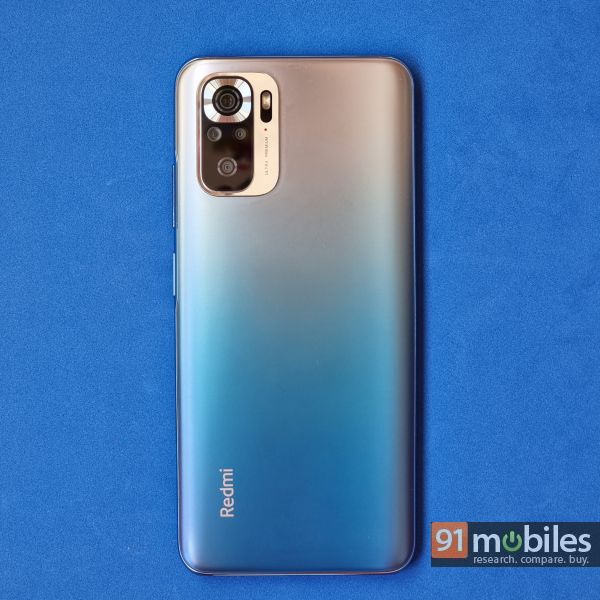 The price tag of the base models of the Realme 8 and Redmi Note 10S is the same – Rs 14,999. However, the Note 10S comes with a 6GB / 64GB configuration, while the Realme 8 sports a 4GB / 128GB one. Both phones also a 6GB / 128GB variant at Rs 15,999. The Realme 8 takes a slight edge by having an additional 8GB / 128GB variant for Rs 16,999. Given the fact that both phones have expandable memory, I think the Redmi Note 10S gets an edge on the base model by offering more RAM which will have a greater impact on performance than storage. That said, the Realme 8 does have an 8GB RAM variant, which is just Rs 1,000 above the top variant of the Note 10S which is 6GB / 128GB. I know there will be some who will be getting fed up of the sound of this, but this is another tie, with the Note 10S winning on the base model and the Realme scoring on the top one.

Which one to go for? 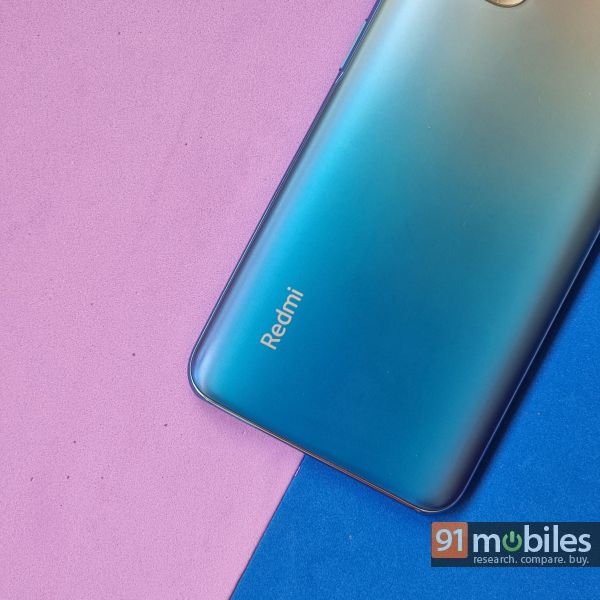 On paper, you would think that the Note 10S has this all sewn up, winning on five parameters as compared to just one win by the Realme 8. But the real point to note is that the two phones tie on as many as five parameters and they are all important ones – processor, battery, price, rear cameras and RAM and storage. It is therefore a much closer call than the overall numbers indicate. I would however lean towards the Note 10S simply because of MIUI 12.5 and those stereo speakers, which make a significant difference when one is consuming multimedia talent. The Realme 8 runs the Note 10S close, but the real difference between the two is that the latter has MIUI.
ShareTweetShare
Share

Amazon Great Indian Festival sale 2021: Redmi Note 10S available at its lowest-ever price, here is why you should buy it