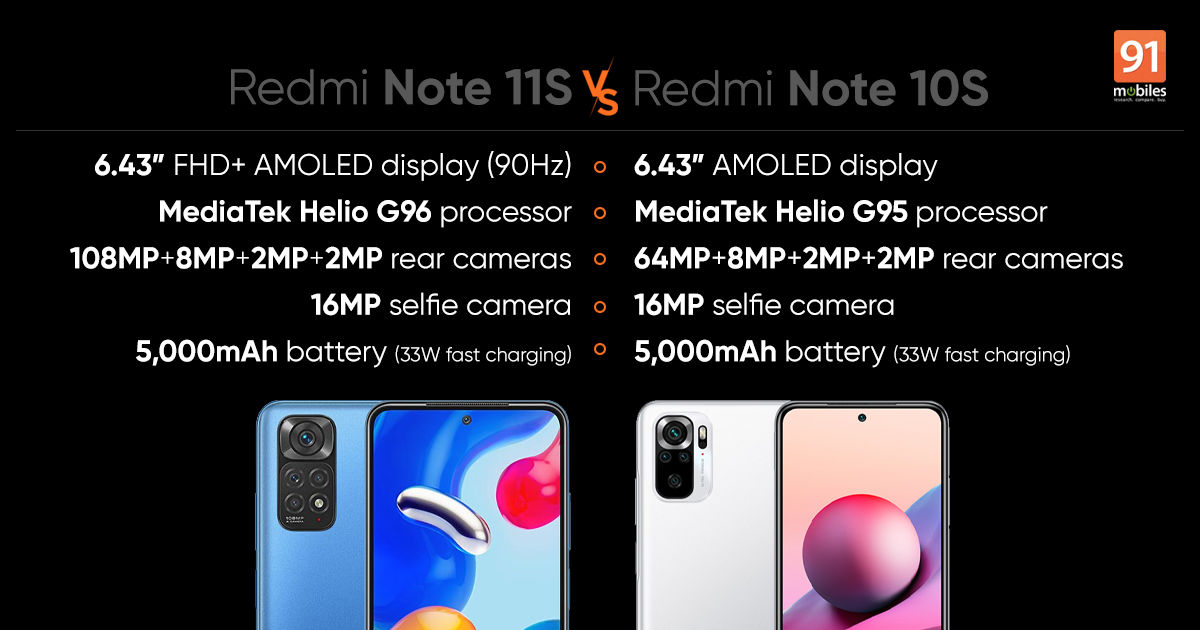 Redmi Note 11S has been officially launched in India as the successor to last year’s Redmi Note 10S. This phone is a mid-range device that offers good hardware and boasts a 108-megapixel camera setup. The Redmi Note 11S was unveiled globally last month alongside other phones in the Note 11 series. In this article, we’re going to be comparing the Note 11S with its predecessor, the Redmi Note 10S. The new phone offers improvements in the hardware and design department. Let’s take a look at the differences between the two phones in terms of specifications, features, cameras, price, and more.

Meanwhile, the older Redmi Note 10S still retails at Rs 14,999 for the base variant, which comes with 6GB RAM and 64GB storage. The higher storage option with 128GB is available for purchase at Rs 15,999. Redmi recently also launched an 8GB RAM variant with 128GB storage, which is priced at Rs 17,499.

The newer Redmi Note 11S looks more premium compared to the older Note 10S. This is because the new phone features a glass back and flat edges, which gives it that expensive look and feel. The Note 11S also has a slightly re-arranged rear-camera module, and of course, higher resolution cameras. The phone continues to feature a centrally located hole-punch cutout on the front, just like the predecessor. It has the volume buttons and the power button on the right side, again, a similar design to the outgoing Note 10S.

Both smartphones feature slim bezels on the front with a minimum bottom chin. However, there is a big difference in design when you look at the frames. The Redmi Note 11S has a flat frame with rounded edges, whereas the Note 10S features a curved frame. That and the rear camera layout is the only major aesthetic differences between the two phones. On another similar note, both phones also offer an IP53 water resistance rating and power button mounted fingerprint scanners.

Both the Redmi Note 11S and Note 10S are available with 6GB RAM, which is couple with either 64GB or 128GB of storage. A new Note 10S variant was recently launched with 8GB RAM as well. The smartphones also feature a microSD card slot for storage expansion.

Coming to the displays, both Redmi Note 11S and the older Note 10S come with a 6.43-inch AMOLED display that features a centrally located punch-hole camera cutout. The difference between the two arises in the refresh rates. The newer phone offers 90Hz refresh rate compared to the 60Hz on the older Note 10S. Both devices offer Corning Gorilla Glass 3 protection on the front, and offer an Eye-care mode.

If you look from the front, both smartphones will look identical as they have similar screen sizes, hole-punch cutout location, and bezel size.

In the camera department, there are a couple of differences between the two phones. While both phones offer a quad-rear camera setup, the sensors are different, well, at least the main sensors are. The camera module is also different on both phones and an easy way to tell them apart.

In terms of connectivity, both phones offer pretty much the same options. You get 4G LTE dual SIM support, dual-band Wi-Fi, Bluetooth 5, GPS, NFC, Infrared port, a 3.5mm headphone jack, and a USB Type-C port for charging and data transfer.

Batteries also remain the same between the two phones. You get a 5,000mAh battery on both the Redmi Note 11S and Note 10S. The phones also offer support for 33W fast charging, which should help top-up the charge on the devices in no time.

If we had to pick between the two phones, we’d most definitely go with the newer Redmi Note 11S. The phone features a 90Hz refresh rate display, a 108-megapixel primary rear camera, a higher resolution 16-megapixel selfie camera, and a slightly faster processor, all for only a few thousand rupees more than the older phone. It’s a no-brainer really, to choose the newer Redmi Note 11S, as it’s certainly a better buy that comes with improved design, and upgraded features.