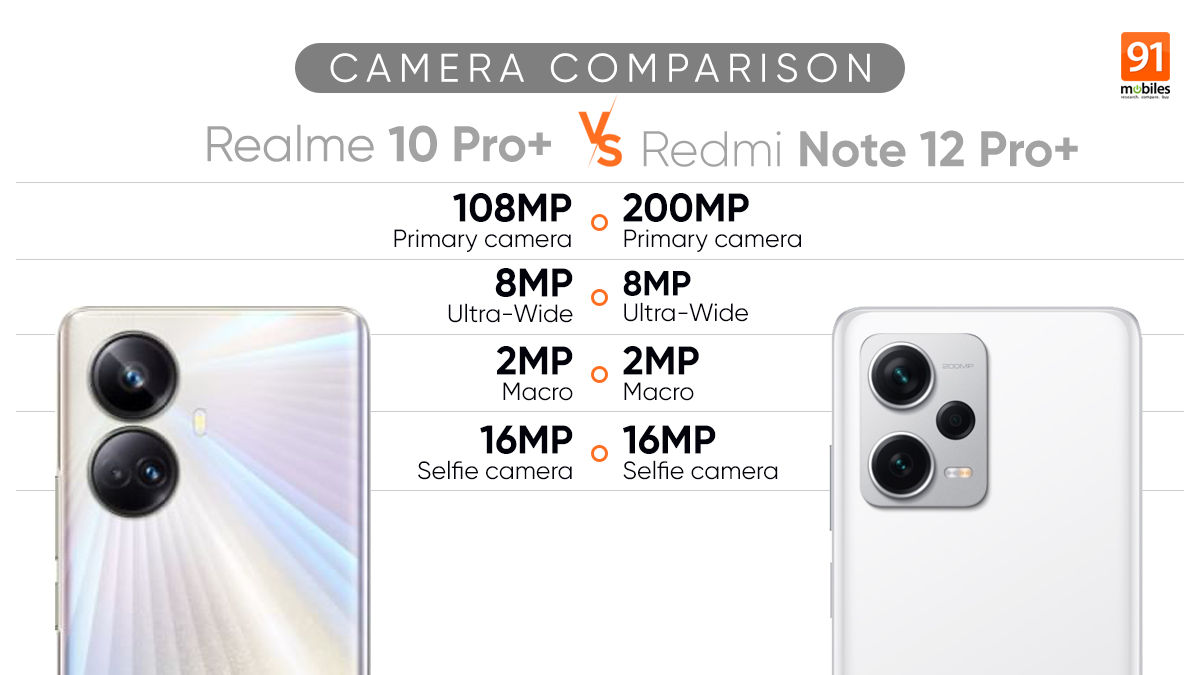 Finally, following a long wait, Redmi’s Note 12 series has been launched in India. The series consists of the Redmi Note 12, the Note 12 Pro and the Note 12 Pro+. On one hand, the Note 12 and Note 12 Pro have 48MP and 50MP primary cameras respectively, while the Redmi Note 12 Pro+ is equipped with a much-hyped 200MP camera. To check if the camera of this smartphone is indeed something to brag about, I pitted the phone against a different Pro+ phone, the Realme 10 Pro+. In this comparison, we’ll see which phone is the real ‘PRO’ in terms of photography. 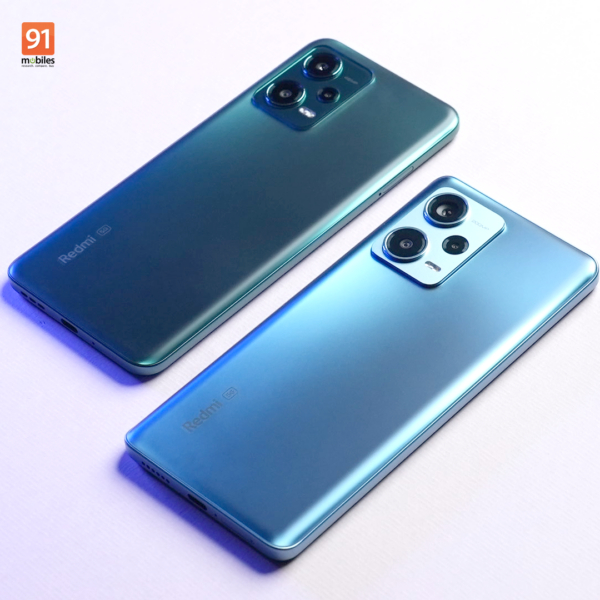 Let’s start with the high-res shot first, as mentioned earlier, Redmi Note 12 Pro+ features a 200MP primary camera whereas the Realme 10 Pro+ is equipped with a 108MP primary snapper. You can observe that the colour tone and saturation are different in both photos. Redmi’s photo, in my opinion, is somewhat better than Realme’s shot, as it has more vibrant colours, higher contrast level and better colour balance. 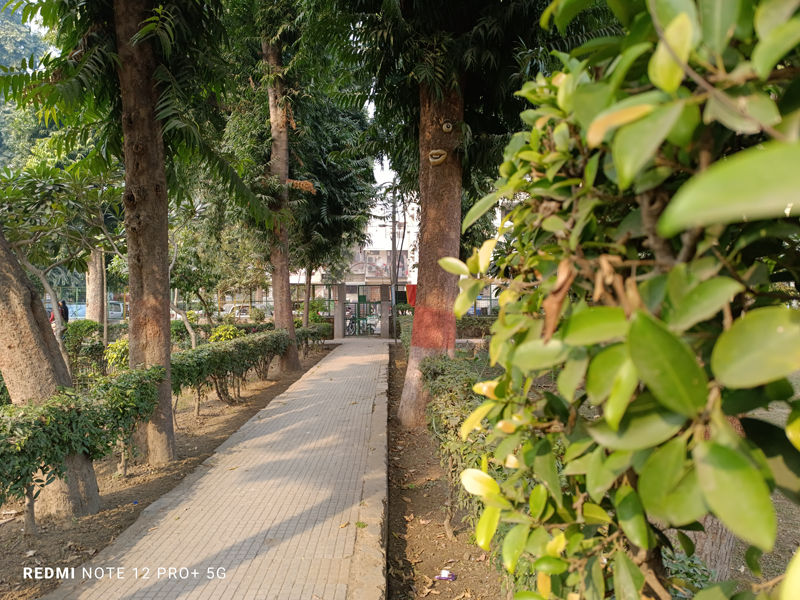 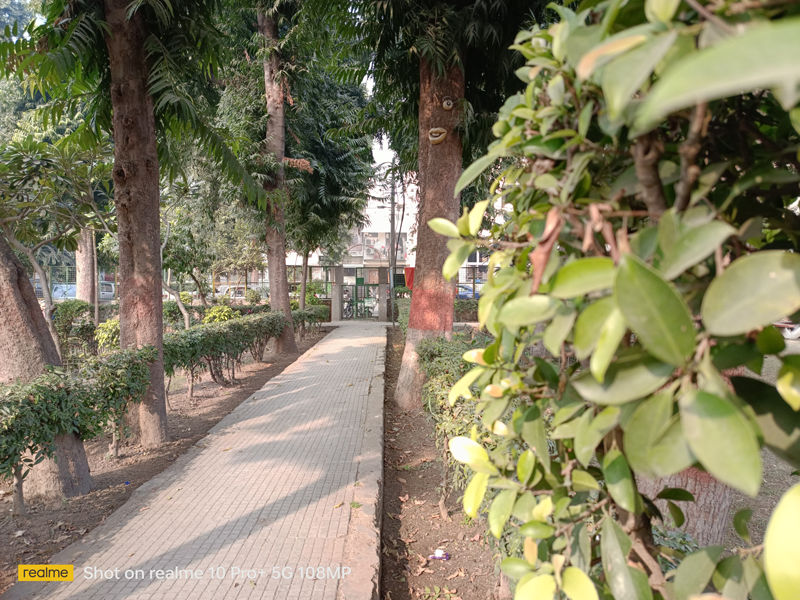 Realme 10 Pro+ appears slightly washed out, with a thin layer of cooler tone in the picture. Also, when we zoom into the picture to see the true high-res quality, you can notice that the text on the board appears to be considerably sharper on the Redmi Note 12 Pro+ than on the Realme 10 Pro+. We can say that Redmi is actually getting the benefit of more megapixels in this round. 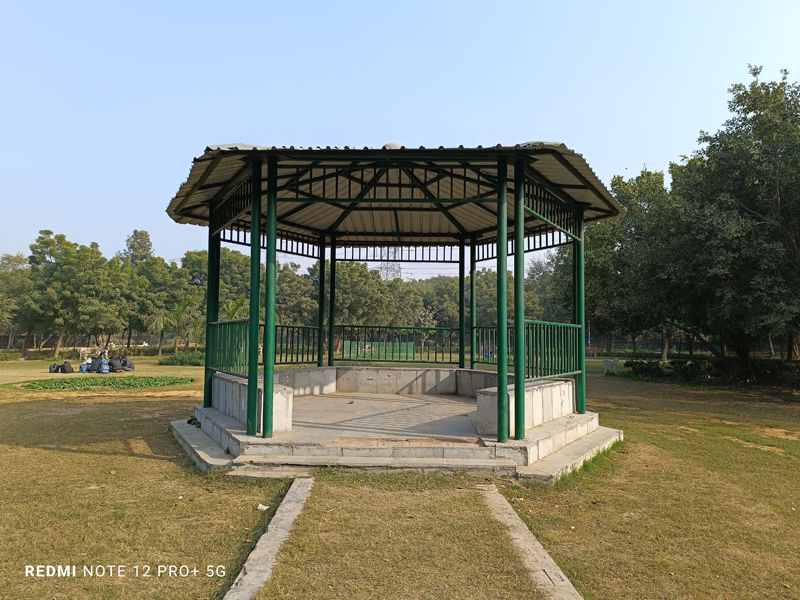 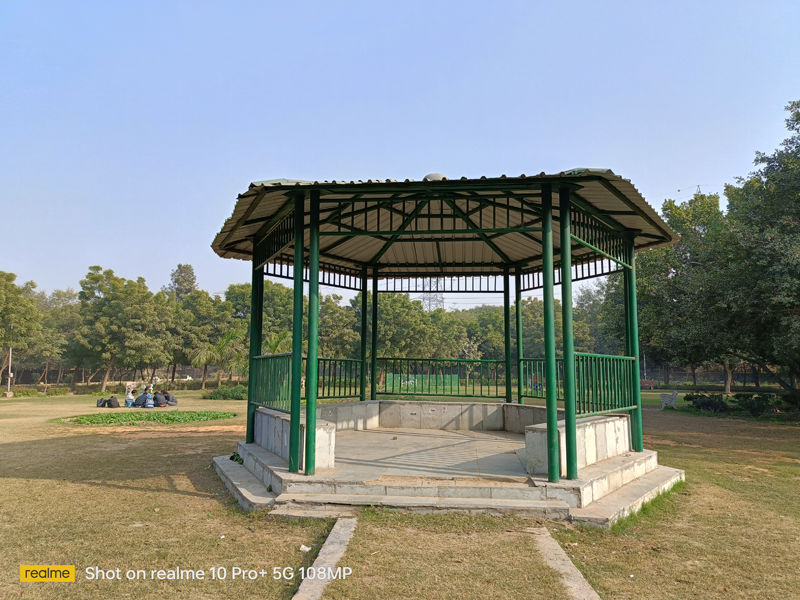 Next up, is the regular shot taken from both phones with HDR being on Auto. At first glance, there isn’t much of a difference in both the images but when you take a closer look, you can observe that the picture clicked from Realme 10 Pro+ appears to be somewhat more saturated than the Redmi Note 12 Pro+. The sky on Realme’s photo seems artificially blue which in Redmi looks natural to some extent. Although, the detail on both shots is almost identical and I couldn’t find much difference in these pictures. I think we can call this round a tie between both phones.

Now, both phones feature an 8MP ultra-wide angle sensor. However, the specifications of both sensors are different. On one hand, Redmi’s sensor is 119 degrees wide, the Realme phone has a 112-degree wide sensor. This difference is clearly visible in both images, the picture captured from Note 12 Pro+ is up to some extent wider than the photo taken from Realme 10 Pro+. Also, Redmi Note 12 Pro+ is capable of capturing images that are near to natural. 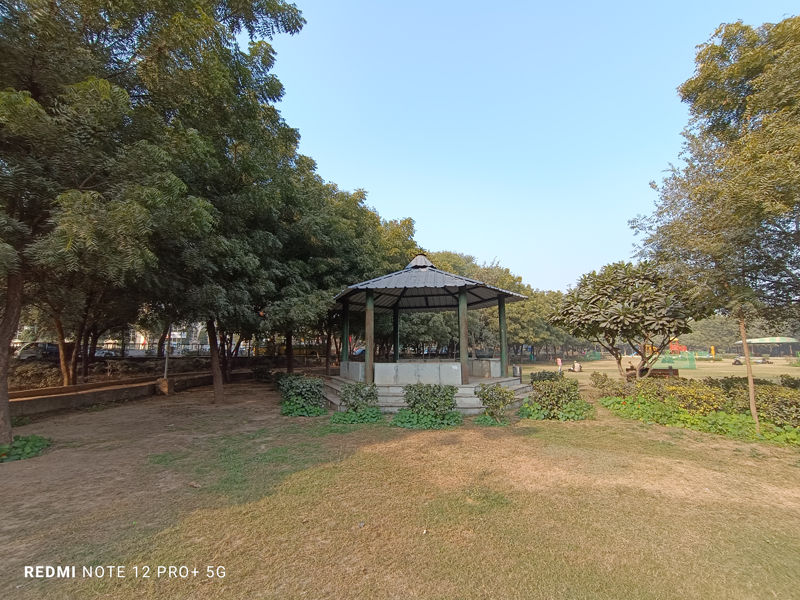 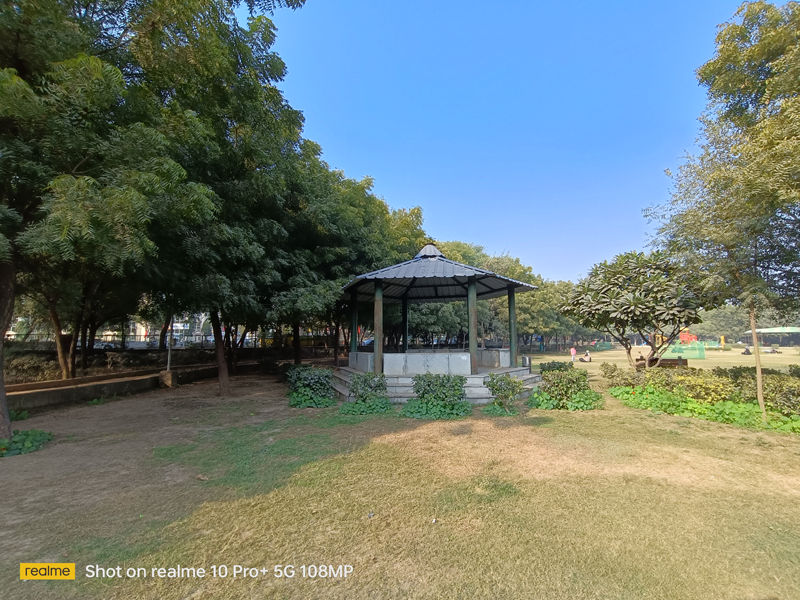 The colour balance on Realme’s image looks unnatural, as there is a layer of blue tone on the image, which is quite literally visible in the sky, trees and grass. Therefore, this round clearly goes in favour of the Redmi Note 12 Pro+.

Coming to close-up photography, the results seem to be different from other pictures, as the image that I took from Realme 10 Pro+ has a vibrant yet near to natural colour tone. It is clearly visible that the plants on the left corner are properly exposed on Realme’s photo with bright sunlight which was the real scenario, whereas the Redmi Note 12 Pro+ suppressed the light and increased the saturation in the green area. 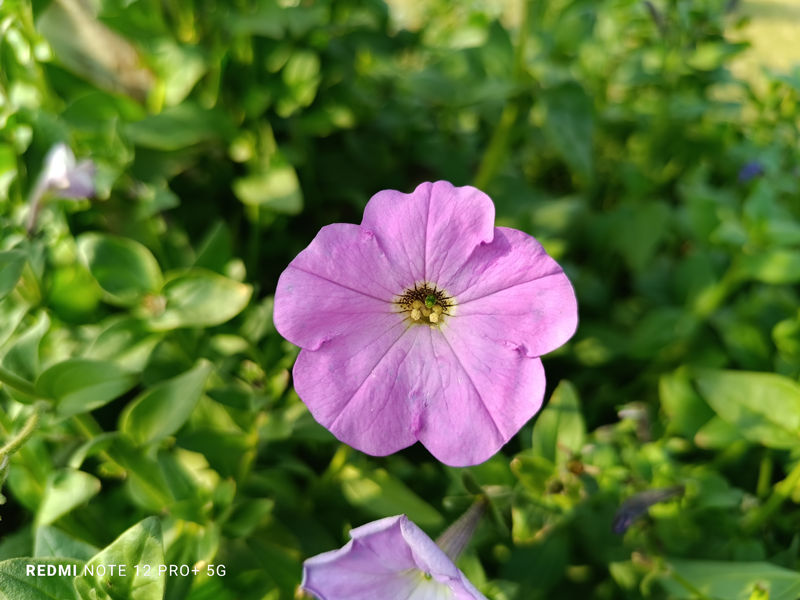 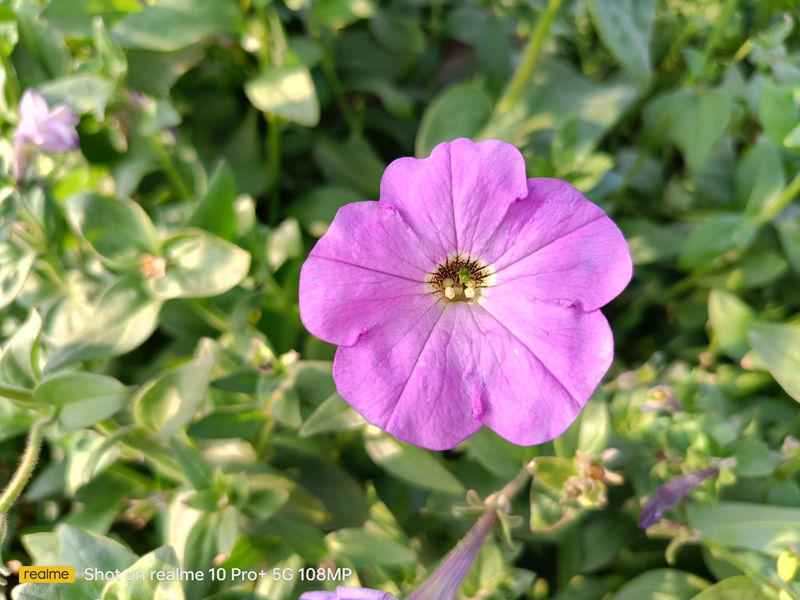 In fact, when I zoomed the pictures to full crop, I observed that the pollens on Realme’s shot were sharper and crisper as compared to the Redmi’s photo. As a result, Realme leads this round and becomes the winner.

The pictures below were taken in portrait mode on both phones, and again there is a negligible difference between the two. Both the Redmi Note 12 Pro+ and the Realme 10 Pro+ are capable of capturing vivid human skin tones with somewhat close to natural colour balance. Whether it’s my orange sweater or the green area in the frame, these photos are well captured and came be uploaded on social media without any alteration in the colours. 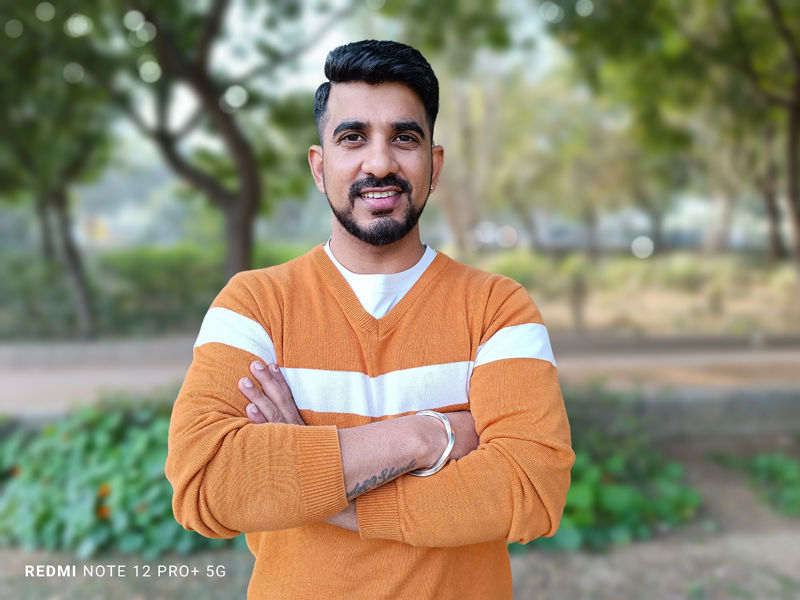 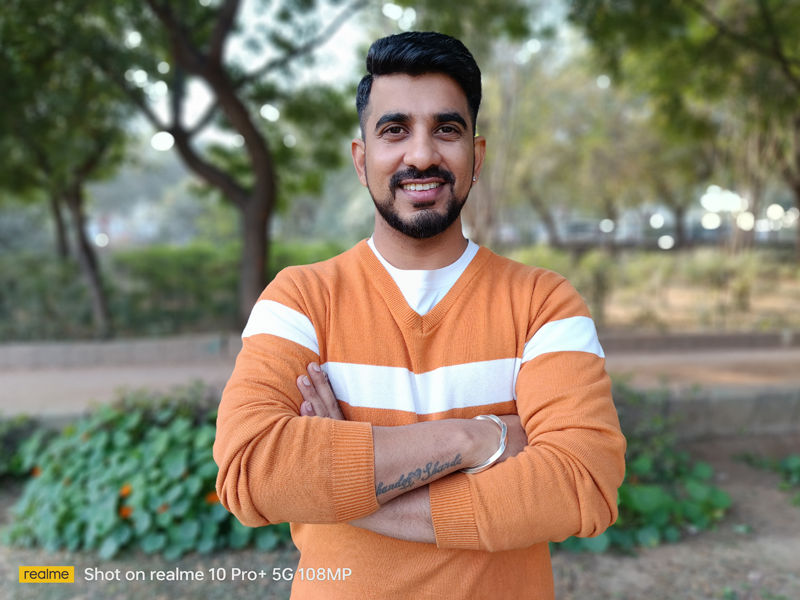 Also, at full crop, I didn’t notice any difference in edge detection among both images. However, if you take a closer look at the pictures, you will find that on the one hand Redmi’s shot is slightly more exposed than Realme’s photo, on the other hand just like the previous shots, there’s a slight blue tone in the images shot from Realme 10 Pro+. Nevertheless, these are minor differences that can be ignored, to render this round as a draw between the Redmi Note 12 Pro+ and the Realme 10 Pro+. 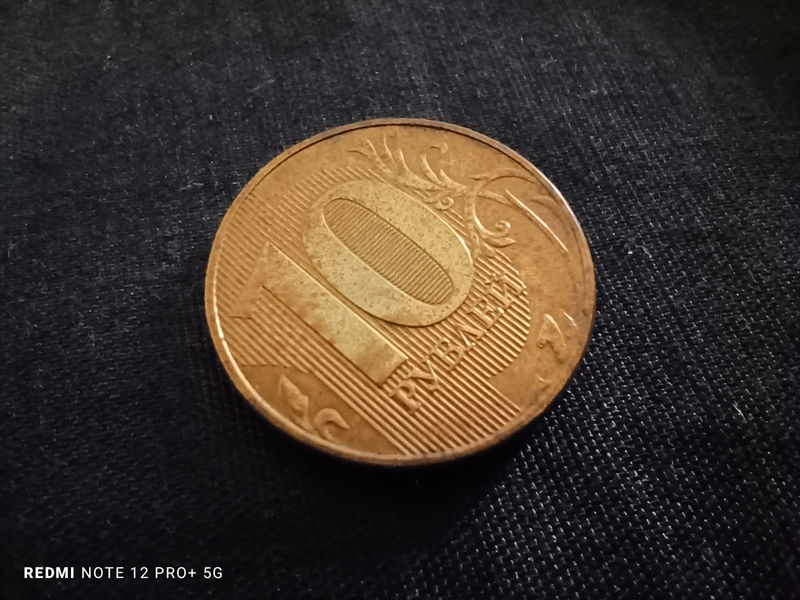 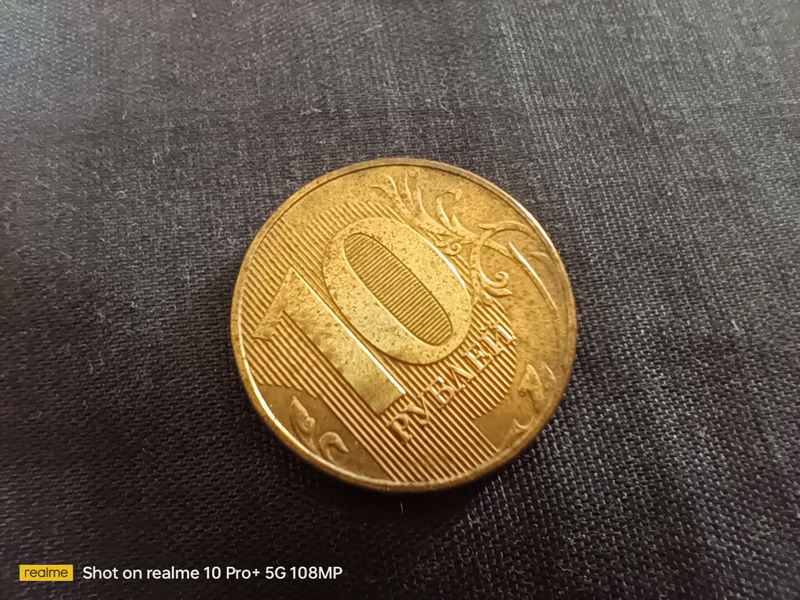 These 2MP macro sensors seldom give decent results, but I did test out the macro sensors of these phones to see which of the two is capable of capturing better photos.  I clicked a picture of this Russian currency note that I had saved from my visit to Moscow. It’s evident in the snaps that the picture taken from Redmi Note 12 Pro+ is slightly washed out, dark, and lacks sharpness. In contrast, the output from Realme 10 Pro+ is well-lit and has the right amount of sharpness. Hence, this round is won by Realme 10 Pro+.

After reviewing all of the daylight shots, it is time to examine low-light images. The above photos were clicked in a low light scenario with the camera settings set to auto. Here, even you can judge that Realme captured a very pleasant picture, with the dark sky and appealing colours. In contrast, the Redmi shot is very bright in which the sky looks grey, however, if you notice the Haldiram’s and City Centre logo appears better on Realme 10 Pro+, while the Symposium boards are better on Redmi Note 12 Pro+. The overall verdict for this photo according to me will go in favour of Realme 10 Pro+. 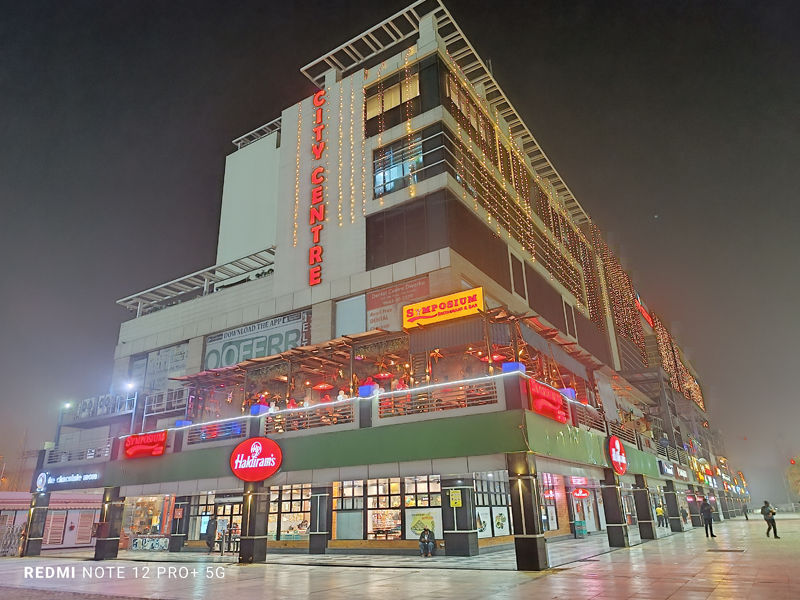 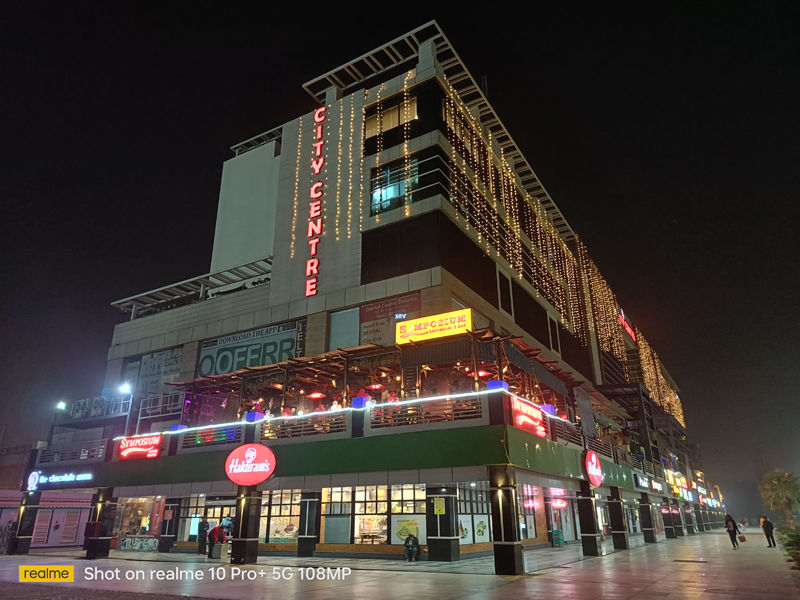 When capturing the same scenario in night mode, the result on Realme 10 Pro+ was almost the same. The night mode couldn’t create its charm. The Redmi Note 12 Pro+ on the other hand has improved, the sky was better this time and I could spot more details on this one. 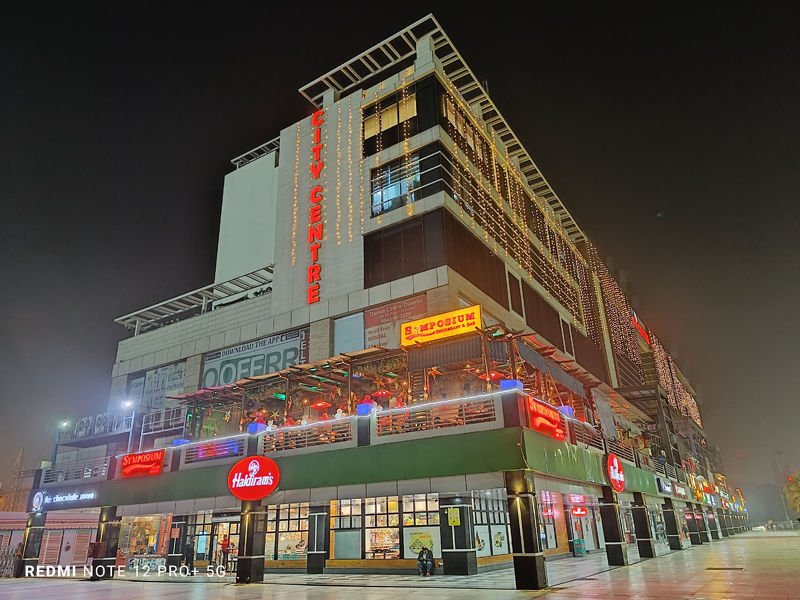 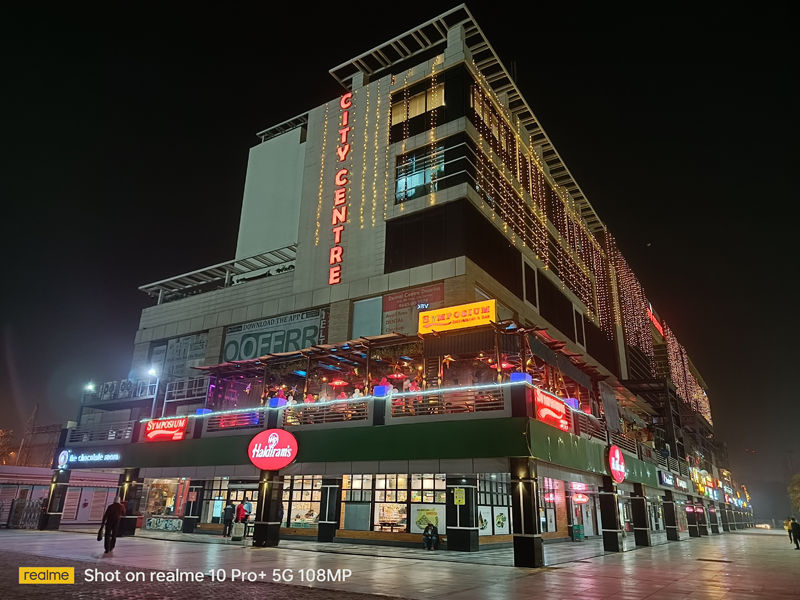 While keeping both the photos at full crop, I also observed that the detailing on Redmi’s photo is better than the Realme’s image. In fact, the sign boards in these pictures are much sharper on Redmi Note 12 Pro+. So, in my opinion, the winning title can be given to Redmi Note 12 Pro+ this time.

Now that we’ve seen the rear camera quality, its now time to figure out which phone can be the best selfie shooter. These photos were captured using portrait mode on both phones. Although there isn’t much of a difference between these pictures, Realme’s image has a blue tinge, which we noticed while testing out the back cameras. 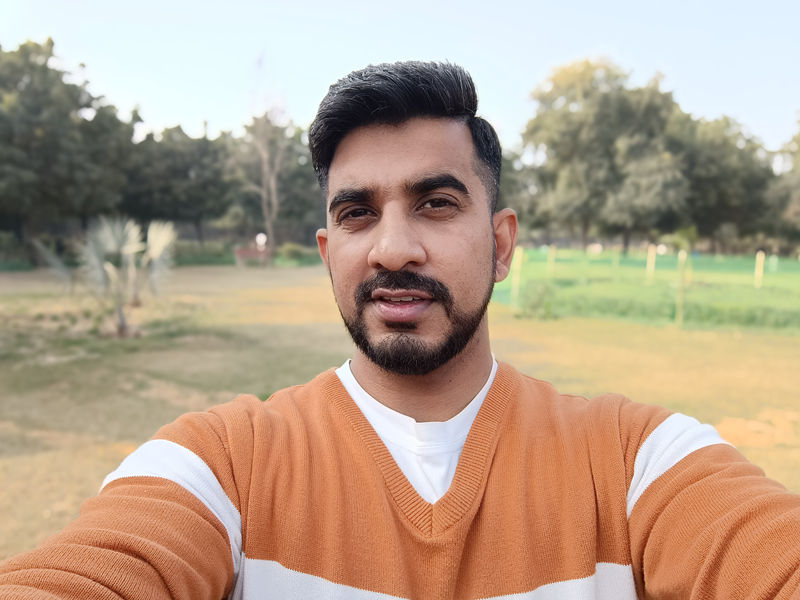 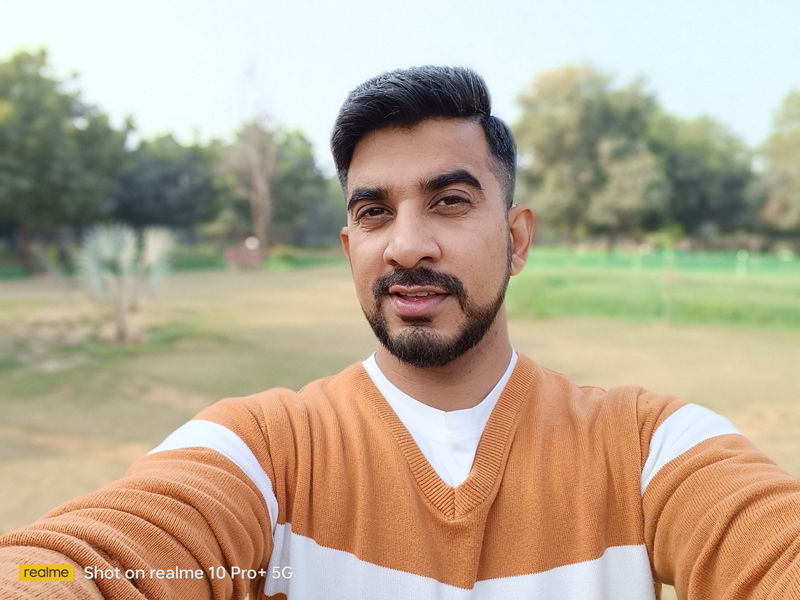 In fact, when you zoom in on these photos, you can see that Realme Note 10 Pro+ was unable to detect the edges accurately, and my right ear became partially fused with the background. And this is the reason, why Redmi can be considered the winner in this round.

On the contrary, when we see the low-light front shot, Realme 10 Pro+ seems to lead the selfie game. The image taken from Redmi Note 12 Pro+ is grainy, lacks details and the colour balance is also not too accurate. While the Realme 10 Pro+ could capture a decent snap, which is more detailed and almost has the right colour balance. No doubt, the day selfie went in favour of Redmi, the Realme benefits from the low-light front shot. 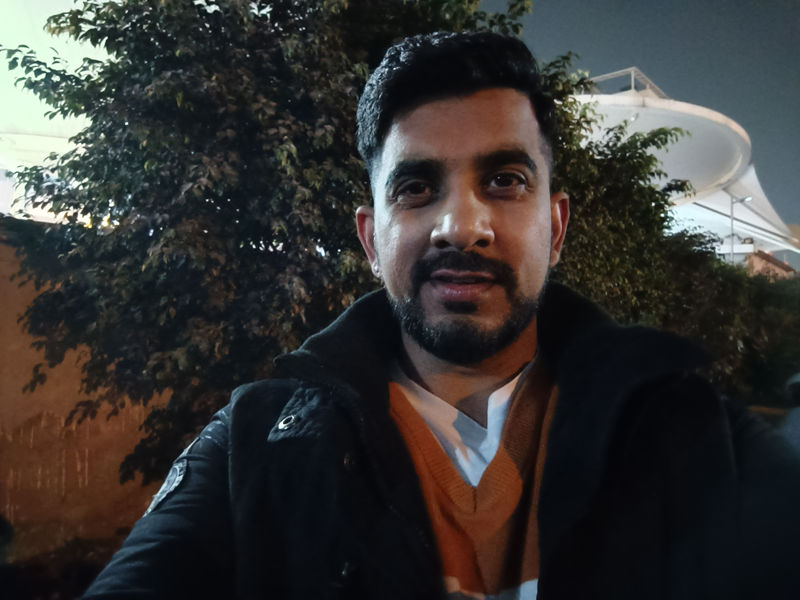 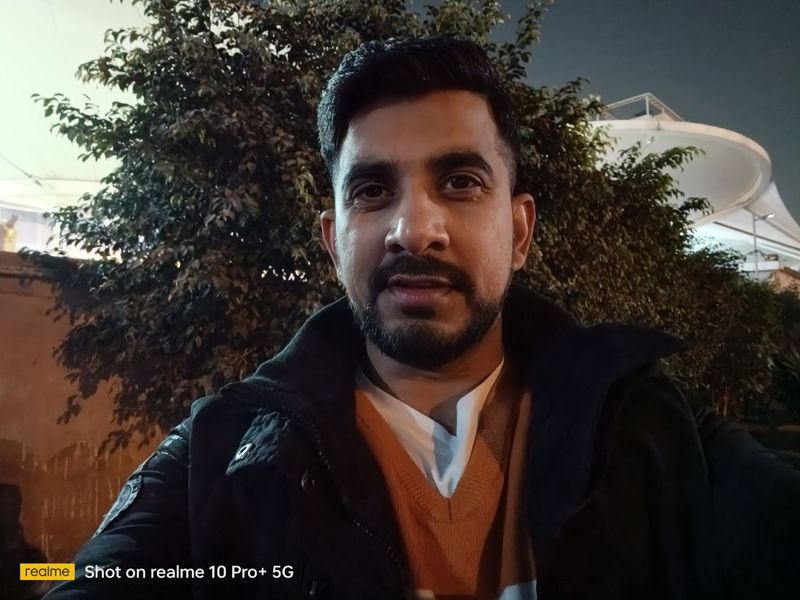 So, after reviewing all of the camera samples, we can conclude that there isn’t much of a difference between the two phones as far as the photography aspect is concerned. In some photos, Redmi leads the game and in some others, Realme comes out to be the winner. However, if I have to choose one phone out of the two, I would go for the Redmi Note 12 Pro+, as it could replicate accurate colour tones, which the Realme 10 Pro+ could not do in my photos. In several situations, the Realme phone added a blue tinge to the photos. We can say, that Redmi Note 12 Pro+ surely carries the legacy of the Note series ahead.

Redmi Note 12 Pro+ 5G vs Nothing Phone (1): loaded mid-rangers pitted against each other

Redmi Note 12 Pro Plus vs Xiaomi 11i HyperCharge: is the Redmi phone better?