91mobiles.com
Home News Redmi 7A India launch date is July 4th, will be available via... 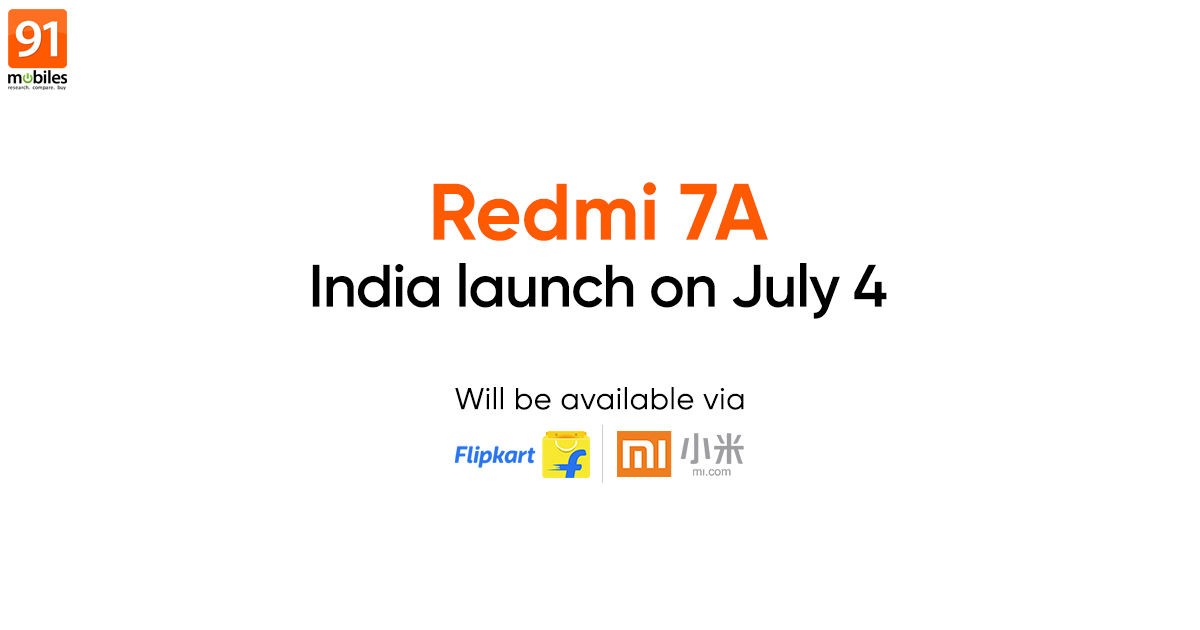 “Flipkart has set up a dedicated listing page for the Redmi 7A in India, complete with a ‘Notify Me’ button”

Following our exclusive report from last week’s and an official confirmation just days later, Xiaomi has announced the Redmi 7A India launch date on Twitter. The eagerly awaited budget smartphone will be unveiled in the country at an event on July 4th. The Redmi 7A listing has also gone live on the e-commerce platform Flipkart, with a ‘Notify Me’ button. This clearly means the smartphone will be available via the e-commerce platform in the country, along with Mi.com and Mi Home stores at the time of launch. Of course, interested buyers can sign up to get notifications to get instant notifications about the Redmi 7A India launch as well as its price via Flipkart.

Mi fans, here’s something exciting 😉. We are set to launch the #Redmi7A on 4th July.

Let’s welcome #SmartDeshKaSmartphone and get ready to see it conquer the world. Can’t wait! 😎

How long will it take for 7A to become #1? 😉Any guesses? 😍#Xiaomi #Redmi pic.twitter.com/NNg9lfppmS

The Redmi 7A is the latest budget offering from the brand. It was unveiled in China back in May and is an incremental upgrade to the Redmi 6A smartphone, with 18:9 aspect ratio display and a beefy battery cell. While the phone is expected to be the same as the Chinese variant, Xiaomi India head Manu Kumar Jain tweeted over the weekend that the Redmi 7A will be getting a ‘massive feature upgrade’ in India.

#Redmi7A: we are upgrading a MASSIVE feature for the India variant. #MadeForIndia #MakeInIndia 🇮🇳

The feature remains a mystery; however, it’s said to be something that you all loved in the Redmi Note 7 and Mi A2 smartphones and one that no other phone under Rs 20,000 from rival brands offer. Notably, the Redmi Note 7 and Mi A2 both have USB Type-C charging port in common; however, they are not the only smartphones under Rs 20,000 to offer the charging port. There are Nokia 6.1 Plus and Nokia 7.1 to name a few. The Redmi 7A in China, on the other hand, comes with a microUSB charging port to juice up its beefy 4,000mAh battery.

Apart from this, the phone also packs a 5.45-inch HD+ display with 18:9 aspect ratio. The Redmi 7A is powered by an entry-level Snapdragon 439 chipset from Qualcomm paired with up to 3GB of RAM and 16GB/ 32GB user-expandable storage.

In the camera department, there is a 5-megapixel shooter on the front, while on the rear it features a 13-megapixel f/2.2 snapper coupled with LED flash. The handset runs Android 9 Pie-based MIUI 10 out of the box. Just like its predecessor, the Redmi 7A also lacks a fingerprint scanner. On the connectivity front, there is dual 4G VoLTE, Wi-Fi 802.11 b/g/n, Bluetooth 4.2, GPS, microUSB 2.0, and a 3.5mm audio jack.