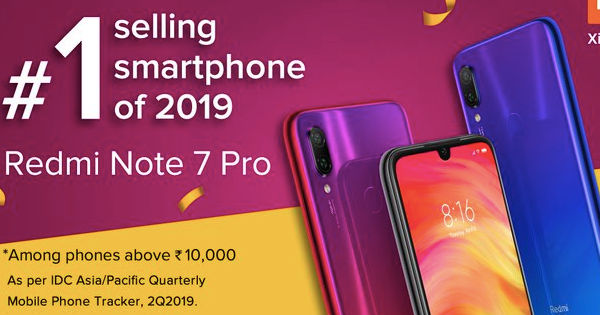 Redmi Note 7 Pro smartphone has turned out to be the best-selling smartphone in the above Rs 10,000+ category in India. According to the market intelligence firm International Data Corporation (IDC), the Redmi Note 7 Pro was the undisputed leader in the segment. The handset has achieved the feat within six months of its launch globally. Xiaomi India head Manu Kumar Jain celebrated it by tweeting, “The beast proves itself & how! India’s #48MP Camera journey kicked off with #RedmiNote7Pro.” This comes after Xiaomi recently announced it has sold over 20 million units of the Redmi Note 7 series globally and over five million units in India alone. The series comprises of three smartphones – the Redmi Note 7, Redmi Note 7S, and Redmi Note 7 Pro.

The beast proves itself & how! India’s #48MP Camera journey kicked off with #RedmiNote7Pro. 📸

Xiaomi, meanwhile, is gearing up to launch the successor of the handsets, which will be dubbed as Redmi Note 8 series, at its event in China on August 29th. The lineup will include two models Redmi Note 8 and Redmi Note 8 Pro with the quad rear camera setup. The Pro is said to feature the latest 64MP Samsung ISOCELL Bright GW1 sensor and MediaTek Helio P90GT ticking at its core. The phone is also tipped to feature dot-notch display, 4,500mAh battery with 18W fast charging, and 25x zooming capabilities. The standard Redmi Note 8, on the other hand, will reportedly house 48MP main sensor and Snapdragon 665 mobile platform.