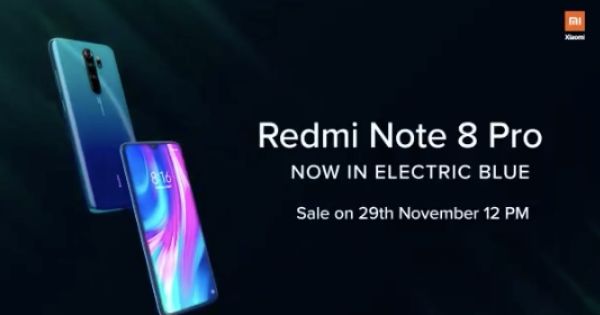 Redmi Note 8 Pro Electric Blue colour variant was launched by Xiaomi ahead of the Black Friday sale weekend. The smartphone went on sale on November 29th and it offers a new aurora gradient finish. Xiaomi held its its Black Friday sale in India, which began on  November 29th and will last till December 2nd. Xiaomi also launched the Redmi Note 8 in Cosmic Purple colour variant as well. The company is offering plenty of discounts on a bunch of its smartphones and accessories.

Redmi Note 8 Pro Electric Blue colour price in India is the same as all the other variants. The base option, which comes with 6GB RAM and 64GB storage, is available for Rs 14,999. The device can be configured with up to 8GB RAM and 128GB of onboard storage, which costs Rs 17,999.

Other Redmi Note 8 Pro specifications include a MediaTek Helio G90T chipset, which is a gaming focused chipset. There’s a 6.53-inch FHD+ display up front, with a notch at the top that houses a 20-megapixel selfie camera. Xiaomi has included a 4,500mAh battery inside, which supports 18W fast charging. The phone also features an IR blaster, a 3.5mm headphone jack, and a fingerprint scanner at the back. It runs Android 9.0 Pie based MIUI 11 out of the box.