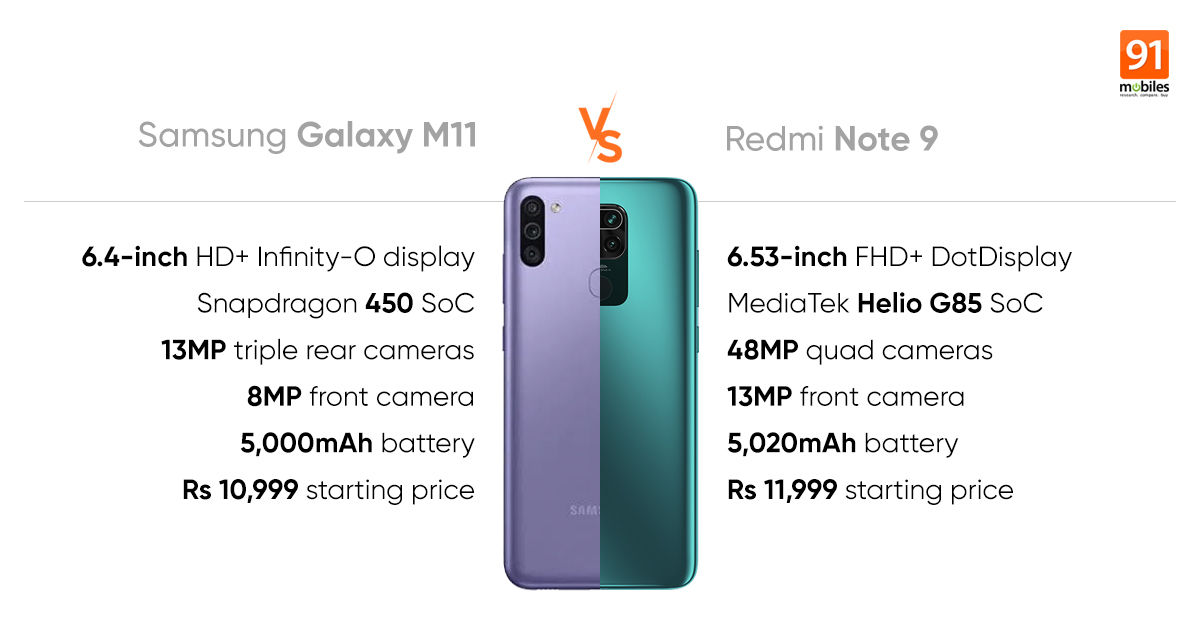 Redmi Note 9 has been launched in India with an affordable price tag that starts at Rs 11,999. The handset is a younger sibling of Redmi Note 9 Pro (review), which was launched in India earlier this year. It has the same design language, including a punch-hole display and quad cameras symmetrically-aligned in a squarish module at the back. Furthermore, the Redmi Note 9 features a beefy 5,020mAh battery cell, support for fast charging tech, 48MP primary sensor, and up to 6GB RAM + 128GB storage. Yesterday, we compared the Redmi Note 9 with Realme Narzo 10. Now, we’re pitting the device against Samsung Galaxy M11, which is also retailing in India with a similar price tag.

The Samsung Galaxy M11, on the other hand, is retailing at Rs 10,999 for the base 3GB RAM and 32GB storage variant in India. The phone’s 4GB RAM + 64GB storage option has been priced at Rs 12,999. The handset is available for sale on Samsung.com, Flipkart, Amazon India, and across offline stores in metallic blue, black and violet colours.

The Redmi Note 9 and Samsung Galaxy M11 both come with a punch-hole display, a rear-mounted fingerprint scanner, and 3.5mm headphone jack, but that’s where the similarities end. The Redmi phone touts an aura design with P2i water-repellent coating and Corning Gorilla Glass 5. Around the back, the phone features quad rear cameras in squarish module with a fingerprint scanner just below. The Samsung Galaxy M11, in contrast, features a polycarbonate body with vertically-aligned triple camera setup at the back.

Starting with Redmi Note 9 specifications, it features dual SIM support and runs MIUI 11 atop Android 10 out of the box. The handset sports a 6.53-inch Dot notch display that bears FHD+ resolution, Corning Gorilla Glass 5, and a punch-hole in the top left corner. At its helm lies MediaTek Helio G85 SoC paired with up to 6GB RAM and up to 128GB storage, which is further expandable up to 512GB using a microSD card. As for Samsung Galaxy M11, it ships with a 6.4-inch HD+ LCD Infinity-O display that bears 720 x 1,560p resolution, Snapdragon 450 SoC, and up to 4GB RAM + 64GB storage options. The handset features triple rear cameras with 13MP (f/1.8) primary sensor, a 5MP (f/2.2) ultra-wide-angle lens, and a 2MP (f/2.4) depth sensor for portrait shots. There is an 8MP snapper on the front for selfies and video chats. Software-wise, it boots Android 10-based OneUI 2.0 out of the box. A 5,000mAh battery with 15W fast charging support over a microUSB port drives the entire setup.

Going by the specifications alone, the Redmi Note 9 seems to be better value for money. The handset has the latest chipset, 48MP quad rear cameras, FHD+ screen, and a charging tech that’ll juice a 5,000mAh battery faster than Samsung Galaxy M11’s 15W charging tech. On the other hand, the Samsung phone is slightly cheaper than Redmi Note 9.

That said, we can only tell how good Redmi Note 9 is until we review it, so stay tuned for that!