Xiaomi’s standalone brand Redmi is known to be working on a Snapdragon 855-powered flagship. Given the series of hints and teasers from the brand’s president himself, the launch might be right around the corner. Now, ahead of the launch, a Chinese tipster on Weibo has shared the key specifications of the flagship, revealing that the phone will have a 6.39-inch full-HD+ display and a 32MP selfie shooter. The handset is also expected to feature a triple rear camera setup with a 48MP primary sensor. 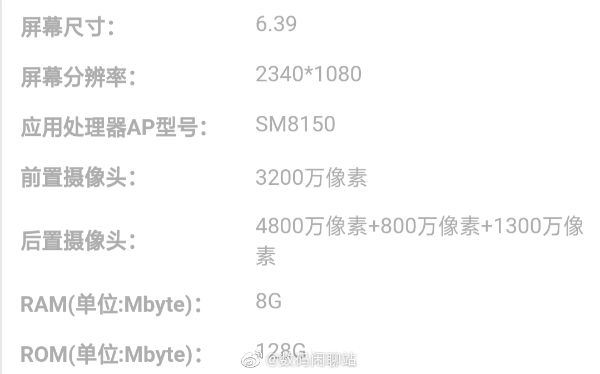 According to the tipster, the Redmi flagship is likely to pack 8GB of RAM with 128GB onboard storage. However, it is unclear if the phone would come only in one variant. The rear of the phone could be fitted with a triple camera setup consisting of a 48-megapixel primary shooter, an 8-megapixel secondary depth sensor and a third 13-megapixel ultra-wide angle lens. On the front, the phone is said to have a 32MP snapper for selfies and video calls. The upcoming Redmi flagship could feature an edge-to-edge 6.39-inch full HD+ (2,340 X 1,080p) display that might have Corning Gorilla glass protection as well. Furthermore, Redmi’s Lu Weibing himself recently confirmed the handset would have a 3.5mm audio jack and NFC support.

It is also reported to come with wireless charging, suggesting the flagship could rock a glass back panel. Details regarding the display design are pretty scarce at the moment, so it remains to be seen if the handset will embrace a notched display or feature a pop-up slider to accommodate the selfie snapper. The smartphone is likely to have a rear-mounted fingerprint sensor for biometric security. Though there is no official confirmation regarding the launch just yet, we expect the phone to go official in the coming months.