In a Weibo post last month, Lu Weibing, the vice president and head of Redmi brand, confirmed to launch a flagship smartphone powered by the Qualcomm Snapdragon 855 SoC soon. However, much to everyone’s surprise, Lu Weibing in his latest Weibo post has request users not to ask him about the flagship and it is “too early.” He quickly noted that his primary focus, for now, is selling ten million units of the recently launched Redmi 7 and Note 7 Pro smartphones in China. 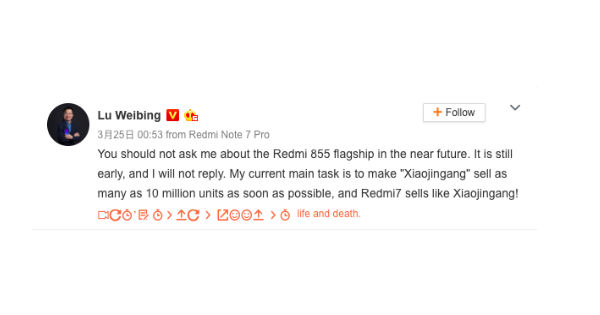 Redmi recently launched the Redmi 7 and Redmi Note 7 Pro in China. The Redmi 7 is a budget-offering that comes with a 6.26-inch display with HD+ resolution, waterdrop notch, 19:9 aspect ratio, and Corning Gorilla Glass 5. It is powered by the Qualcomm Snapdragon 632 chipset paired with up to 4GB of RAM and 64GB built-in storage that is further expandable using a microSD card. The smartphone features a dual-rear camera setup with 12-megapixel + 2-megapixel sensors with LED flash on the rear and an 8-megapixel shooter on the front.

As for the Redmi Note 7 Pro, it packs a 6.3-inch Full-HD+ Dot notch display and is powered by the Snapdragon 675 SoC. The handset packs a 48MP Sony IMX586 primary sensor paired with 5MP secondary depth sensor on the rear; the selfie camera has a 13MP sensor. It also has a 4,000mAh battery with 18W fast-charging support.