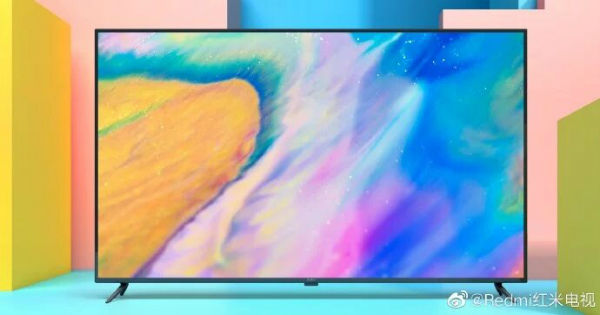 Redmi TV is confirmed to be announced on August 29th in China, and the brand has also shared that there will be a 70-inch model in the series. Now ahead of the announcement, the Xiaomi sub-brand has released an image of the Redmi TV, revealing the complete design in its full glory. The Redmi TV has very slim bezels across the display and the Redmi branding is present beneath the display. Redmi TV has model number L70M5-RA and is said to come in two sizes – 40-inch and 70-inch and both the models are likely to have 4K resolution. Redmi TV is expected to run the PatchWall software for the user interface, much like the Mi TV range.

Furthermore, the Redmi TV is also expected to feature DTS and Dolby Audio. It should also come with Bluetooth voice control remote and a pop-up camera for video chats. The TV looks very similar to most high-end Xiaomi TVs that are already available in China and India. It should come with HDR10 support as well for an immersive viewing experience. Unfortunately, nothing else is known about the TV at the moment, but with the launch just a few days away, we should learn more soon.

Separately, Redmi is also expected to announce the Redmi 8A and Redmi 8 Pro smartphones at the event. The Redmi 8 Pro is expected to come in two RAM and storage configurations: 3GB + 32GB and 4GB + 64GB. It is likely to boot Android 9.0 Pie with MIUI 10 on top. Connectivity options include Bluetooth 4.2, dual-band Wi-Fi, and USB Type-C charging port. The handset will have a centre-aligned quad-camera setup on the back. On the other hand, the Redmi 8A will ship with Snapdragon 439 SoC, pack 5,000mAh battery and 64GB storage.