A new poster of Redmi X smartphone has appeared on Weibo recently. As per a leaked poster, the Redmi X would be introduced on February 15th and will come with an in-display fingerprint scanner. However, no other information about this device has been revealed yet.  Redmi has started operating as an individual identity after being spun off from Xiaomi earlier this month. The Redmi Note 7 was the first smartphone from the newly independent -brand to be introduced. Besides this, the manufacturer also plans to launch Redmi Note 7 Pro in the coming month.

To recall, a Redmi X model with 48-megapixel rear camera was listed on Chinese e-commerce site JD.com earlier this month. While the Redmi Note 7 was launched as the first handset from the brand with the high-resolution camera, it still doesn’t count out the possibility of the upcoming Redmi X would not have the same. 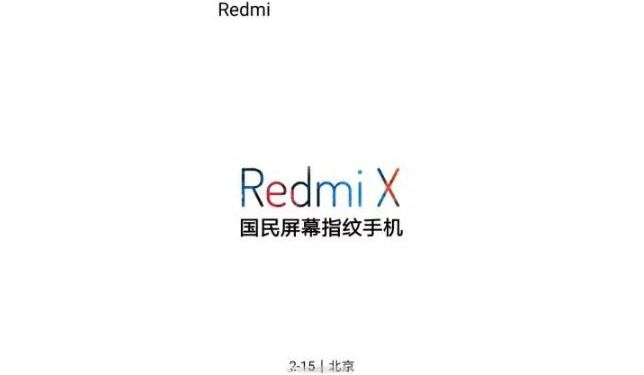 Moving back to the leaked poster, the text on the poster loosely translates to “national screen fingerprint scanner mobile phone.” However, apart from the launch date, it does not disclose any further information. But according to a previous leak, which had reported that Redmi is working on a Snapdragon 855 SoC based smartphone, it seems that the Redmi X is the perfect fit.

Still, these are just speculations and there is nothing official yet and since the teaser poster has not been released yet, it may eventually remain just a rumour. However, since February 15th is not too far away, we should get something official – perhaps a teaser or an invite – in the next week if the Redmi X launch is indeed in the pipeline.