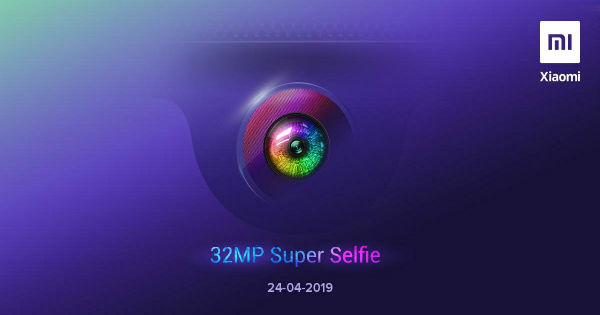 After teasing the Redmi Y3’s imminent launch last week, Xiaomi India today announced the phone would be launching in the country on April 24th. The Redmi Y series is selfie-centric budget series that debuted in India in 2017 and the Redmi Y3 will continue the series’ legacy. The smartphone has been teased to pack a 32MP shooter with enhanced AI beauty mode on the front. It is likely Xiaomi will use the Samsung GD1 sensor for photography in the Redmi Y3.

The Redmi Y3 handset recently received Wi-Fi certification, revealing it will have M1810F6G model number, runs on Android 9.0 Pie with MIUI on top and supports Wi-Fi 802.11 b/g/n. While it is not confirmed, the phone could be powered by the Snapdragon 660 SoC, paired with up to 6GB of RAM and 128GB internal storage. The handset is also expected to feature a waterdrop-style notch to accommodate the selfie shooter. Xiaomi India has also been teasing a bigger battery, hinting at a possible 4,000mAh unit on board. Unfortunately, that’s all we know about the phone at the moment, but We’ll be there at the launch bringing you all the updates on the Redmi Y3 price, specifications, and availability, so keep watching the space.

Separately, Xiaomi is also expected to launch the Redmi 7 smartphone in India soon, though we don’t have a date just yet. The latest budget-smartphone packs a 6.26-inch display with HD+ resolution and waterdrop notch and is powered by the Qualcomm Snapdragon 632 chipset paired with up to 4GB of RAM and 64GB built-in storage.