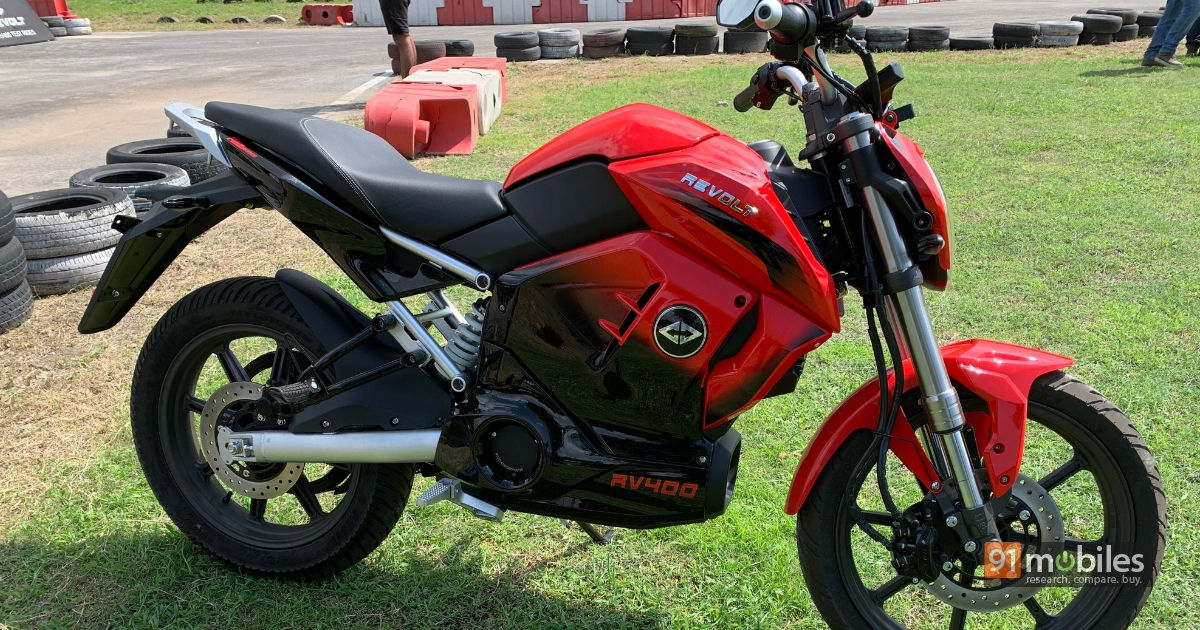 Meet the Revolt RV400, India’s very first commercially available electric motorbike. The bike has officially been launched in India today by Revolt Motors, a venture started by Rahul Sharma, co-founder of Micromax. Apart from all the tech that comes packed in, Revolt has also announced a very interesting purchase plan for those looking to own one. Instead of an ex-showroom price, Revolt has introduced a monthly payment model that’ll involve paying an amount of Rs 3,999 per month (Rs 3,499 per month for the base model) for a period of 37 months. Aspects like insurance, registration etc are all included, and the company is promising free service for three years. There’s unlimited warranty on the battery (which is the most important component of an electric vehicle), and a warranty of five years on the bike itself. 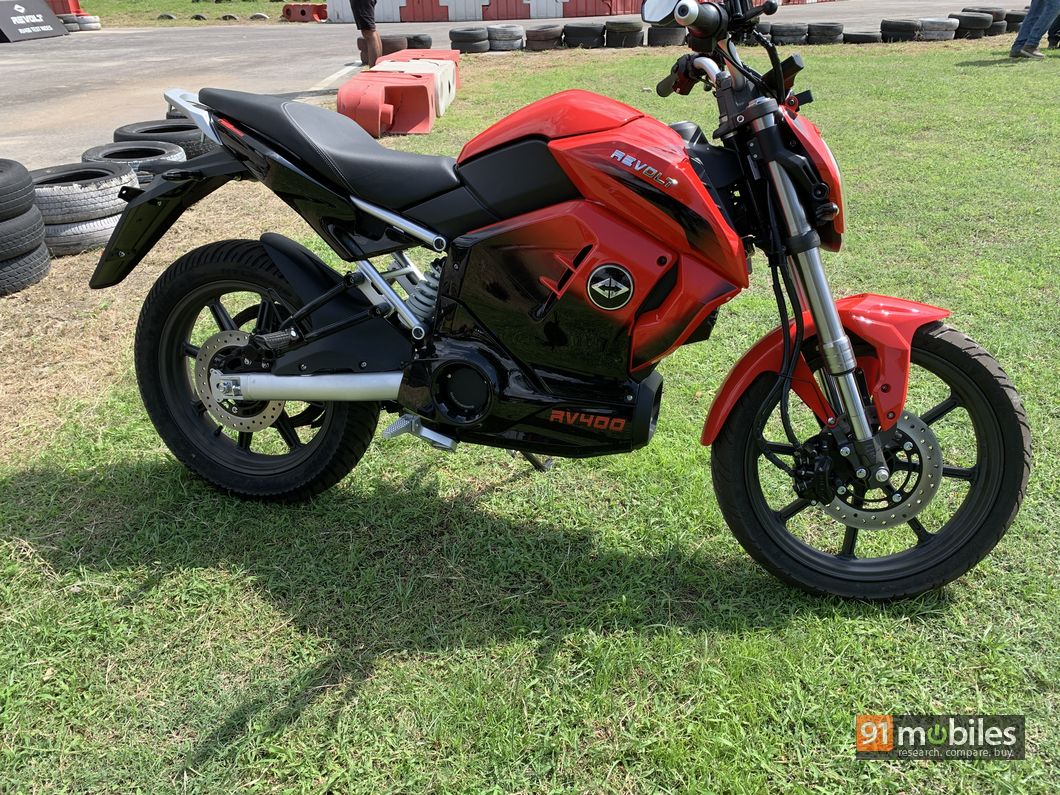 In terms of design, the RV400 cuts a handsome package, resembling a sports commuter bike. Colour choices include a staid black as well as a more flamboyant red black combo, with the trapezoidal LED headlight being one of the key highlights. There’s no exhaust of course, and if you look closely, you’ll notice that there are no levers on the side for switching gears or braking. The star of the show is hidden inside the area which normally constitutes the fuel tank of a conventional bike. The 72V, 3.24 KWh lithium ion battery is removable, so you can either charge it by connecting the charger to the bike directly and hooking it up to a regular 15-amp power socket, or pulling out the 18kg pack from the ‘tank’ and carrying it inside your house or office to juice up. The battery can be charged up to 75 percent levels in about 3 hours, while a full charge will supposedly take about 4.5 hours. Also, with an ARAI-certified range of 156 kms per charge, the Revolt RV400 certainly seems quite compelling. The top speed of the bike is 85kmph, which means that while it may not be a rocket, it’s certainly enough for jaunts across the city. 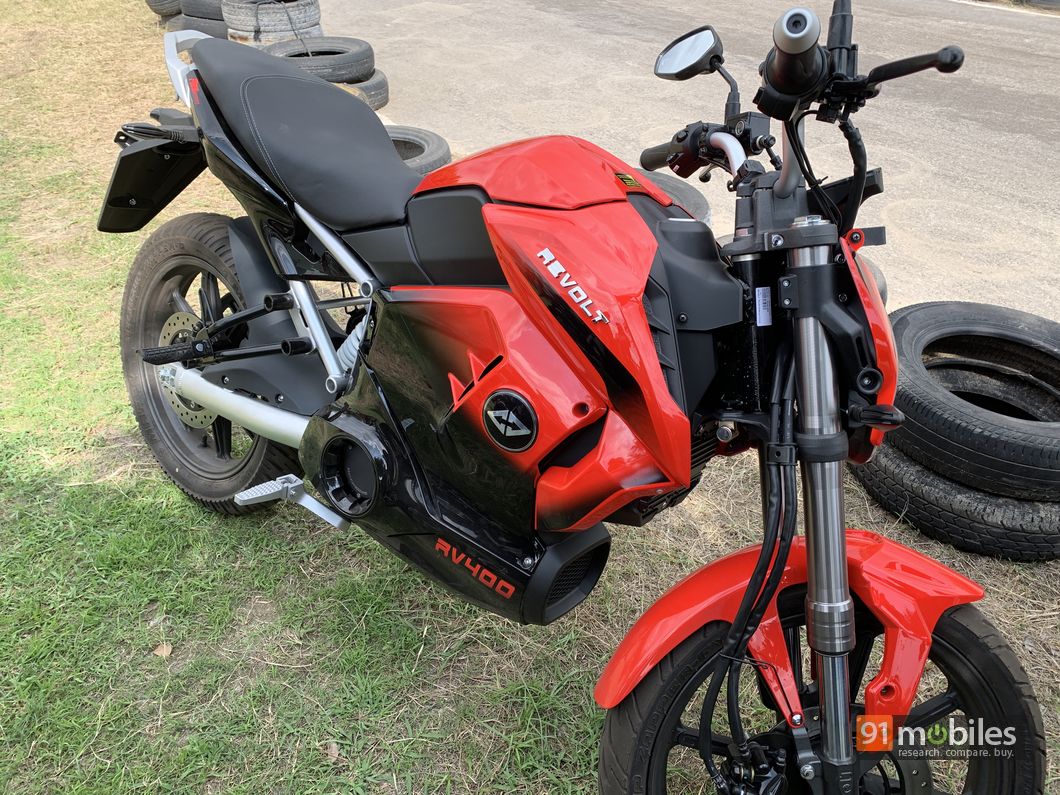 Riding the RV400 is a fun experience. For powering it up, you can use the large power button on the bike, or press the button on the bundled smart key. Revolt is even throwing in a smart helmet which lets you use voice to start the bike up. You also have the option of using a companion app on your smartphone. Among other things, the app can also be used to check battery level and set up a geofence for when you need to lend your bike to a friend. Since this is an electric bike, there’s no sound, but interestingly, the app can also be used to choose one of four built in sounds that make the built-in soundbox go vroom, giving you the feel of a conventional bike. Revolt says that users can also be used to download more sounds at a later stage. Also worth noting is the fact that the bike can’t be started before closing the side stand. 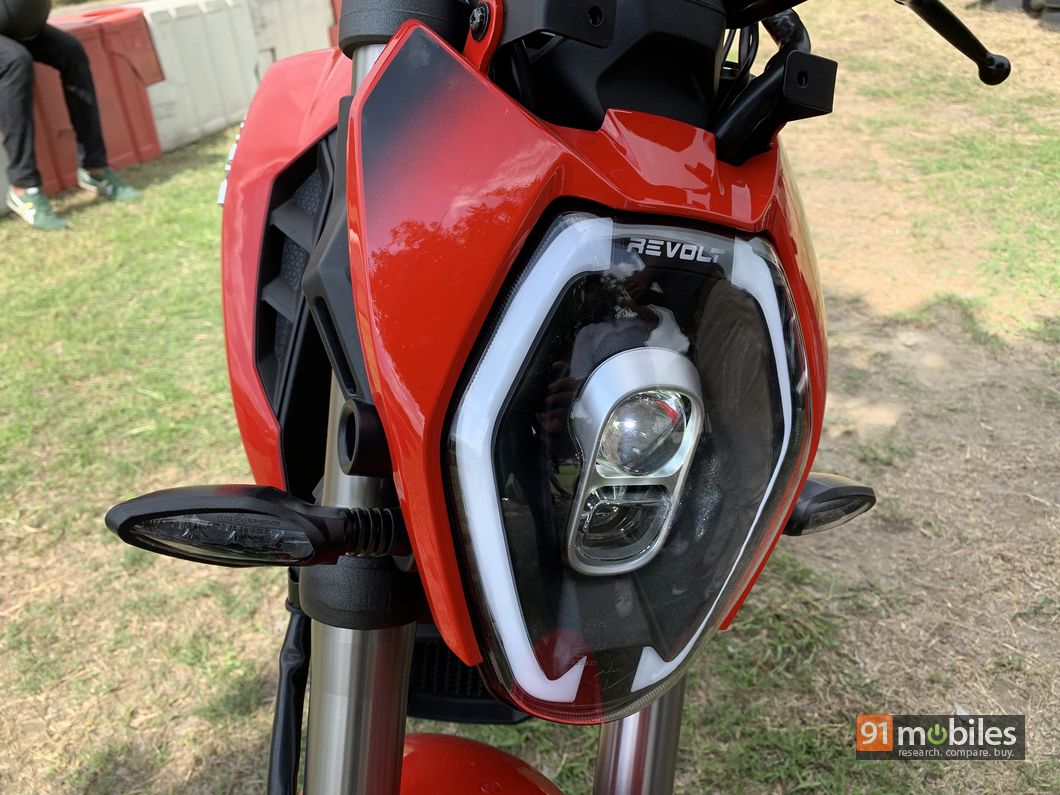 Once you’re on the saddle and the bike is powered on, all you need to do is twist the throttle and away you go. On the right handlebar is a mode button, which can be used to switch between eco, normal and sports modes. The acceleration varies, and the top speed for each mode is different as well. The eco mode, which is more appropriate for riding in heavy traffic, has a top speed of 45kmph, the regular mode can take the bike up to 65kmph, while the sports mode, ideal for open roads, can go up to 85kmph. The gearless bike is easy to ride and handles well too. There are no levers to control or brae to hit using your feet… just use the throttle and the two brakes on the handlebars to control – just like you’d ride a gearless scooter. The combined braking system (CBS) seems reliable, and the 17-inch alloy wheels shod with a 120/80 tyre (rear) ensure good ride quality. The only possible issue could be getting used to the jerk when one twists the throttle, though admittedly, one way to minimise that is to ensure you use the eco mode when you start riding and switch as and when required.

With the launch of the Revolt RV400, the company has outed not only a very compelling motorbike, it’s also trying to change the way two-wheelers are bought and ridden. The biggest problem for electric vehicles in India is the lack of charging infrastructure, and Revolt is trying to tackle that by making the battery removable (so it can be charged anywhere), and by offering swap stations in the city where one can go and exchange their depleted bike battery for a full-charged on. The purchase plans that involve fixed monthly payments are pretty unique too. India’s EV revolution might still be some time away, but as far as we’re concerned, the Revolt RV400 shows how smart tech, with smartphones acting as the hub, can play a pivotal role in improving our lives going forward. With the ultimate goal of reducing air pollution, and making biking more affordable for everyone, Revolt certainly has a long road (pun unintended) ahead of it, but it’s a good, solid start.

[Exclusive] 2 Ola electric cars to launch in 2023, affordable electric scooter in the pipeline

Electric cars in India will cost the same as petrol vehicles within a year: Transport Minister Nitin Gadkari