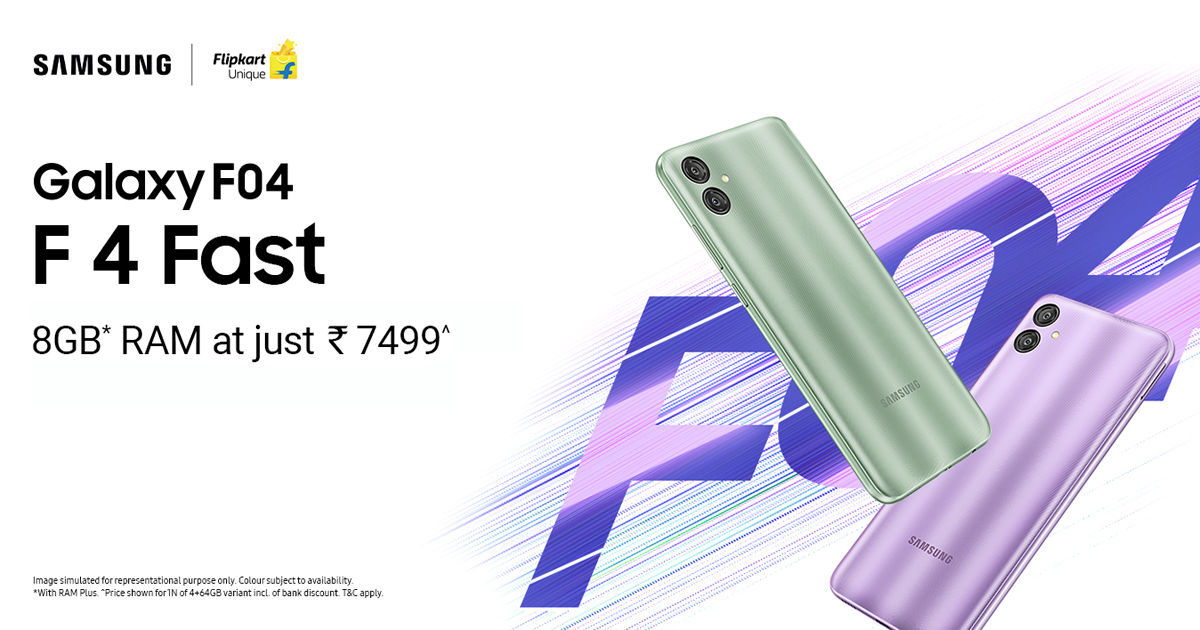 The arrival of the Samsung Galaxy F04 has caused quite a disruption in the budget price segment. More than anything, the fabulous new handset has captured the hearts of youngsters who are constantly demanding a combination of good looks and great speed and functionality from their phones. At just Rs 7,499, the new Galaxy F04 is able to deliver a thumping set of specs and a stylish body that’s mesmerising to look at. And there’s plenty more to this handset that makes it an irresistible offering. Let’s take a deep dive into everything that it brings to the table.

The ace up the sleeve of the Galaxy F04 is Samsung’s RAM Plus technology, which allows it to deliver up to 8GB of RAM. Internally, the phone carries 4GB of RAM and at any point, you can choose to convert extra storage into additional RAM with the RAM Plus feature, which can give you access to 8GB worth of total memory. This intelligent memory expansion by RAM Plus does wonders for the phone’s overall performance. It allows the device to keep more apps open in the background and even facilitates faster app launches and switching.

Youngsters use a wide variety of social media apps and at any given point, a number of these apps are open in the background. In such cases, the RAM Plus technology on Galaxy F04 makes the multitasking experience smoother than ever. It certainly makes navigation through your phone feel incredibly fast and smooth during your daily usage. To activate the RAM Plus feature, all you need to do is go to Settings > Battery and device care > Memory, and choose the amount of storage you wish to convert to additional RAM.

There’s one more thing contributing to the fabulous performance of the new Samsung Galaxy F04 – the MediaTek Helio P35 chipset. Its 12nm processor bears an octa-core setup boasting a clock speed of 2.35GHz. There’s absolutely no questioning the fact that the Galaxy F04 offers incredible day-to-day performance, thanks to its high-end hardware. 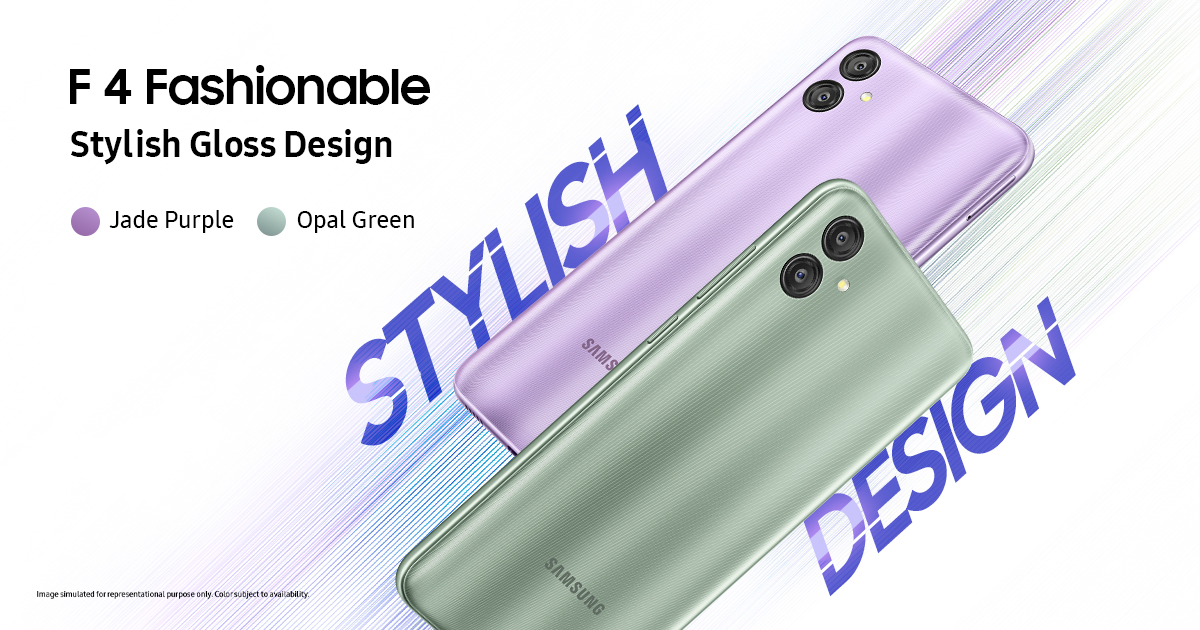 The Galaxy F04 is the kind of phone that guarantees a second look. Its trendy shades of Opal Green and Jade Purple exude a rich appeal that’s accentuated by the minimalism on its rear surface. But it’s the phone’s glossy texture that makes a big visual impact and promises to make it an object of envy for those around you. Through its spectacular design, Samsung has made sure that the phone feels premium.

And this is also visible on the front surface, which is almost entirely occupied by the display. Barring the beautifully shaped waterdrop notch and a minimal chin, the phone doesn’t have much of this surface occupied by bezels. This enhances the phone’s looks, leaving you more engrossed in whatever you view on it. 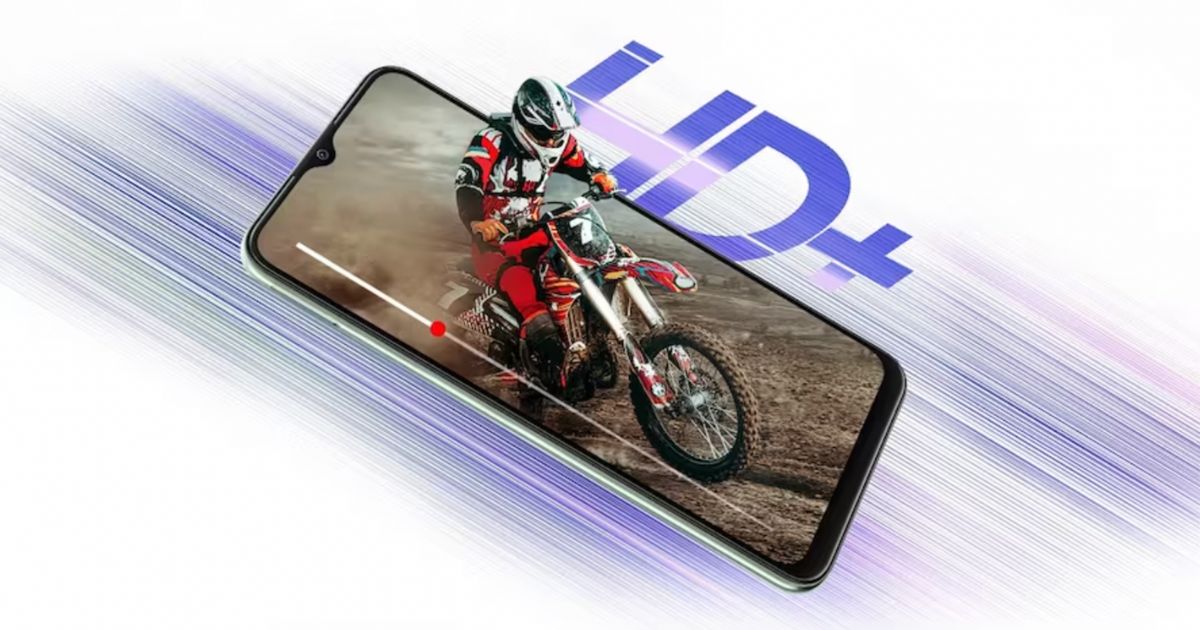 A 6.5-inch (16.55cm) display sits pretty on the front of the Samsung Galaxy F04. That’s ample screen estate for you to exploit for any kind of task you’re performing on the device. And despite this large screen, the phone’s overall size is quite compact thanks to its minimal bezels. The display showcases its visuals in an HD+ resolution of 720 x 1600 pixels. That’s more than enough to beautifully render the visuals in your favourite games or let you stream movies and TV shows in all their glory. Along with its performance and looks, this display is also a huge asset for the new Samsung device.

There’s plenty more to the Galaxy F04. You’d be pleased to know that it carries a 5000mAh battery inside it. Such massive battery capacity means you will seldom find yourself looking for a charger in the middle of the day. Furthermore, Samsung has also promised 2 times OS upgrades for this phone, which is quite a big surprise, considering that most phones in its price category don’t even offer one OS upgrade. As for the camera setup of this phone, it packs a 13MP + 2MP setup on its rear and a 5MP camera on its front. As the phone comes with a capable front camera, you can be sure that your friends will soon start turning to you each time for group selfies. Also, be prepared to look the best in every video call you attend as the front camera offers amazing quality.

Everything about the Samsung Galaxy F04 shouts impressive. The specs and features offered by this phone will make you think that it certainly belongs in a high price range. However, the Rs 7,499 price makes it a marvel in the budget space. The phone is already available for purchase through Flipkart, as well as the brand’s official website. So what are you waiting for? Just head to these pages and make sure you get your hands on this amazing smartphone as soon as possible!