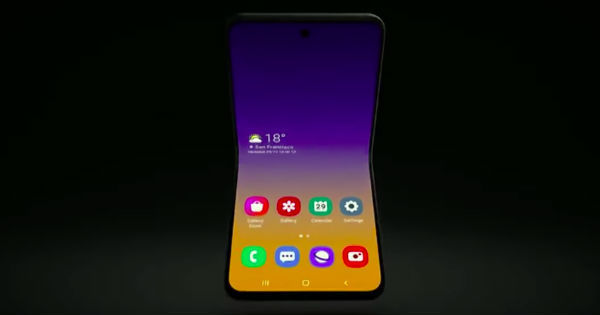 “The price of the foldable flip phone is said to be around $845 (around Rs 60,500), which would make it more affordable than the Galaxy Fold“

Samsung has already confirmed that it is working on a new foldable flip phone, something similar to the recently launched Moto Razr 2019. The company teased the design at the ‘Samsung’s Developers Conference’ recently. Now, according to The Korea Herald, the price of the foldable flip phone is said to be around $845 (around Rs 60,500), which would make it more affordable than the Galaxy Fold. An affordable foldable phone should help drive up sales and appeal to the mass market. The foldable flip phone, possibly called Galaxy Fold 2, is expected to launch in February 2020, presumably ahead of the Mobile World Congress show.

Samsung is also planning on releasing the Galaxy Fold in more markets, including New Zealand, Brazil, Italy, Vietnam, the Netherlands, Greece and Chile. A potential follow-up to the Galaxy Fold is expected in Q3 2020. Samsung hopes that it might ship around six million foldable devices next year and 20 million by 2021. If Samsung indeed launches the clamshell foldable phone under $900, it has every chance to undercut the Motorola Razr, which has a similar design and costs $1,500 (around Rs 1,07,400).

The South Korean giant is said to have sold over 500,000 Galaxy Fold units since its launch in September after a delay of about five months owing to design changes. To jog your memory, the Samsung Galaxy Fold sports a 7.3-inch QXGA+ dynamic AMOLED main display with 4.2:3 aspect ratio and a 4.6-inch HD+ Super AMOLED cover display. It is powered by a Snapdragon 855 SoC coupled with Adreno 640 GPU for graphics, 12GB RAM, and 512GB storage. The handset runs on Android 9.0 Pie with custom One UI skin. The Samsung Galaxy Fold features a 12MP dual-pixel primary rear camera with LED flash, a 12MP telephoto lens, a 16MP ultra-wide-angle sensor. On the front, it has a 10MP main shooter and an 8MP secondary snapper. There’s also an additional 10MP cover camera.