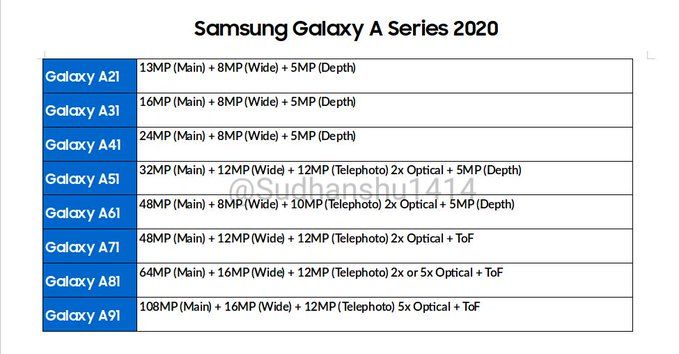 “The lineup is said to include as many as eight smartphones, with Galaxy A91 featuring a whopping 108MP camera lens”

Samsung Galaxy A series is likely to see big camera improvements next year. The South Korean phonemaker is allegedly prepping to launch as many as eight Galaxy A series smartphones with at least three cameras and in some cases four. This series is tipped to include Galaxy A91 handset that will reportedly bear Samsung’s latest ISOCELL Bright HMX sensor with a whopping 108MP resolution that promises 27MP images. In addition to this, the vendor could also introduce smartphones with up to 64MP camera primary lens, up to 2x optical zoom, wide-angle lens, depth-sensing snapper, and a 3D ToF (Time-of-Flight) lens.

Here are some key camera specs of Samsung Galaxy A series of 2020. pic.twitter.com/c7YifHcNUX

Lastly, the mid-range Galaxy A51 will allegedly sport quad-camera module at the back. The setup will include 32-megapixel main sensor + 12-megapixel wide-angle lens + 12-megapixel telephoto 2x optical zoom lens + 5-megapixel depth sensor. The internals and other specifications such as display, design, fingerprint scanner of all of the upcoming Galaxy A-series smartphones remain unknown at the moment.