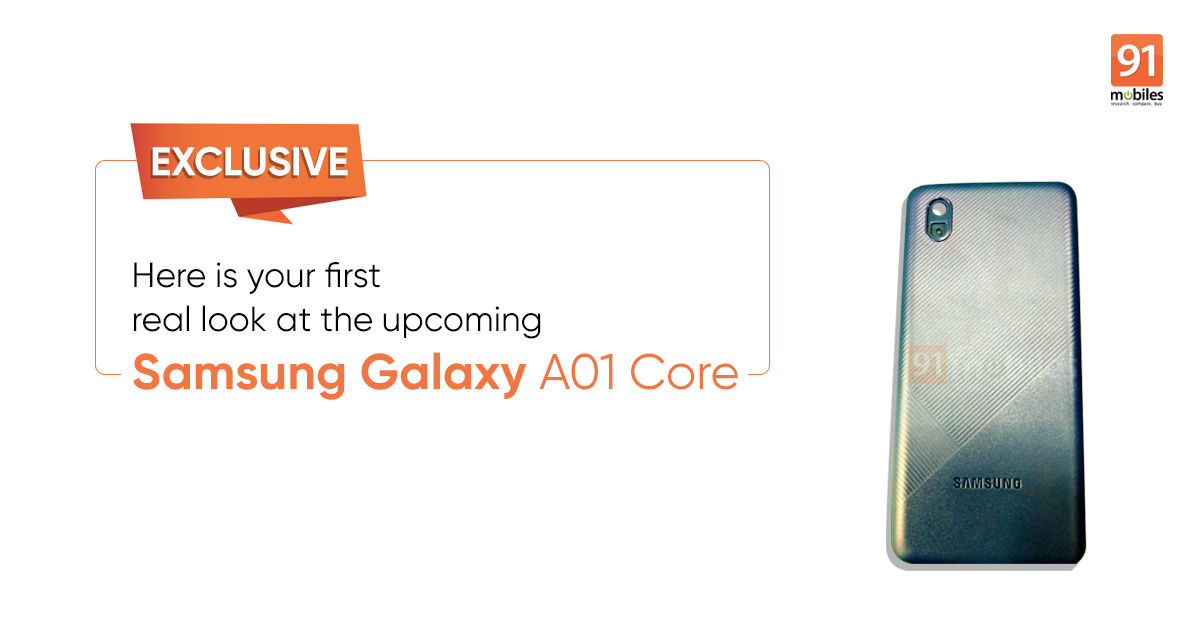 Samsung Galaxy A01 Core is expected to be the next Android Go smartphone from the company and we believe it will launch soon enough. The smartphone appeared on the Google Play Console listing last week where some key specifications were revealed. Now, 91mobiles has managed to get some live images of the Samsung Galaxy A01 Core from distributor channels, which reveal the design of the entry-level smartphone, at least from the back and sides. The Samsung Galaxy A01 Core panel images reveal that there will be a single rear camera with an LED flash at the back, which is not surprising for an entry-level smartphone. We also see a pattern of crossed lines across the back. The bottom of the plastic frame shows us a microUSB port, 3.5mm headphone jack and a single speaker grille. The right side of the frame will have the power button and volume controls. The images don’t tell us what the front of the Galaxy A01 Core will look like, but we expect to see a waterdrop notch.
As mentioned earlier, some key Samsung Galaxy A01 Core specifications were spotted on the Google Play Console listing a few days ago. It told us that the smartphone will come with an HD+ display and will be powered by the entry-level MT6739WW chipset coupled with PowerVR GE 8100 GPU paired with 1GB RAM. This is expected to be an Android Go device, which means expect to see trimmed down Google Go apps and Samsung apps pre-loaded.
There is no word yet on the Samsung Galaxy A01 Core launch date, but we expect the company to make the announcement either later this month or in August since the phone is already in the production stage.
ShareTweetShare
Share
Follow Us