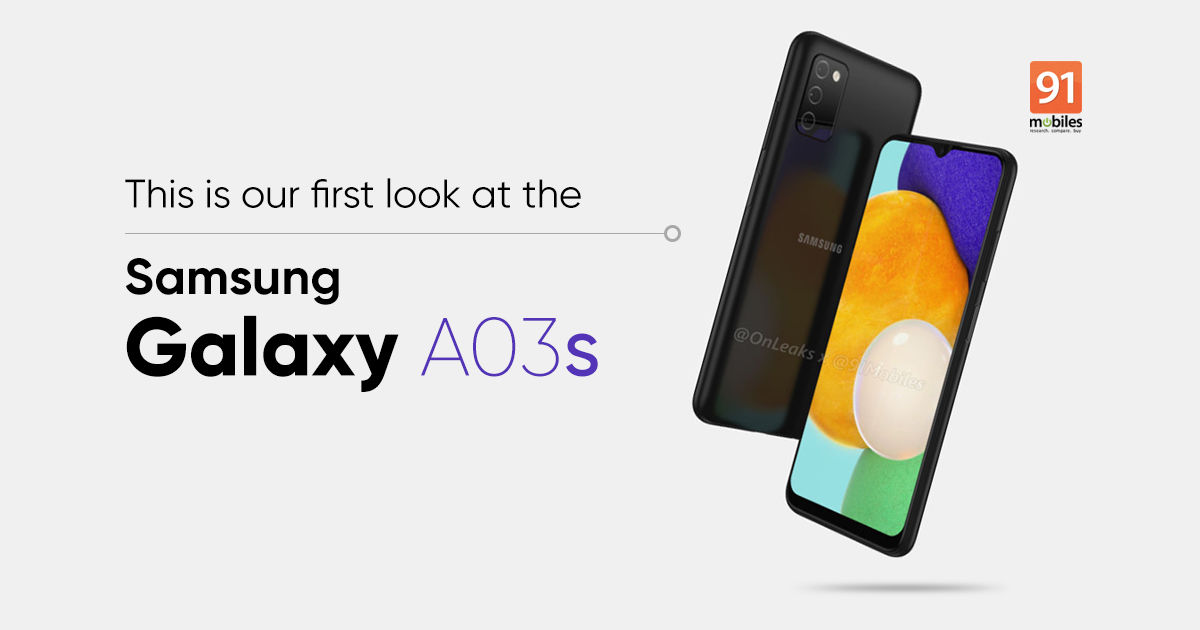 Last November, Samsung unveiled the Galaxy A02s. It is one of the most affordable Galaxy A-series smartphones and it launched in India as the Galaxy M02s. Well, we can now confirm that Samsung is working on the successor to the Galaxy A02s, and as you might have guessed, this upcoming phone will be called the Samsung Galaxy A03s. There haven’t been any leaks of the Galaxy A03s in the past. Today, however, 91Mobiles brings you exclusive Galaxy A03s renders in collaboration with the reliable tipster @OnLeaks. Moreover, we also have information on the Galaxy A03s specifications, leaving very little to the imagination.

As for the Galaxy A03s specifications, Steve Hemmerstoffer has shared with us that the phone will come with a 6.5-inch display that has a V-shaped notch for the front-facing camera. Speaking of which, you get a 5MP camera for selfies. At the rear, there is a triple camera setup with a 13MP primary sensor along with two 2MP cameras. As you can see in the renders, the Galaxy A03s will also come with a 3.5mm audio jack.

Going by the design and the specifications, it looks like the Galaxy A03s will be very similar to the Galaxy A02s. The only significant change will be the inclusion of a fingerprint scanner and a USB Type-C port. All we need to know now is the processor model and the battery capacity of the smartphone. Hopefully, we will get to know those details as the phone makes it to benchmarking platforms. Currently, there is no information regarding the Galaxy A03s launch date and price.

While we wait for the Samsung Galaxy A03s, you can check out more news about the other upcoming smartphones as well as popular product recommendations on our Facebook, Twitter, and Instagram pages and head to our YouTube channel for the latest videos.