“The Samsung Galaxy A10 is expected to be a budget smartphone, but may get premium features such as an in-display fingerprint scanner”

A new Geekbench entry has purportedly revealed details about the upcoming Samsung Galaxy A10 smartphone. The Galaxy A10 is expected to be a budget smartphone from Samsung, with recent reports suggesting that it may be launched soon, alongside the rumoured Galaxy A60. The Geekbench entry throws light upon how the entry-level may be shaping up and shows that the it may be powered by the Exynos 7885 SoC, backed by a measly 2GB of RAM and Android 9.0 Pie onboard.

While the specifications are nothing to write home about, and may even seem downright underwhelming, Samsung may be taking an interesting approach with its upcoming budget smartphones. Recent reports have suggested that even though the upcoming budget smartphones from Samsung may have seemingly ordinary specifications, the Korean electronics giant would be looking at equipping them with the latest smartphone technologies in a bid to attract buyers to itself. 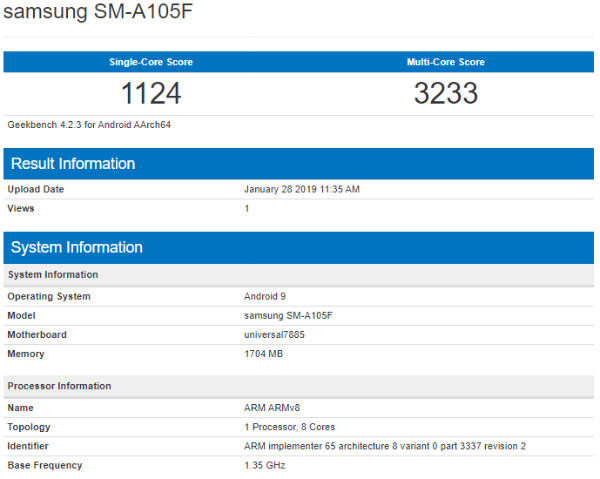 For instance, the likes of the Galaxy A10 and Galaxy A60 are rumoured to feature elements such as in-display fingerprint sensor and a multi-camera setup on the back, and is almost certain to include a wide screen display as well. This may lead to many buyers opting for these smartphones, in a bid to experience flagship features at budget pricing. The Exynos 7885 SoC is also a reliable choice by Samsung, and is slowly shaping up as the company’s go-to processor for entry segment devices.