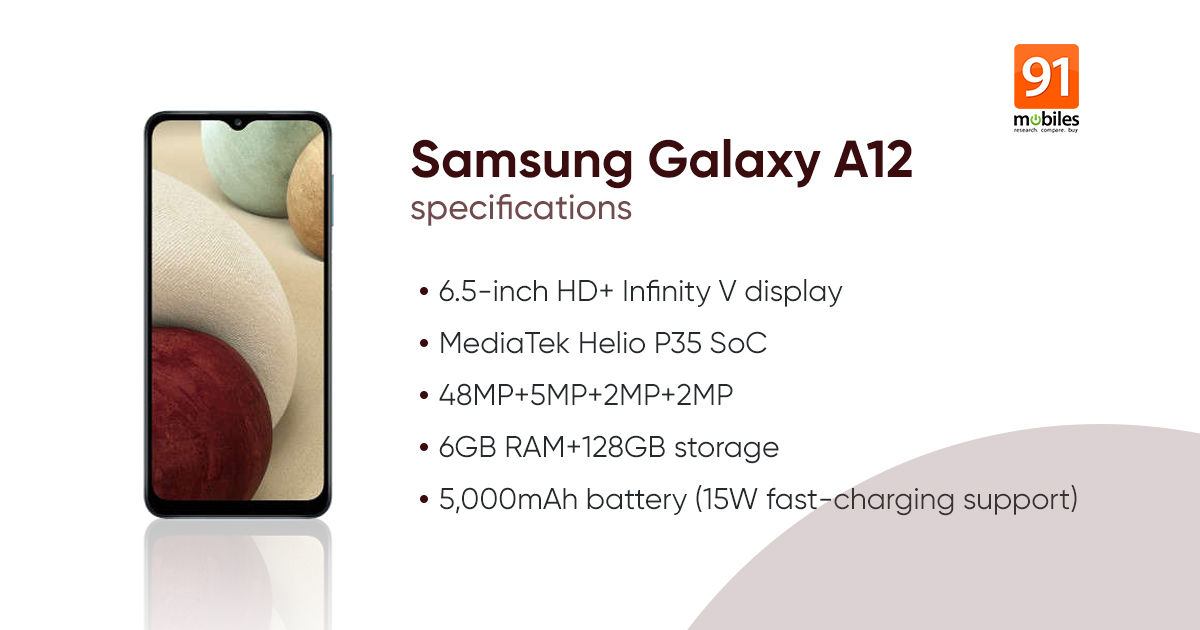 Samsung Galaxy A12 may launch in India soon according to a tweet by tipster Mukul Sharma. While Sharma hasn’t explicitly mentioned the name of the phone, the 12-second timer on the video and the mention of 48MP quad cameras suggest it is indeed the Samsung Galaxy A12 that is coming. Additionally, the Samsung Galaxy A12 price in India is said to be under Rs 15,000. To recall, the handset originally launched back in November alongside the Galaxy A02s. Key Galaxy A12 specs include a 6.5-inch HD+ TFT display, MediaTek Helio P35, quad-cameras, Android 10 OS, among others.

[Exclusive] Samsung is soon going to launch a new #GalaxyA smartphone in India. The device will feature a True 48MP Quad Camera and will be priced under 15K. Which device could it be? Hint is in the video 😉 Comment below with your guesses. @samsungindia #AwesomeIsForEveryone pic.twitter.com/H6nZrXOEWt

Samsung Galaxy A12 sports a 6.5-inch HD+ Infinity V display with a waterdrop notch for the selfie camera and a standard 60Hz refresh rate. It is powered by the MediaTek Helio P35 SoC paired with PowerVR GE8320 GPU, up to 6GB RAM, and 128GB storage that is further expandable via a microSD card. The phone boots Android 10-based OneUI custom skin on top. There is a side-mounted fingerprint sensor for security and a 5,000mAh battery with 15W fast-charging support.

Connectivity features include Wi-Fi, Bluetooth 5.0, GPS, and USB Type-C port for charging and data sync. As for the cameras, the Samsung Galaxy A12 has quad cameras at the back with a 48MP primary sensor, a 5MP ultra-wide-angle lens, a 2MP depth sensor for portrait shots, and a 2MP macro unit for close up shots. On the front, it has an 8MP snapper for selfies and video chats.