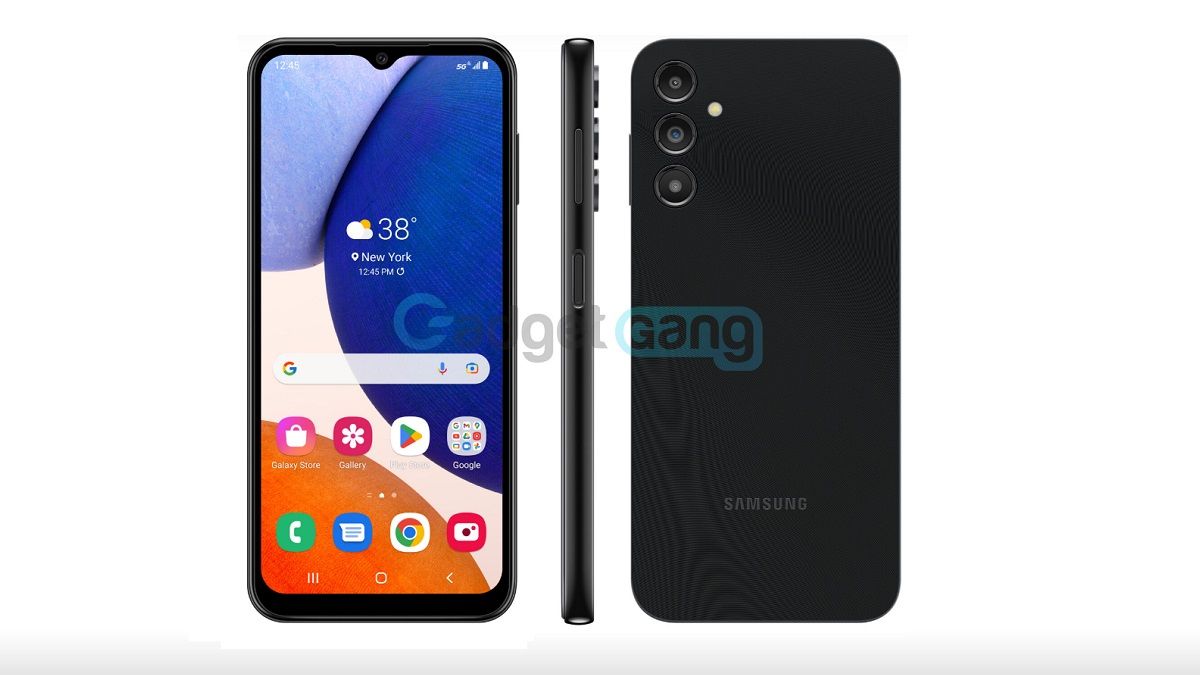 South Korean tech giant Samsung is planning to unveil a new Galaxy A-series smartphone – Galaxy A14 5G – in the coming months. The device has been previously spotted on several certification and benchmark websites, including Bluetooth SIG and WiFi Alliance. And now, well-known tipster Evan Blass has provided design renderings of the upcoming smartphone in association with GadgetGang.

The Samsung Galaxy A14 5G will be the successor to the company’s Galaxy A13 5G smartphone. It will most likely feature a full HD+ display, and an unannounced Exynos chipset and will come in a black colour option.

Looking at the render (seen above), it can be said that the upcoming A-series smartphone will have a display panel with a large chin and a waterdrop notch. The rear panel of the Samsung Galaxy A14 5G will house a triple camera setup along with an LED flash. The volume rockers and the power key, which will also feature an integrated fingerprint scanner, are placed on the right edge of the smartphone.

The smartphone is likely to feature a 6.8-inch full HD+ display, and according to the leaked render, it would include a triple-rear camera setup with a 50MP main camera and a 13MP selfie camera. The Samsung Galaxy A14 5G is expected to house a massive 5,000mAh battery and an unannounced Exynos chipset.

The upcoming Samsung Galaxy A14 5G was recently spotted on the Geekbench website with model number SM-A146P. The smartphone achieved 552 and 1,710 points on the single-core and multi-core tests on Geekbench, respectively.

The listing also revealed that the smartphone would come with 4GB of RAM and run on Android 13-based OS out of the box.

The upcoming Samsung Galaxy A14 5G is said to be an entry-level smartphone, but the company has not yet disclosed its price. The Galaxy A13 5G never made it to India (we got the 4G version instead), so it is unclear at the moment if the Galaxy A14 5G will release in the country. That said, 5G services have started rolling out in India, and Samsung would no doubt be looking to offer affordable 5G handsets in the country to take on the likes of Realme, Xiaomi, and others.