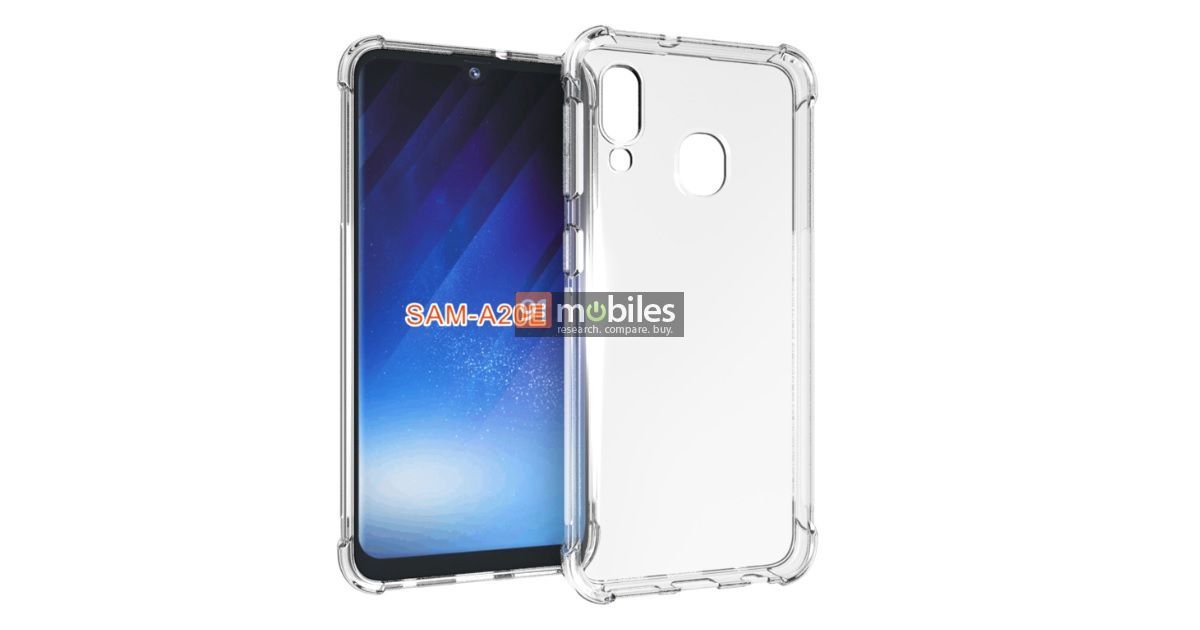 Samsung recently scheduled an event for April 10th, where the brand is expected to introduce new smartphones in the Galaxy A series. These handsets could include the Galaxy A20e, Galaxy A40, Galaxy A60, and the Galaxy A90. Among these models, the Galaxy A20e is rumoured to be the most affordable offering. Ahead of the unveiling, the handset has received a few certifications from agencies like Wi-Fi and Bluetooth SIG. Now, we bring you the very first look at the design of the upcoming budget Galaxy A series offering. 91mobiles has obtained case renders of the Samsung Galaxy A20e from a reliable source. The leak shows that the Galaxy A20e will be offering an edge-to-edge display design with a waterdrop notch above, which will be home to the front camera. The smartphone seems to have a unibody design with rounded corners and a rear-mounted fingerprint sensor. The phone appears to be made out of plastic, but we can’t confirm it at the moment.

Moving on to the other details, the case renders show that the Galaxy A20e will feature vertically-placed dual cameras at the rear with an LED flash. The phone’s volume rocker, as well as the power button, are located on the left side, while the right side seems to be completely devoid of buttons. The headphone socket seems to be placed at the bottom, alongside the USB port and speaker grilles.

As you can see from the case renders, the Samsung Galaxy A20e seems to be sharing the design elements with the Galaxy A20, which was launched recently. Sadly, only a few details regarding the handset’s specifications are available at the moment. Recent certifications have suggested that the phone will have Bluetooth 5.0 support, and will boot Android 9.0 Pie out of the box. We expect the Galaxy A20e to be a compact variant of the Galaxy A20, which features a large 6.4-inch display. We’ll know more in just a matter of days when Samsung launches the phone officially.