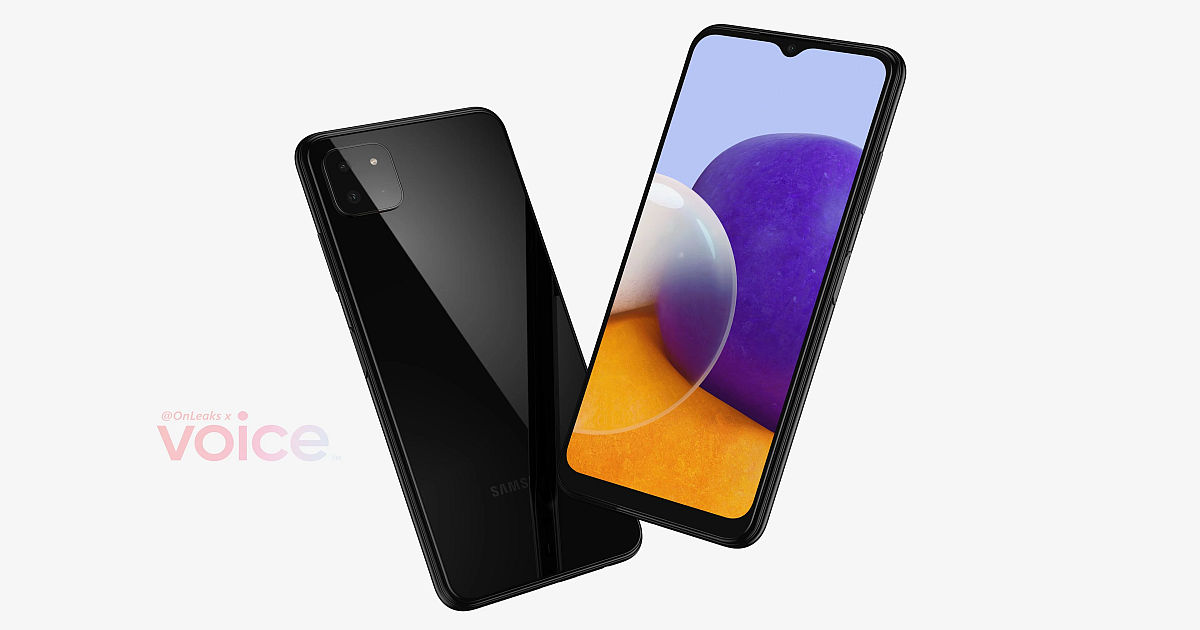 We learned about the Samsung Galaxy A22 5G price some time ago via a leak. It is tipped to be one of the most affordable 5G smartphones of 2021, rivalling the likes of the Realme Narzo 30 Pro and Realme 8 5G. Now, we have our first look at the Samsung Galaxy A22 thanks to leaked renders posted by Steve Hemmerstoffer aka @OnLeaks on Voice. The Galaxy A22 5G renders give us a good idea about its design and a brief glimpse into some key specifications as well.

Also read: Samsung Galaxy A22 5G price leaked; tipped to be the brand’s most affordable 5G phone of 2021

Samsung Galaxy A22 renders leak out

As per the renders, the Samsung Galaxy A22 comes with three camera sensors at the back in a square-shaped module, a waterdrop notch, and a side-mounted fingerprint sensor. The last bit suggests the phone will come with an LCD display instead of an AMOLED panel.

Little is known about the Galaxy A22 5G specifications at this point. Given that it is a 5G-ready device, it will probably run a MediaTek Dimensity chipset. The Qualcomm Snapdragon 480 isn’t out of the question either. Its 5G connectivity will come at a cost, though. Display and cameras are often the first two parts that get the axe, so the Galaxy A22 5G will probably stick to an HD+ LCD panel hopefully clocked at up to 90Hz refresh rate.

At the back, we’re probably getting a 48MP primary sensor, ultra-wide-angle lens, and a macro/depth sensor. Given that it is a successor to the Galaxy A21s in a manner of speaking, we can expect both devices to share several traits, such as a 5,000mAh battery that supports 15W fast charging and a 13MP selfie camera. The exact Samsung Galaxy A22 5G launch date is still unknown, but it shouldn’t be long before Samsung tells us.