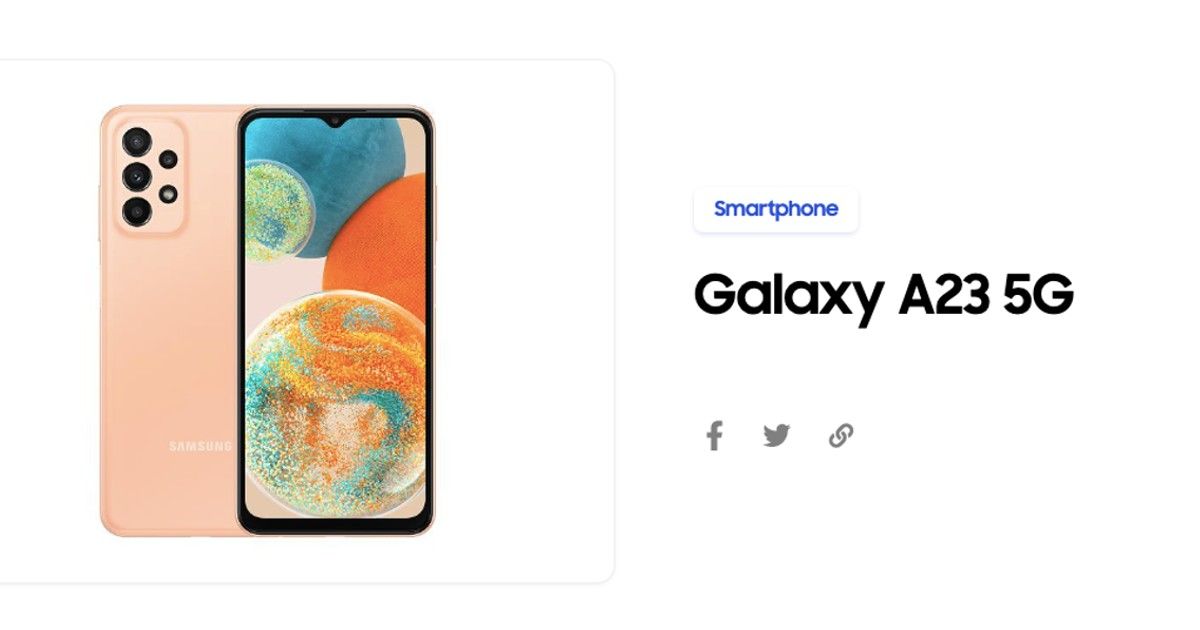 Samsung has quietly launched the Samsung Galaxy A23 5G and has listed it on the website with the specifications and images of the phone. It has a 5,000mAh battery, 50MP quad camera setup, and a 6.6-inch Infinity-V display with full-HD+ resolution. Samsung is still silent about the price and its Indian availability of the handset. However, the phone will be powered by an octa-core processor and will run on Android 12-based One UI 4.1. Let’s look at what the Samsung Galaxy A23 5G has to offer.

Samsung Galaxy A23 5G flaunts a 6.6-inch Infinity-V display with a full-HD+ resolution. The name of the chipset has not yet been revealed by Samsung but the Galaxy A23 5G will be powered by an octa-core SoC. It comes in 3 RAM options: 4GB, 6GB, and 8GB and has 64GB and 128GB inbuilt storage. The storage can be extended up to 1TB via microSD. A 5,000 mAh battery and dual-band Wi-Fi and Bluetooth v5.1 connectivity features keep the lights on.

Moving to the optics, Samsung Galaxy A23 5G  has a quad camera setup: 50MP primary sensor, a 5-megapixel ultra-wide angle lens, a 2-megapixel macro lens, and another 2MP depth sensor. An 8MP snapper at the front with an f/2.2 aperture takes care of the needs of selfie and video calling lovers. Its primary rear camera offers optical image stabilisation.

The handset measures 165.4 x 76.9 x 8.4mm in dimensions and weighs about 197g. It is most likely to come in White, Pink, Black, and Blue colour options. However, the official marketing names of the variants have not yet been announced by Samsung. And as far as the sensors are concerned, the Samsung Galaxy A23 5G  will come with a  fingerprint scanner, a Geomagnetic sensor, a Grip sensor, a gyro sensor, an accelerometer, a Virtual Lighting sensor, and a Virtual Proximity sensor.