To take on Chinese competition, Samsung is bringing an arsenal of budget smartphones with new technologies. In 2018, it launched the Galaxy A9 (review), which was the first ever mid-range device with a quad-camera setup. Samsung plans on bringing high-end technology and features to the mid-range segment with the help of the A series phones. It plans on bringing several A series phones in the first half of 2019 and one of them could be the Galaxy A30.

The Galaxy A30 will be a budget smartphone with good specifications. The phone has just been spotted on the benchmarking site Geekbench. The listing reveals that the phone will be just as powerful as last year’s Galaxy A8 and the upcoming Galaxy M20. The device seems to be equipped with Samsung’s Exynos 7885 chipset, which is coupled with 4GB of RAM. The phone also appears to be running the latest Android 9.0 Pie software. 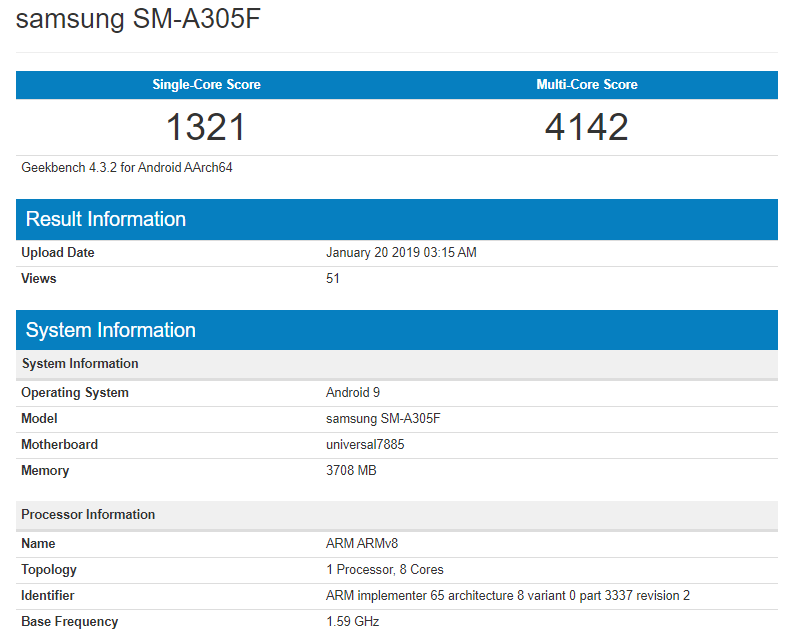 The Samsung Galaxy A50 is said to feature an Infinity-V display with an in-display fingerprint scanner, a 4,000mAh battery and a triple-rear camera setup, according to our sources. Samsung will reportedly launch around 10 A series phones including the Galaxy A70 and Galaxy A90. We are not exactly sure when the first new A series phone will arrive, but it will only be launched after Samsung unveils the Galaxy S10 on February 20th. Before the launch of the S10, we will be seeing the new Galaxy M series phones from the company, which is being released on January 28th. We recently reported that the Galaxy M series phones will start at Rs 8,990 in India and it will feature good specifications.

Samsung Galaxy A30 with 4GB RAM, Exynos 7885 and Android Pie spotted on Geekbench