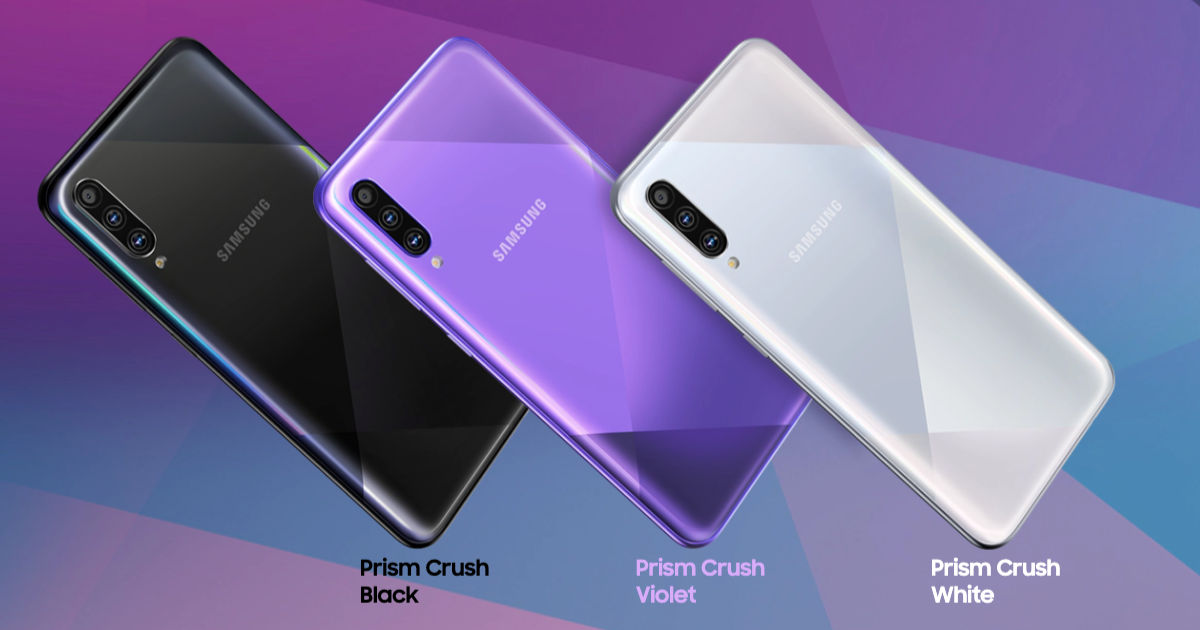 Samsung Galaxy A30s price in India will be Rs 16,999 for the sole 4GB and 64GB option. The Galaxy A50s, on the other hand, will be available with base 4GB RAM + 128GB storage option and the top-end 6GB RAM + 128GB storage option that are priced at Rs 22,999 and Rs 24,999, respectively. Both the handsets come in Prism Crush Black, Prism Crush White, Prism Crush Violet, and Prism Crush Green colour options. The Galaxy A30s and Galaxy A50s will go for sale starting today in India. The handsets can be purchased from Amazon, Paytm Mall, Flipkart, Samsung online store and the brand’s Opera House in Bengaluru.

The Samsung Galaxy A30s sports a 6.4-inch HD+ Infinity-V Super AMOLED display and has an in-display fingerprint scanner. The handset is powered by Samsung’s Exynos 7904 mobile platform, aided by 3GB RAM + 32GB storage and 4GB RAM + 128GB storage. The storage is further expandable up to 512GB using a microSD card. The handset boots Android 9 Pie-based OneUI out of the box and houses a 4,000mAh battery with 15W fast charging.

For photography, the Galaxy A30s sports a 25-megapixel (f/1.7) primary sensor paired with a 5-megapixel depth sensor with f/2.2 aperture and an 8-megapixel ultra-wide-angle camera with f/2.2 aperture setup at the back. The phone’s front camera is equipped with a 16-megapixel shooter for selfies and video calling. The connectivity options include 3.5mm audio jack, FM Radio, Dual 4G VoLTE, Wi-Fi, Bluetooth 5, GPS + GLONASS, USB Type-C.

The mid-range Samsung Galaxy A50s, on the other hand, is powered by Exynos 9611 10nm chipset with Mali-G72 GPU and up to 6GB of RAM. In the imaging department, the phone features triple cameras with 48-megapixel (f/2.0) primary sensor with night mode + 5-megapixel depth sensor with f/2.2 aperture + 8-megapixel ultra-wide-angle camera with f/2.2 aperture on the rear. The front camera gets a 32-megapixel shooter with an f/2.0 aperture lens. It comes with a dedicated Night Mode.

The A50s sports a 6.4-inch Infinity-U Super AMOLED display with full HD+ resolution. The phone comes with up to 64GB and 128GB storage options, which are expandable by another 512GB. The Galaxy A50s measures 158.5 x 74.5 x 7.7mm and weighs 169g. The handset comes pre-loaded with the same OS, connectivity options, and battery as the Galaxy A30s smartphone. Other common features between the A30s and A50s include Alive Screen, Dolby Atmos support, and Samsung Pay.