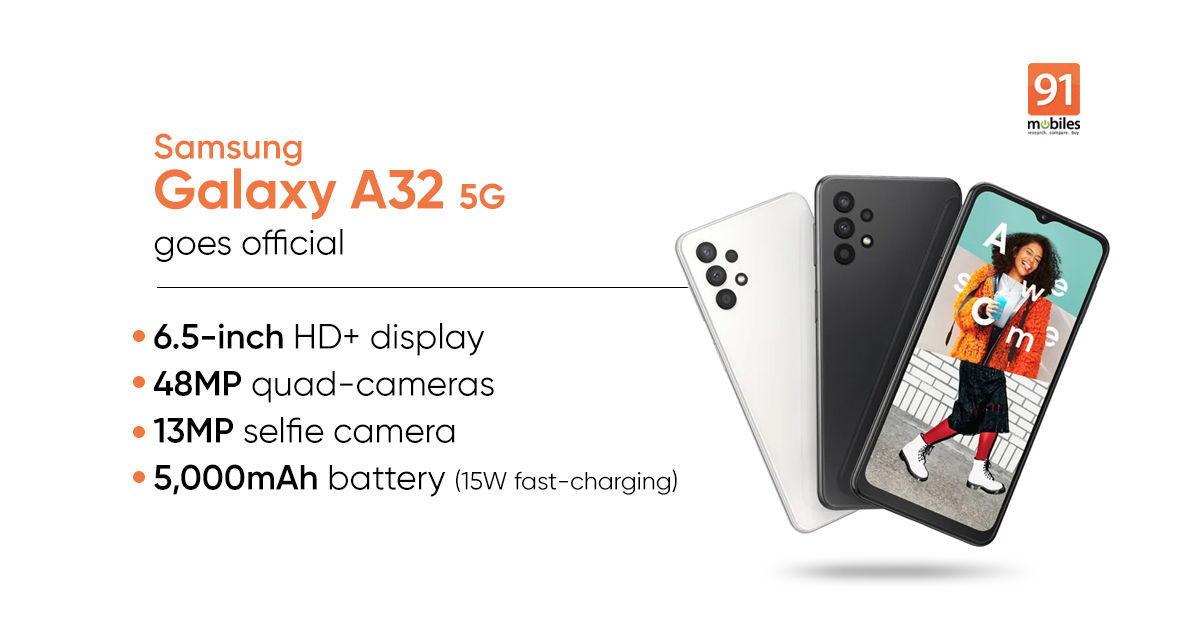 Samsung Galaxy A32 5G price and specifications have been revealed as the phone quietly goes official in Germany after numerous leaks and reports. The handset comes as a successor to the Galaxy A31 and brings 5G connectivity. Since it is a budget offering from the South Korean giant, the design has nothing unique to boast about. The handset has a waterdrop notch atop of the display to house the selfie camera, a side-mounted fingerprint sensor, quad-cameras, and sizeable bezels. Key Samsung Galaxy A32 5G specifications include a 6.5-inch HD+ display, octa-core processor, up to 128GB storage, and 48MP primary camera. Here’s a look at the Samsung Galaxy A32 price, complete specs, and more.

Samsung Galaxy A32 price is set at €279 (around Rs 24,800) for the 64GB model and €299 (approx Rs 26,600) for the 128GB model. But the company hasn’t revealed the exact configurations at the moment. It comes in Awesome Black, Awesome Violet, Awesome White, and Awesome Blue colour options. The phone will be on sale in Europe from February 12th. There’s no word regarding availability in other markets.

Samsung Galaxy A32 flaunts a 6.5-inch HD+ Infinity-V TFT LCD display with a sizeable chin at the bottom. Samsung only says the phone is powered by an octa-core processor and kept the chipset details under wraps, for now. However, rumours suggest MediaTek Dimensity 720 SoC is ticking at its core. It comes in 4/6/8GB RAM options (depending on the region) paired with up to 128GB internal storage that should be expandable via a microSD card slot. The South Korean giant hasn’t revealed the Android version it will ship with. The Galaxy A32 packs a 5,000mAh battery with 15W fast-charging support and a side-mounted fingerprint sensor for security.

As for the cameras, the Samsung Galaxy A32 has quad-cameras at the back with a 48MP (f/1.8 aperture) primary sensor, an 8MP (f/2.2 aperture) ultra-wide lens, a 2MP (f/2.2 aperture) depth sensor, and a 5MP (f/2.4 aperture) macro lens. There is a 13MP snapper on the front for selfies and video chats. Connectivity features include 5G, 4G LTE, dual-band Wi-Fi, Bluetooth, GPS, and USB Type-C port for charging and data sync. The Galaxy A42 measures 76.1mm X 164.2mm X 9.1mm and weighs 205 grams. It has support for surround sound with Dolby Atmos technology (Dolby Digital and Dolby Digital Plus).