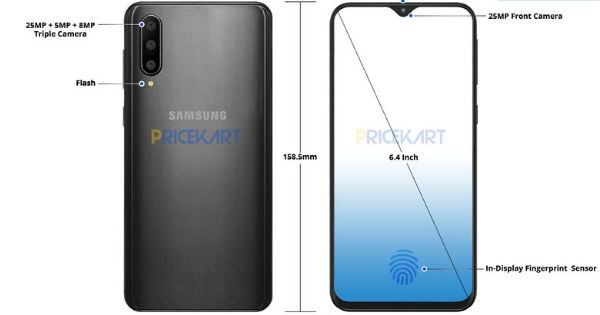 “The Samsung Galaxy A50 is tipped to feature a 6.4-inch Infinity-V display and in-display fingerprint sensor”

Samsung is said to be working on as many as nine smartphones in its upcoming mid-range Galaxy A series (2019). The line-up is said to be starting from Galaxy A10 and goes up till Galaxy A90. While there has been no word regarding the Galaxy A70 and A90, we have had a pretty good look at the specs of the Galaxy A50 in the recent past. Now, PriceKart has managed to obtain alleged renders of the smartphone, giving us our first look at it. 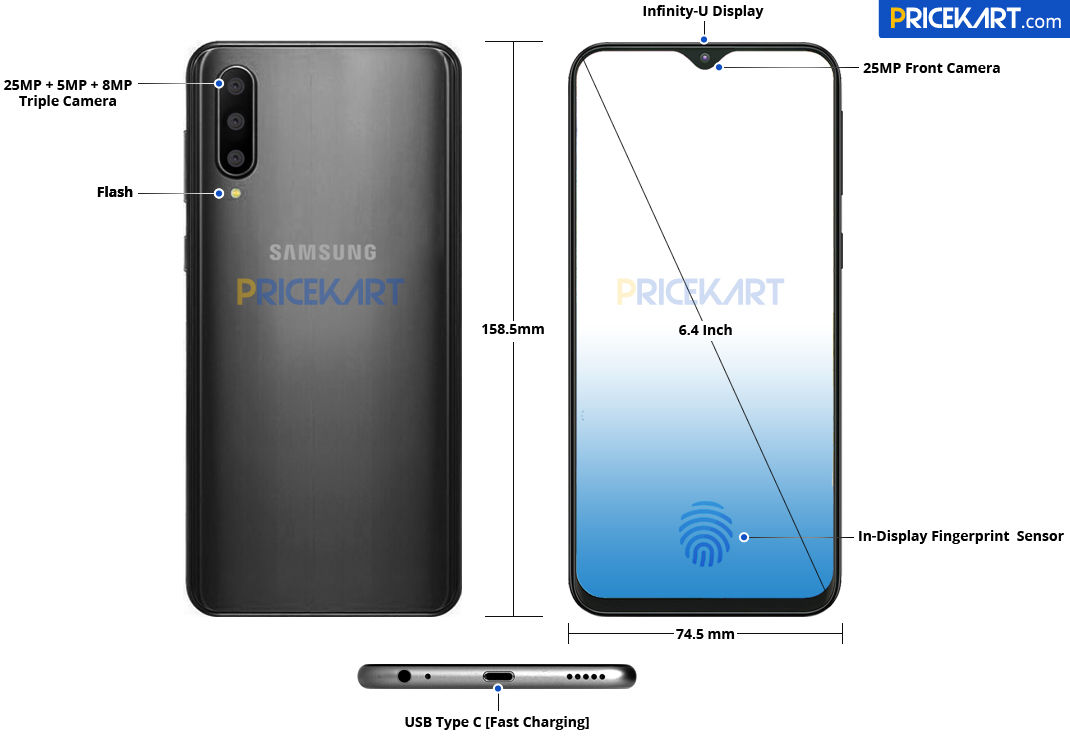 The detailed image of the Galaxy A50 leaves nothing to the imagination as it reveals the design, display, dimensions and camera details of the handset. The new details corroborates with the earlier leak that revealed the whole spec sheet of the handset. We can see the black variant of the handset with the 3D Glossy Plastic construct and 6.4-inch Infinity-U display. The latter is expected to come with Super AMOLED panel with 19.5:9 aspect ratio and 1,080 x 2,340-pixel resolution. The render also confirms the presence of the in-display fingerprint scanner on the bottom edge of the display.

Further, the Galaxy A50 renders also reveal the camera details of the upcoming smartphone, which are also in line with the previous leak. We can see the triple camera module, vertically aligned in the top left corner of the rear panel accompanied by the LED flash at the bottom. The camera setup is tipped to comprise of a 25-megapixel primary shooter, assisted by 5-megapixel depth sensor and an 8-megapixel ultra-wide lens. On the front, the handset will feature a 25-megapixel selfie shooter housed in the waterdrop notch. The renders also reveal the 3.5mm audio jack, USB Type-C port, and speaker grille at the bottom.

Previous leaks have revealed the Samsung Galaxy A50 specifications, including a 2.3GHz octa-core Exynos 9610 SoC, up to 6GB RAM, up to 128GB storage, and 4,000mAh battery. As of now, there is no official word on the launch timeline and pricing of the handset. However, according to rumours, Samsung might launch these smartphones in March, with Galaxy A70 and Galaxy A90 slated for later this year.