91mobiles.com
Home News Samsung Galaxy A52 and Galaxy A72 launch today: how to watch livestream,...
Highlights 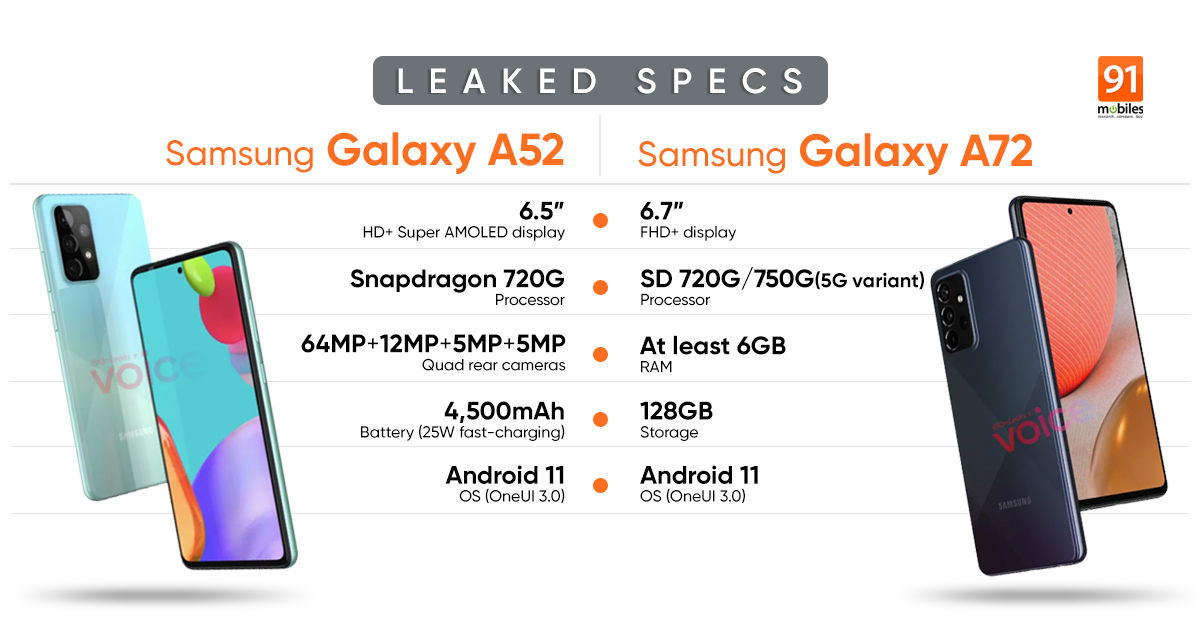 The Samsung Galaxy A52 and Galaxy A72 launch event will start at 7:30 pm IST. It will be broadcasted via Samsung’s official YouTube channel. The livestream link has also been attached below, so you can catch the action right here.

Samsung Galaxy A52, Galaxy A72 prices in India (expected)

Samsung Galaxy A52 And Galaxy A72 specifications

Samsung Galaxy A52 specifications will likely include 6.5-inch FHD+ AMOLED clocked at 90Hz. The 4G model is expected to be powered by the Qualcomm Snapdragon 720G SoC, whereas the 5G variant could substitute that with a Snapdragon 750G. Both chipsets will be coupled with up to 8GB RAM and 128GB expandable storage. The Samsung Galaxy A52 will reportedly feature a quad-camera setup at the back with a 64MP primary sensor, a 12MP telephoto lens, a 5MP macro lens, and a 5MP depth sensor. A 32MP module will take care of video calls and selfies. The smartphone will draw power from a 4,500mAh battery with 25W fast-charging support.

The Samsung Galaxy A72 is expected to feature a 6.7-inch AMOLED display with FHD+ resolution and a 90Hz refresh rate. Everything else, including the chipsets, memory/storage configurations, and front camera’s megapixel count. The 5G variant will apparently pack a 120Hz screen too, according to one rumour. However, the rear camera array is tipped to be marginally better than that of the Galaxy A52, but we don’t know the exact improvements it will bring at this point. Lastly, the battery gets upgraded to a 5,000mAh cell with the same wattage.