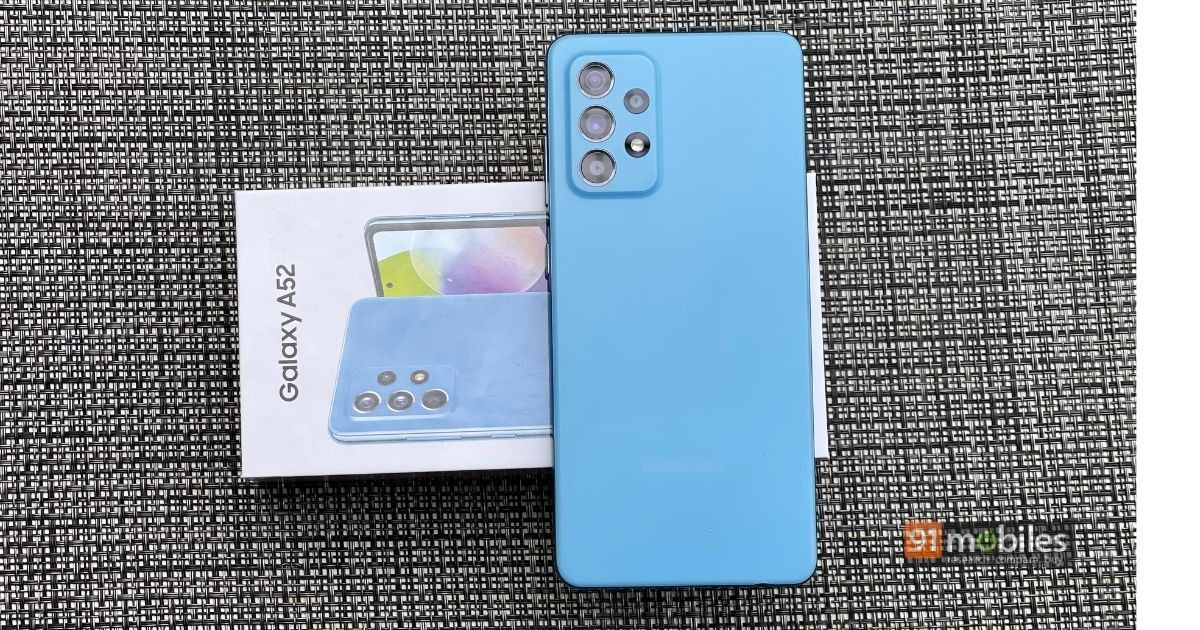 Samsung‘s strategy with its M, A, and F series smartphones does seem a bit convoluted at the moment, given that the positioning of some of the devices overlaps with each other. Thankfully though, the latest members of the Galaxy A series portfolio fall right into expected territory, i.e. the mid-range segment. I’m referring to the new Galaxy A52 and A72, both of which are priced in the mid-range, and offer an interesting bunch of features. 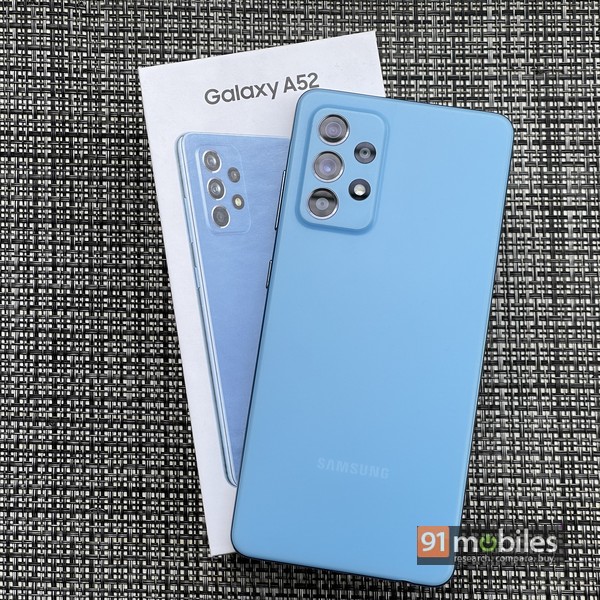 As far as I’m concerned, one of the most important highlights of the devices is the IP67 rating. In fact, I think the Galaxy A52 could be the most affordable smartphone to offer the waterproofing feature, and that by itself, is a pretty strong proposition. Here, I shall be giving you a closer glimpse at the Galaxy A52, and the goodies it brings with it. 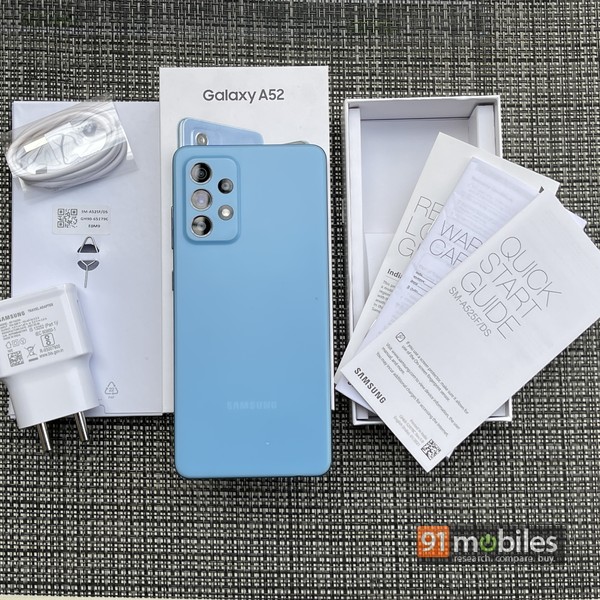 The unboxing experience is bog-standard, except for the fact that thankfully, a charger is included in the box. Thank God for small mercies. The box itself is a typical white cardboard container with an image of the phone on top. Inside, the phone lies atop cavities for the charger and a USB Type-A to Type-C cable. Do note that the in-box charger is 15W, while the max charging speed supported by the phone is 25W. Bummer. A cardboard envelope can be found in the inside of the lid, packing some basic documentation. It’s also a tad disappointing that Samsung hasn’t included a basic silicone case, and there are no earphones in the box either. Moving on to the smartphone, the Galaxy A52 looks elegant in a soft, light hue of blue, or Awesome Blue as Samsung likes to call it. The phone can also be had in violet, black and white shades. The design is subdued and subtle, and a far cry from some of the more flamboyant gradient designs we’ve been seeing from a few other brands. The build quality is great, despite the polycarbonate build, and the colour-matched frame on the edges has a glossy metallic finish. 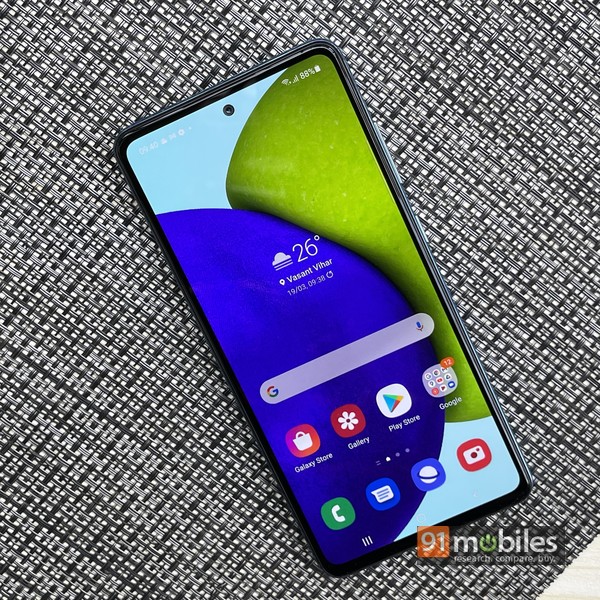 Upfront is a 6.5-inch AMOLED screen layered with Gorilla Glass 5, and offering FHD resolution along with 90Hz refresh rate. The selfie shooter is ensconced in a punch hole on top. An in-display fingerprint scanner handles authentication. The bezels on the sides are slim, but noticeable. The left spine of the phone is barren, but the right edge sports the power button and the volume rocker, with the top housing the SIM tray. The bottom edge holds the USB-C port and the speaker. On the rear, the most noticeable element is the camera module, with the colour-matched, rectangular window housing a quad-camera setup and a flash. On the whole, the fit and finish is great, and the device fits well in the hand thanks to its compact size. 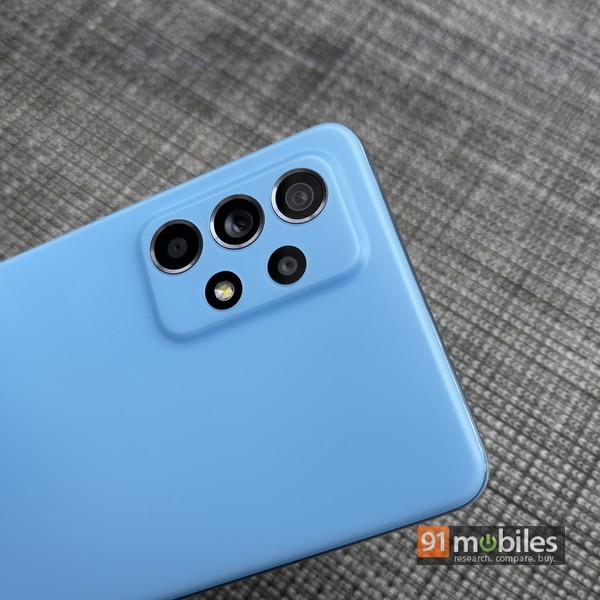 There’s a fair bit of emphasis on the cameras, with the quad-cam setup comprising a 64MP, f/1.8 main sensor, featuring optical image stabilisation (OIS). This is mated to 12MP ultra-wide (f/2.2), 5MP macro (f/2.4) and 5MP depth (f/2.4) sensors. The selfie shooter upfront has a 32MP sensor. The device can shoot 4K video at 30fps, and features the super steady mode too. Samsung has even included the handy Single Take feature that shoots a bunch of different photos and videos with one tap. A new feature that has been included is the so-called Fun mode that integrates Snapchat filters right into the camera app. The initial camera shots do show a lot of promise. 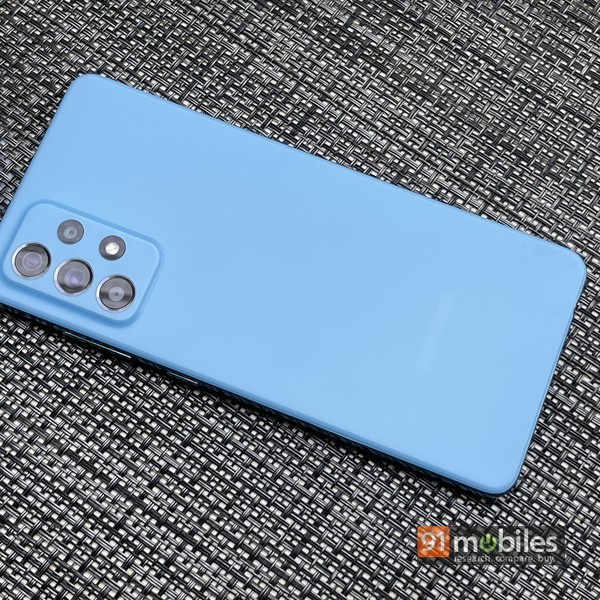 Instead of taking the Exynos route, Samsung has chosen to equip the Galaxy A52 with the Snapdragon 720G SoC. The 8nm chipset is a tried-and-tested SoC, and one that we’ve experienced earlier on a bunch of smartphones from Xiaomi, Realme, POCO and others. It’s known to deliver smooth performance, though how well it performs on the Galaxy A52 is something I will be talking about in the full review of the device. RAM options include 6GB and 8GB, and you can also choose between 128GB and 256GB storage variants. The lack of 5G might prove to be a deal-breaker for some potential buyers though, mainly because there are other smartphones offering this feature in this price segment. In the brief period I used the Galaxy A52 for, it definitely didn’t show any lags or freezes. A 4,500mAh battery powers the phone, and as mentioned earlier, you get support for 25W fast charging (with the in-box charger supporting 15W). 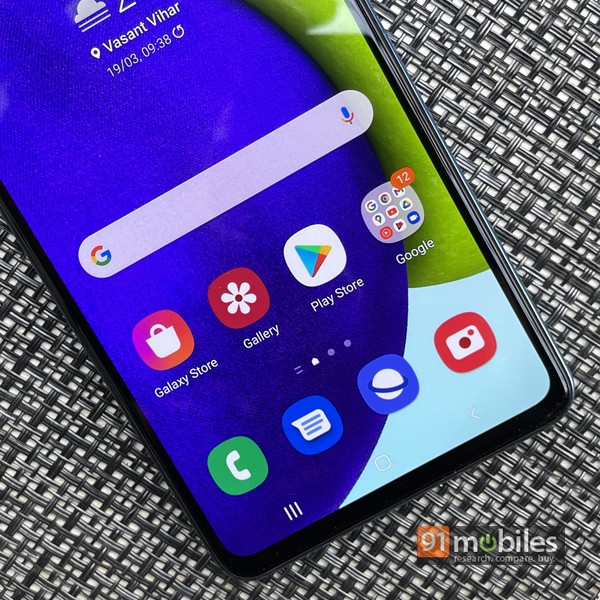 For software, you get Android 11 with Samsung’s One UI 3.1. In that sense, we know exactly what to expect. Apart from offering a neat, clean UI, the platform provides access to a bunch of services from Samsung’s ecosystem, including Samsung Cloud and Samsung Pay.

Overall, for an asking price of an estimated Rs 27k (exact price TBC), the Galaxy A52 does come across as an interesting option. As I mentioned earlier, the fact that it’s waterproof could be one of the strongest points in its favour, and one that could help make it stand out in a crowded market.