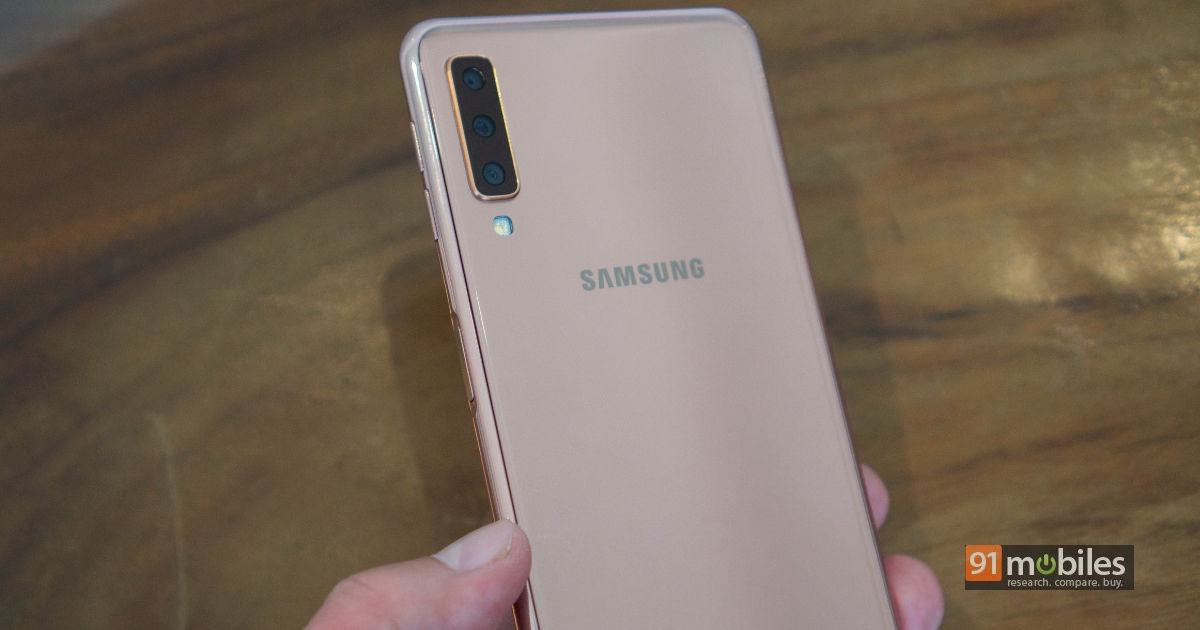 Phone cameras have been used as differentiators ever since snappers first started appearing on mobiles, but in the initial days, the brands mainly focused on increasing megapixel count. Fast forward to today, and it’s looking like manufacturers are soon going to be competing to see who offers the most numbers of cameras on a smartphone. Dual cameras have become standard by now, and no one raises an eyebrow even if a phone has two sensors at front… but Huawei created ripples recently when it launched the P20 Pro (review) with three rear cameras. And now it’s Samsung‘s turn to launch a smartphone sporting three cameras at the rear. Enter the Galaxy A7 (2018). What’s really interesting is the fact that the Galaxy A7 is actually a mid-ranger, and not a premium flagship… because such innovations are usually reserved for high-end devices. Let’s take a closer look. 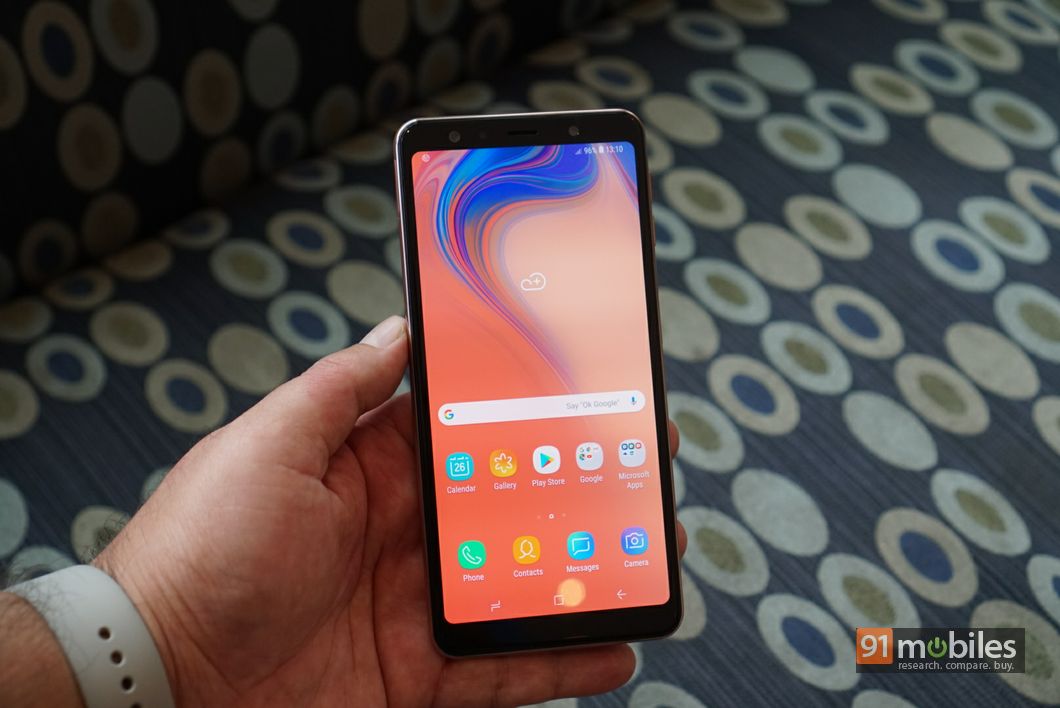 The first thing you’d notice about the Galaxy A7 is that it feels quite blocky in terms of design. While the glass-clad body looks nice, there are hardly any curves… with both the front and back being completely flat. Another aspect that jumps out is the notch, or to put it more precisely, the lack thereof. The 6-inch FHD+ panel on the fascia comes with slim bezels on the sides, but the bezels are wider on the top and bottom, as the brand hasn’t taken the notch route. On top is the earpiece, placed next to the high-res 24MP selfie snapper, a dedicated front-facing flash, and the usual array of sensors. The Super AMOLED screen bears an aspect ratio of 18.5:9, and displays nice, punchy colours.

On the left is the SIM tray, while the micro-USB port (no Type-C here guys), and 3.5mm headset port are located on the bottom. The top is home to the secondary microphone, while the right is where you’ll find two discrete volume buttons and the power key. There doesn’t seem to be a fingerprint scanner anywhere… and no, Samsung hasn’t utilised an under-screen sensor on the Galaxy A7. In fact, it’s the power button on the right spine that hides the fingerprint sensor, an implementation that we’ve seen on Sony’s premium smartphones in the past. 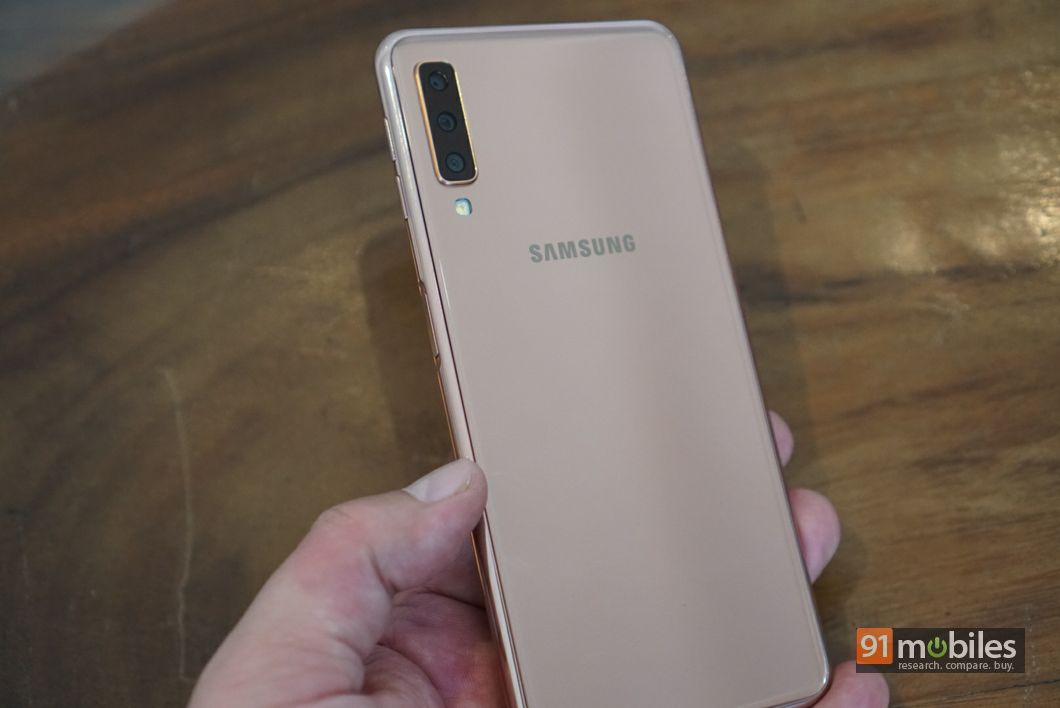 Switch to the back, and you’ll see the A7’s mainstay – the triple camera setup. It comprises a 24MP primary sensor, an 8MP 120-degree wide angle snapper, and a 5MP depth sensor for bokeh. Samsung has loaded quite a few features in the camera app too, as you get features like customisable Live Focus, an AI-based scene optimiser, and AR emojis, among others. The primary camera employs pixel binning, promising great shots regardless of shooting conditions. The test shots we captured show a lot of promise, but it wouldn’t be fair for us to judge the Galaxy A7’s cameras without trying them out properly… so do give us a bit of time for that.

The Galaxy A7 is powered by an Exynos 7885 SoC, which includes a 14 nm 2.2GHz octa-core processor. That’s mated to 4 or 6GB of RAM, along with 64GB or 128GB of storage respectively, based on the variant you choose. A 3,300mAh battery with fast charging support provides the fuel. Software-wise, you get Android Oreo with Samsung’s Experience UI and the usual set of preloaded apps.

Priced very aggressively, as least going by Samsung’s standards, the Galaxy A7 looks like a very interesting proposition. The 4GB + 64GB model costs Rs 23,990, while the higher variant carries a sticker price of Rs 28,990. Camera innovations aside though, it’s still a mid-ranger, and competes against the likes of the Vivo V11 Pro (review), OPPO F9 Pro (review) and the Nokia 7 Plus (review). However, its nemesis has to be the POCO F1 (review), the phone that offers a Snapdragon 845 processor in the same price range. Then there’s the ASUS ZenFone 5Z (review) that competes with the higher-end variant of the Galaxy A7, and even the OnePlus 6 (review) come close, at least as far as pricing is concerned. The three rear shooters do make Samsung’s new Galaxy A7 stand out from the crowd, so it’d be interesting to see what prospective buyers make of it. Our upcoming review will shed light on how the new phone from Samsung fares as a daily driver… watch this space.