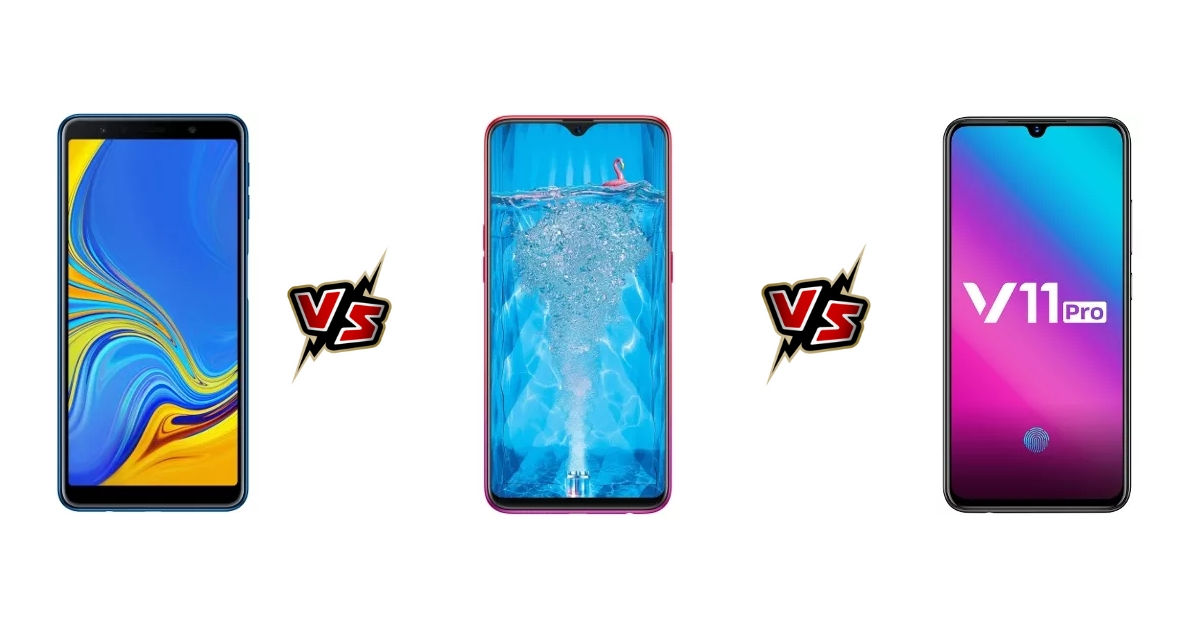 The Samsung Galaxy A7 (2018) (first impressions) has come as a pleasant surprise. Not only it’s the brand’s first phone with a triple rear camera setup, but it’s also the only smartphone with a tri-cam module under Rs 30,000. The handset’s starting price of Rs 23,990 will definitely make it one of the most interesting products during the upcoming festive season. But that doesn’t mean it’s the only option in this segment. Samsung’s offering faces tough competition in the form of the OPPO F9 Pro (review) and the  Vivo V11 Pro (review). While they don’t offer triple cameras, they do have an impressive roster of specifications. So let’s stack these devices against each other to see which one’s the best option around Rs 25,000. 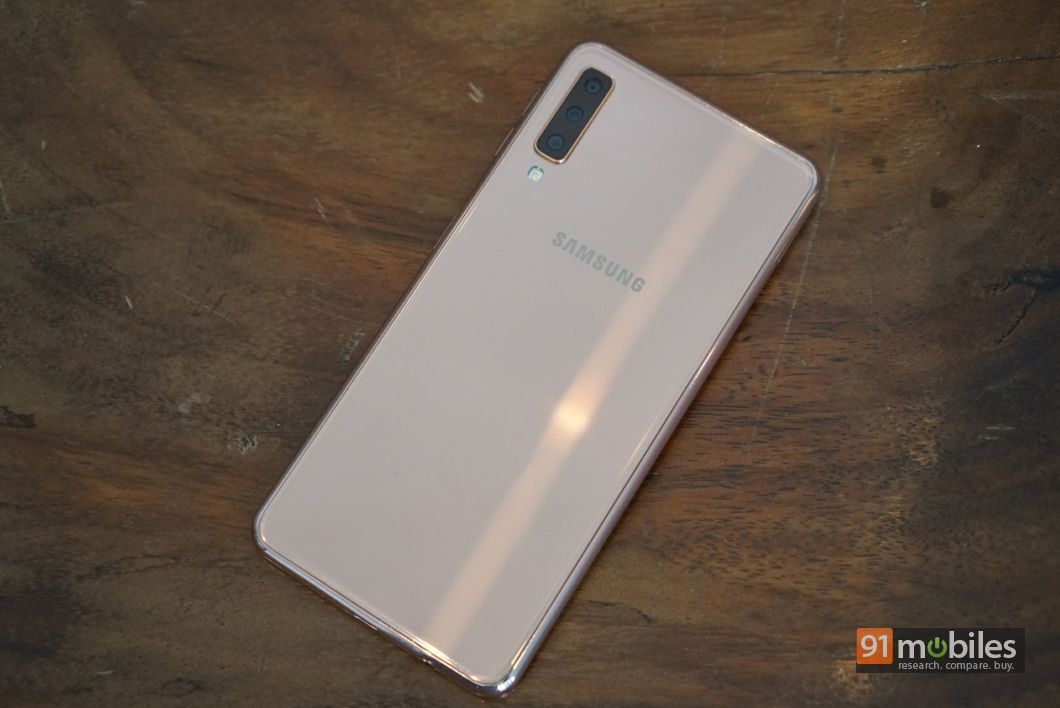 As we said, the triple-camera setup of the Samsung Galaxy A7 (2018) is its biggest pride. Its rear surface has these snappers placed vertically on the left side. You’ll notice that there’s no fingerprint scanner on its rear or its front. That’s because Samsung has moved it to its side, where it doubles up as a power button. The Vivo V11 Pro takes a different approach to the placement of the fingerprint reader as well. It features an in-display fingerprint sensor which turns the lower portion of the display into a scanner. The OPPO F9 Pro is the only phone among these three to sport a fingerprint scanning module on its rear surface. 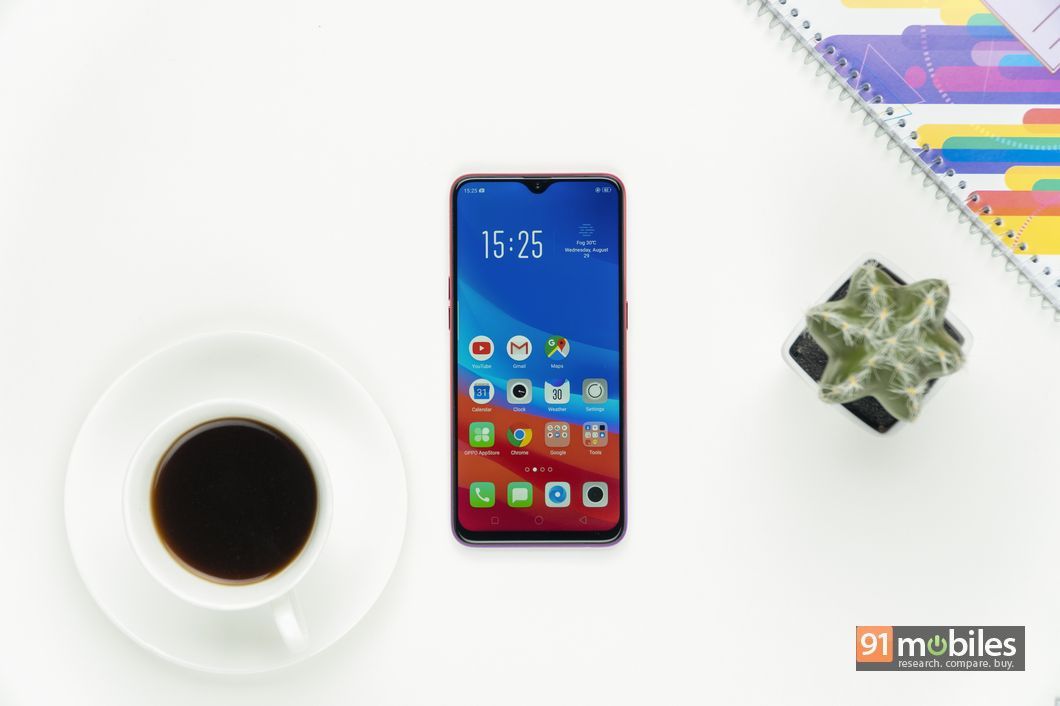 But the F9 Pro and V11 Pro’s claim to fame is their waterdrop screen that limits the notch to a tiny cut-out on top of the display. As opposed to that, the Samsung Galaxy A7 (2018) has gone for the company’s famed Infinity Display standard which gives you a tall display sans the notch. All three of these phones feature glass-sandwich designs, but the OPPO and Vivo handsets take their aesthetics game a step further. The F9 Pro comes with a petal-shaped pattern on its rear surface, while its special edition Starry Purple model ships with a twinkling star pattern that’s a delight to the eyes. The V11 Pro on the other hand, sports a two-tone gradient colour pattern on its rear surface. In comparison, the A7 (2018) simply features a glass back. 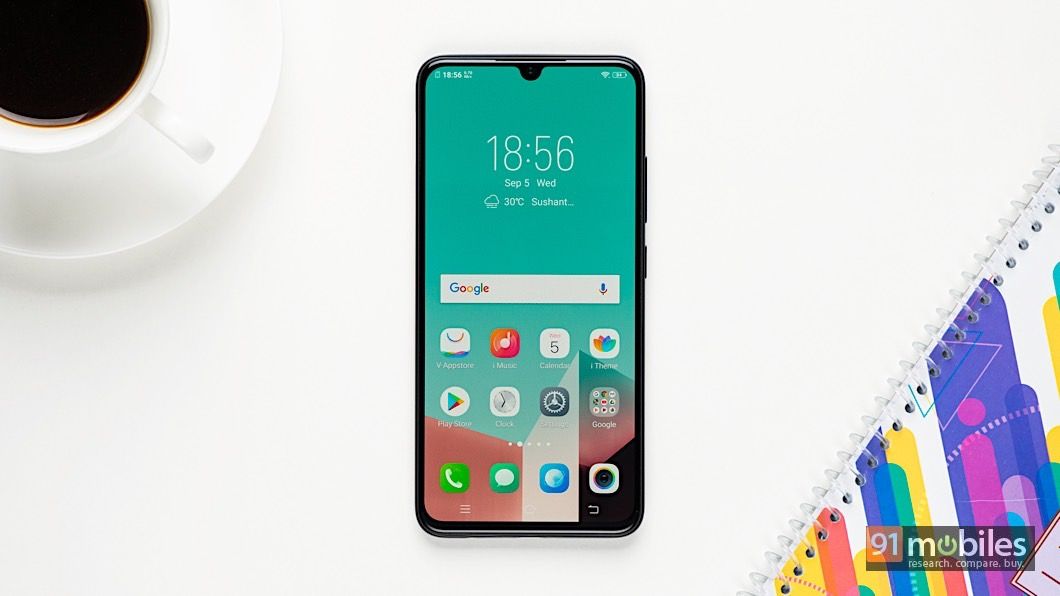 Coming to their displays, both the Galaxy A7 (2018) and Vivo V11 Pro ship with Super AMOLED panels measuring 6-inch and 6.41-inch, respectively. In contrast, the OPPO F9 Pro sports a 6.3-inch LCD screen. The displays on the trio offer full HD+ resolution, however, the Samsung handset continues with an 18.5:9 aspect ratio, whereas the other two devices offer taller 19.5:9 aspect ratio. 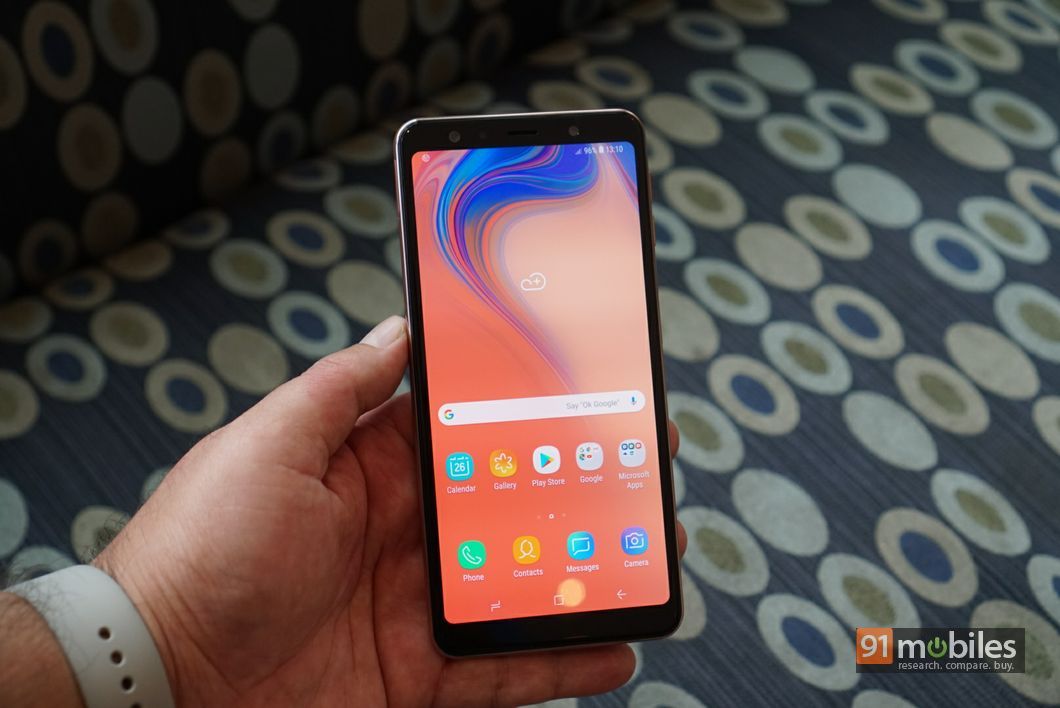 The new Galaxy A7 (2018) comes powered by an octa-core Samsung Exynos 7885 processor clocked at 2GHz. Its 4GB RAM model comes with 64GB of storage, while its 6GB RAM variant ships with 128GB of storage. OPPO has gone with the 2GHz octa-core MediaTek Helio P60 chipset for the F9 Pro. This SoC is paired with 4 or 6GB of RAM. Both these models come with 64GB of storage. The V11 Pro is the only one among the trifecta to come equipped by a Snapdragon chip. The phone is fuelled by a 2.2GHz octa-core Snapdragon 660 processor that’s mated with 6GB of RAM. The Vivo phone offers 64 of storage onboard. This makes the V11 Pro the strongest handset among the three. It’s so good to know that all these phones sport dedicated microSD card slots. 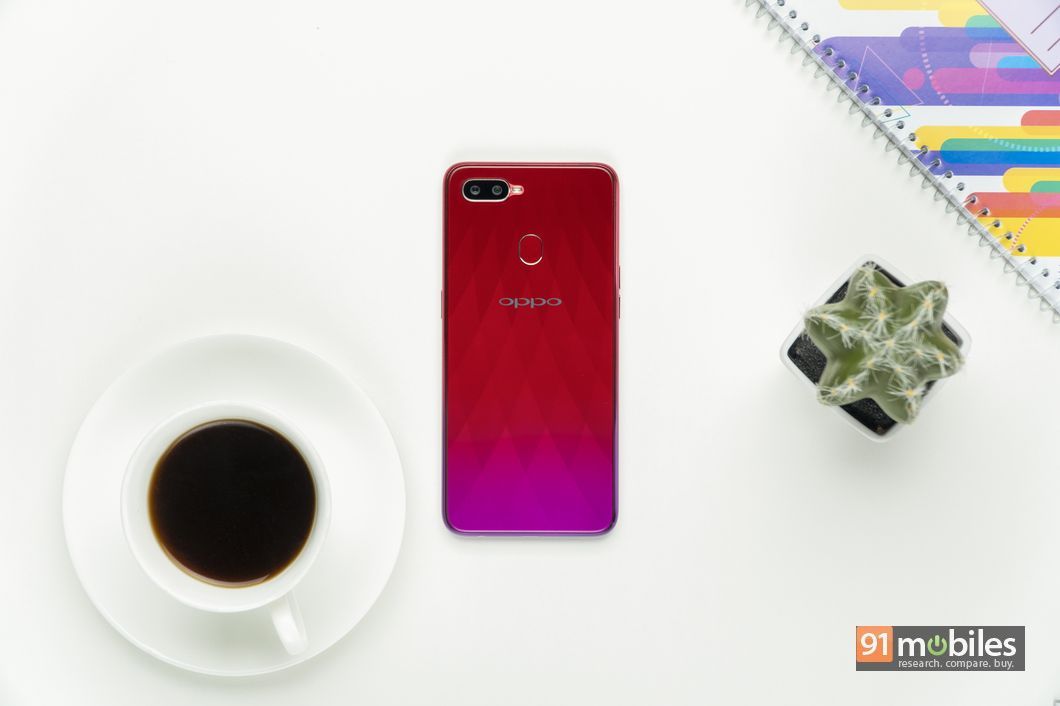 Android Oreo is the base software on each of these devices. Samsung’s TouchWiz UI, of course, can be found on the Galaxy A7 (2018). One of the most advertised features of this phone is its ability to move installed apps to the SD card. It comes pre-installed with Samsung Pay Mini and a number of other Samsung goodies like AR Emojis. The F9 Pro boots ColorOS, which has several intelligent camera features like scene recognition, beautification and more. The OPPO phone also features face unlock along with a new Smart Bar, which allows you to reply to messages while you’re gaming. The V11 Pro runs FunTouch OS and boasts smart camera additions, face unlock, Google Lens and an AI Game Mode. 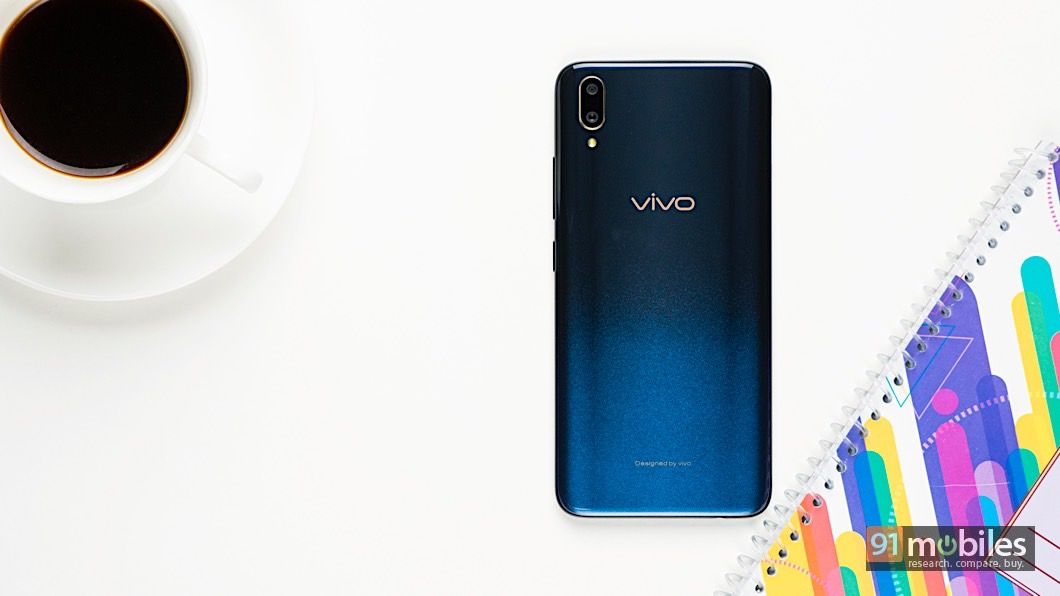 The triple-camera array on the Galaxy A7 (2018) includes a 24MP f/1.7 camera, an 8MP ultra-wide sensor and a 5MP depth shooter. The 8MP snapper allows the handset to capture significantly more area than normal cameras, and it works in the video mode as well. The presence of a depth-sensing unit also means that you’ll get a portrait mode, while the f/1.7 lens of the main shooter ensures that the phone can handle low-light situations. The dual-camera setup of the F9 Pro includes a 16-megapixel camera accompanied by a 2MP snapper, which makes portrait effects possible. The Vivo V11 Pro offers 12MP + 5MP arrangement to offer images with bokeh effects. For videos, both the Samsung and Vivo smartphone can capture 4K videos, while OPPO’s offering maxes out at 1080p.

Talking about the front cameras, the one on the Samsung handset is a 24MP unit which delivers iPhone-like lighting effects for your selfies. Both the F9 Pro and the V11 Pro on the other hand, ship with 25-megapixel sensors on their front surfaces. 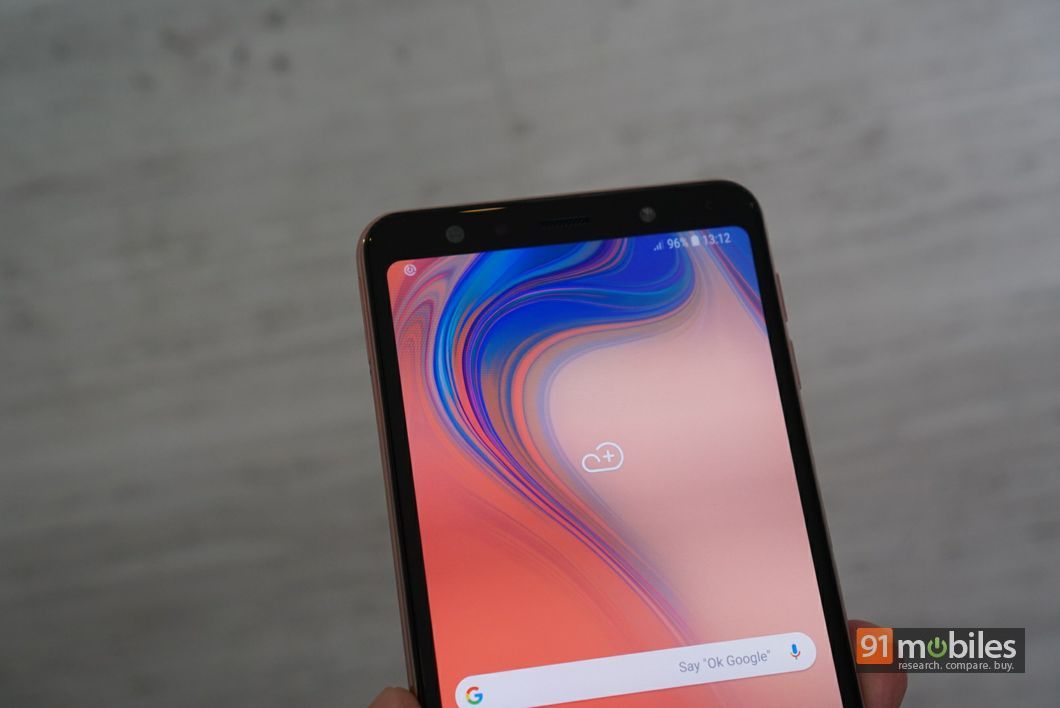 In terms of the battery, the devices offer similarly-sized cells. The Samsung handset opts for a 3300mAh unit, while the F9 Pro and V11 Pro ship with 3,500 and 3,400mAh packs, respectively. There’s no fast charging support on the Galaxy A7 (2018), but it’s indeed present on the other two. What makes the fast charging of the OPPO smartphone unique is its VOOC Flash Charge technology, which can top it up with 2 hours of talktime within just 5 minutes.

All three of these smartphones are strong propositions on their own. Photography fans will love the Samsung Galaxy A7 (2018) for its versatile imaging capabilities, while the OPPO F9 Pro and the Vivo V11 Pro are meant for those with a penchant for great looks and selfies.