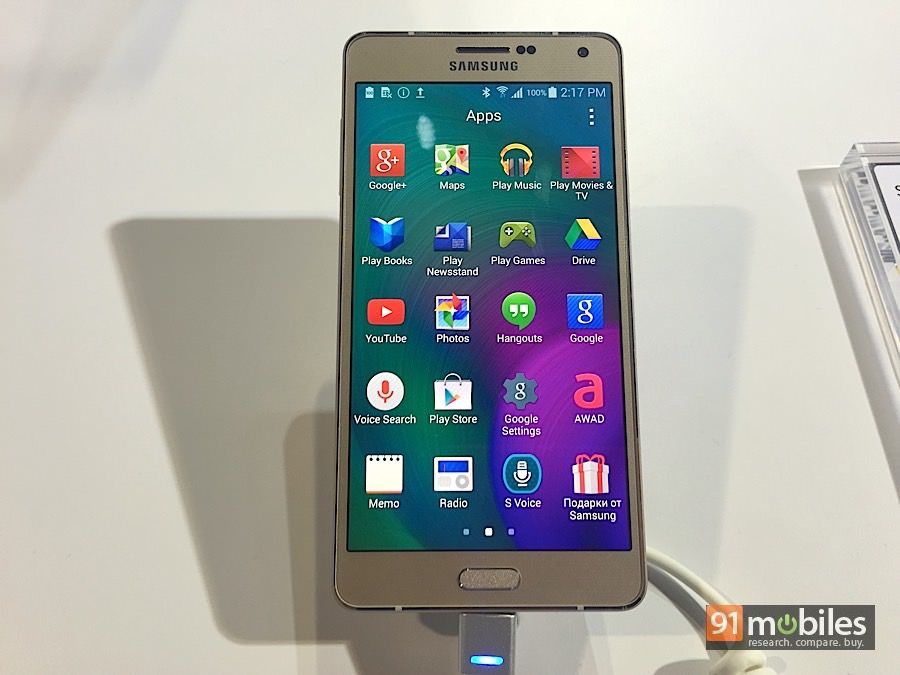 “The Galaxy A7 is the slimmest smartphone from Samsung yet“

Samsung has had to deal with a lot of flak for its unwavering decision to use plastic for most of its smartphones, but last year the manufacturer decided to move in a different direction with the metal-clad Galaxy Alpha (review). Following this, the brand released a range of similar metal-bodied devices under its A-series, such as the Galaxy A3 and Galaxy A5. Today, it launched its flagship smartphone of the range, the Galaxy A7 for Rs 30,499. Measuring a skinny 6.3mm around the waist, the Galaxy A7 is the slimmest Samsung Galaxy smartphone yet. It’s also 4G-enabled, supporting both Indian LTE bands – Band 3 (1,800MHz) and Band 40 (2,300MHz). At the Samsung Forum 2015 held in Bangkok, Thailand, we briefly got our hands on this loaded device. Here are our first impressions. 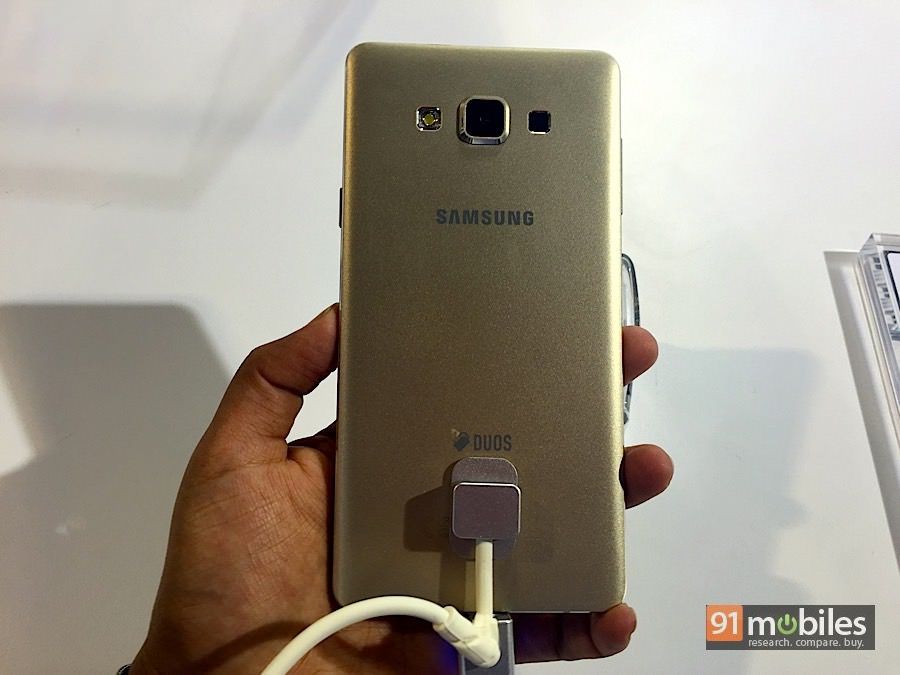 Samsung says the A7 is a full-metal device, but it isn’t. It boasts a unibody construction with a metal frame, but Samsung couldn’t resist using plastic, albeit with a metal-finish, for the the rear panel. That said, we infinitely prefer this finish to the ungainly dotted rear of the Galaxy S5 (review) and faux-leather back of the Note 4 (review). Even so, the Galaxy A7 feels very solid to hold. It isn’t a compact smartphone by any means, but the slim frame and narrow bezels make it easy to use with one hand. The edges are tipped in chrome, and the rounded corners bring some relief from the geometric aesthetic. 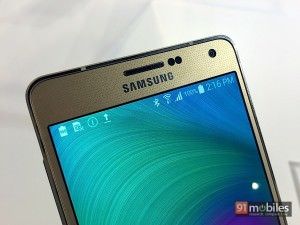 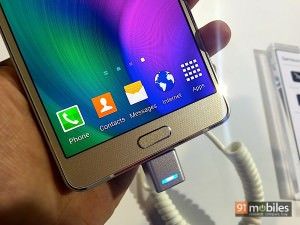 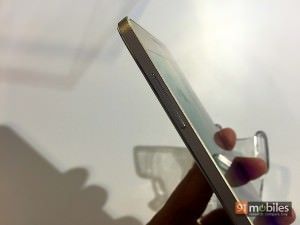 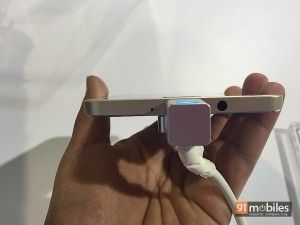 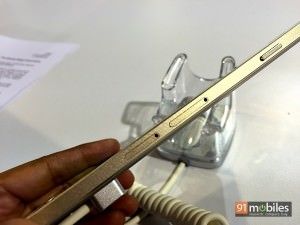 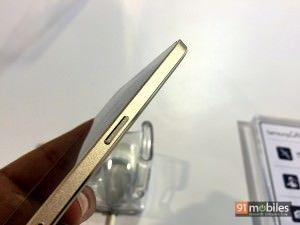 The front of the device is mostly taken up by the generous 5.5-inch display. Above the screen you’ll find the earpiece, Samsung branding, front 5MP camera and sensors. Below the display is the standard Samsung physical home button, flanked by backlit Android capacitive keys. The top edge is bare, while the micro-USB port and 3.5mm audio are located at the bottom. The volume rocker is located on the left, while the power button is on the right spine. Also on the right you’ll find two ejectable trays, for the microSD card slot and nano-SIM card slot. The microSD card slot also doubles up as a second micro-SIM card slot, in case you want to use it as a dual-SIM device. 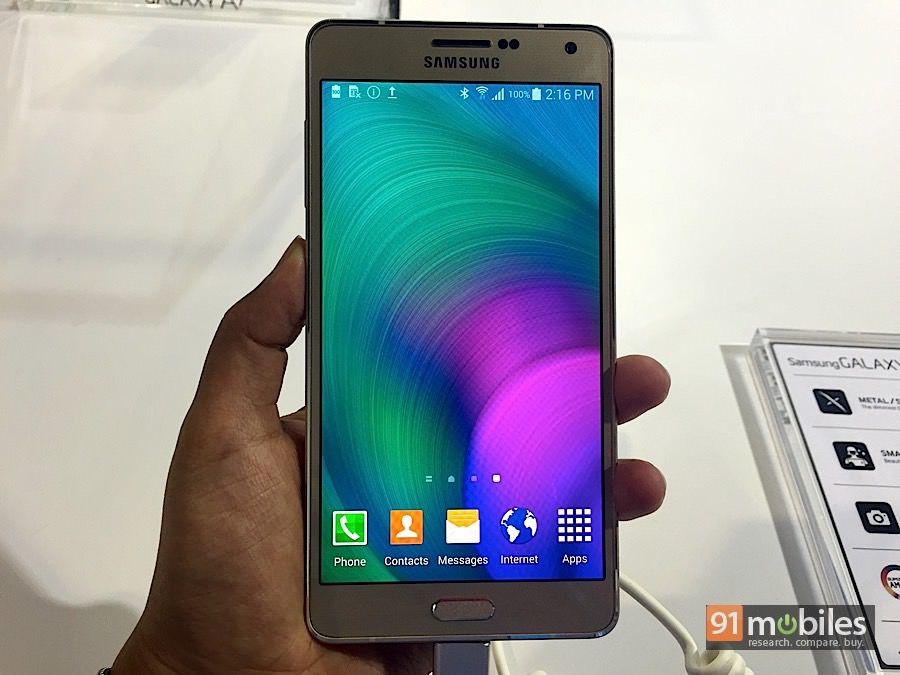 Taking pride of place is the generous 5.5-inch full HD display, which thanks to its Super AMOLED technology is bright, sharp and vibrant. The screen also gets a layer of Corning Gorilla Glass 4 on top to protect it against nicks and scratches. Powering the insides is an octa-core Snapdragon 615 processor consisting of two quad-core clusters clocked at 1.5GHz and 1.0GHz. The processor is mated to 2GB of RAM. There’s 16GB of internal storage, out of which around 9.6GB is available to use. Of course, this was a display unit, so the retail units are likely to have more available storage. A 2,600mAh battery provides the fuel. During our brief usage with the A7, the device seemed extremely zippy, but we’ll save our comments on performance for the full review. 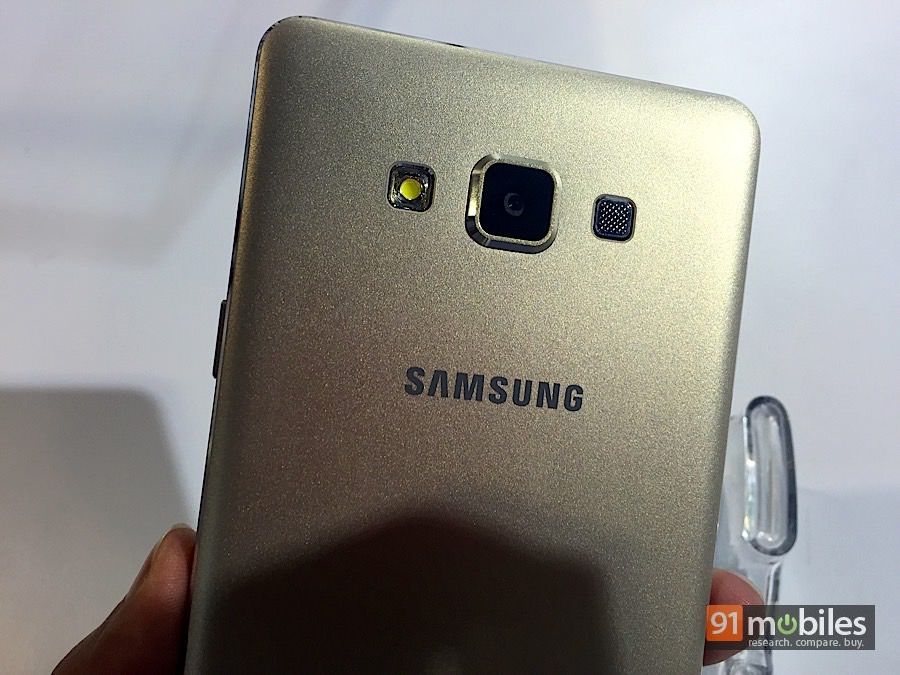 The photography department is taken care of by a 13MP primary camera accompanied by an LED flash, and a 5MP front ‘selfie’ camera. We took a few sample shots from the cameras and were quite impressed with the results, but this could also be the gorgeous display fooling our eyes. The front camera also lets you capture wide-angle shots and GIFs.

The A7 runs Android 4.4.4 KitKat as a base, with Samsung’s TouchWiz UI layered on top. It comes with the whole host of Samsung additons, including Private Mode, Easy Mode and Ultra Power Saving Mode, among others. 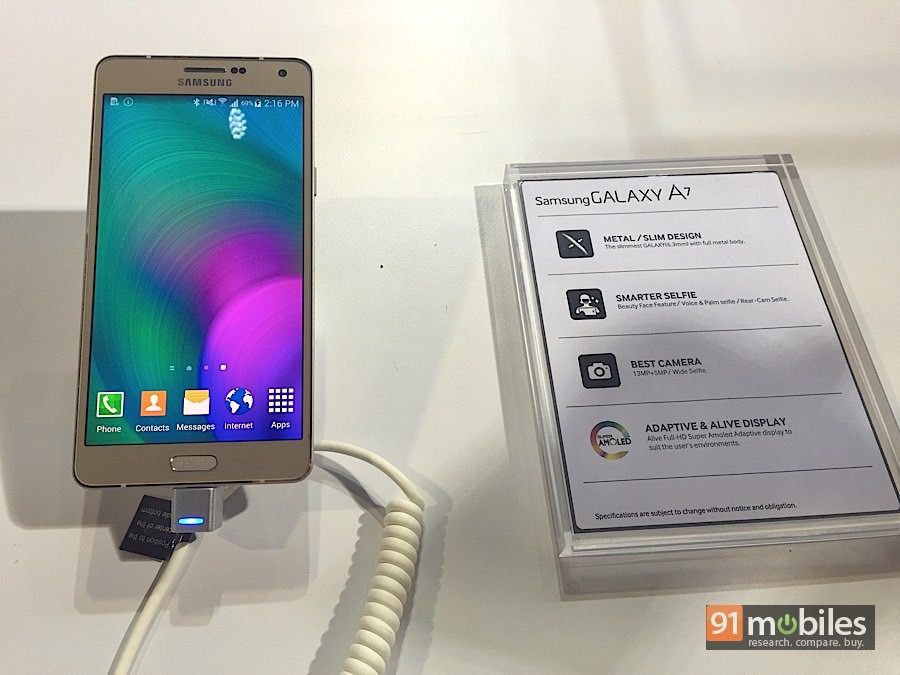 The Galaxy A7 is a pretty loaded device, and will be a serious contender in the Rs 30,000 price range. Its closest competitors are the OPPO R5 (review in pictures) and vivo X5Max (first impressions) which are also in the ultra-thin category, and are powered by the same processor. In terms of core specs though, the Moto X 2nd-gen (review) and Lenovo Vibe Z2 Pro (review) are worthier options. Of course, we’re basing these comparisons based on our first impressions, and for a better understanding of how the Galaxy A7 performs, hold on to your horses for our full review.
ShareTweetShare