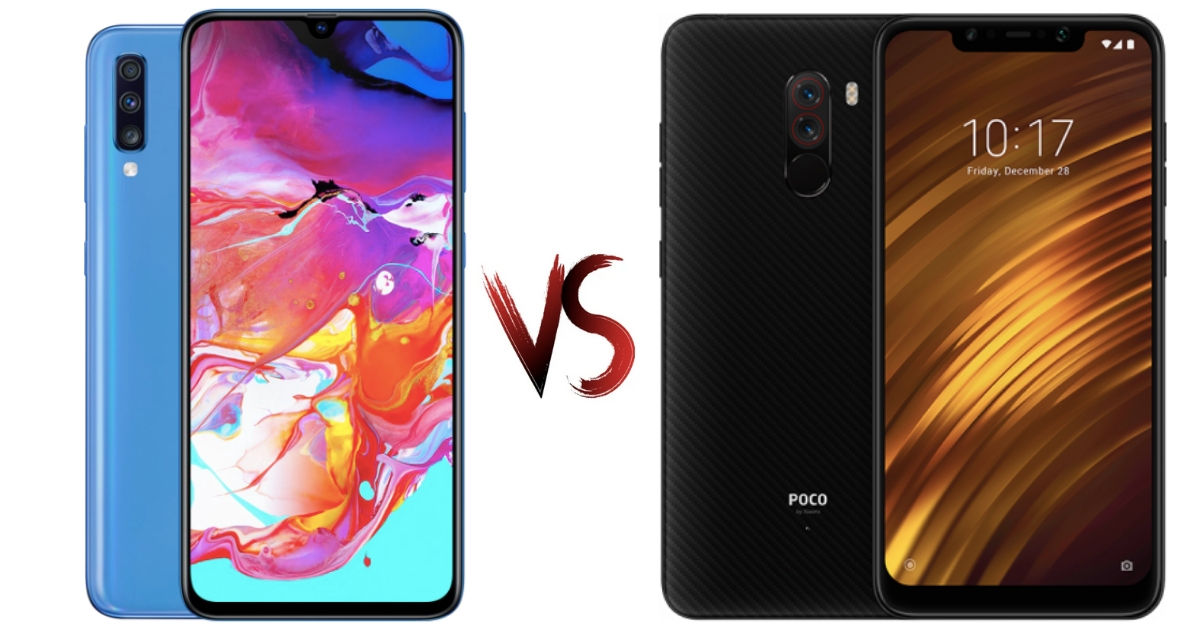 The Samsung Galaxy A70 is the latest mid-range smartphone from the Korean manufacturer. It is packed to the brim with features and is available at a decent price. With the phone now available in India, it poses a threat to several other similarly priced devices. In this post, we are going to look at the differences in specifications between the similarly priced POCO F1 (review) from Xiaomi. We will be comparing the Galaxy A70 with the 256GB Armoured variant of the POCO F1 to find out which of the two is a better deal.

Samsung Galaxy A70 vs POCO F1 price in India

As mentioned earlier, Samsung has priced the Galaxy A70 quite well in India. The phone is available for Rs 28,990 with 6GB RAM and 128GB of storage. That’s the only configuration this phone is available in. As for colours, you can have the phone in either Blue, Black, or White.

Coming to the POCO F1, we are only going to talk about the 256GB variants of this phone. The POCO F1 with 8GB RAM and 256GB of onboard storage is priced at Rs 27,999. There’s also an Armoured Edition in the same configuration, priced at Rs 28,999. Therefore, for the same price as the new Galaxy A70, you can have twice the storage and more RAM if you purchase the POCO F1. Better deal, no?

The new Galaxy A70 is a mid-range smartphone and features a large 6.7-inch Super AMOLED display with FHD+ resolution. It’s got a 20:9 ratio and a tiny notch at the top. The phone also features an in-display fingerprint scanner, the optical kind, underneath the display. Design wise, the phone has a 3D Glasstic design, which has a slight gradient finish. On the other hand, the Xiaomi POCO F1 Armoured Edition has a kevlar body and a 6.18-inch FHD+ display. It also has a notch at the top, one that is wider and packs a 3D Face scanner.

Samsung has used the Snapdragon 675 chipset on the Galaxy A70, which is a good mid-range processor, but is no match for the POCO F1’s Snapdragon 845. This is a flagship class processor and is more powerful than the Snapdragon 675. If you’re looking to game and multi-task a lot, then the POCO F1 will clearly win. Add 8GB RAM and 256GB storage to that, and you’ve got an even more powerful smartphone. The Galaxy A70 maxes out with 6GB RAM and 128GB storage.

Now, let’s talk about the cameras. The Galaxy A70 is probably the superior device here, thanks to its triple-rear camera setup. It features a primary 32-megapixel f/1.7 sensor, a secondary 8-megapixel f/2.2 ultra-wide unit, and a 5-megapixel depth sensor. For selfies, another 32-megapixel sensor is placed inside the notch. In comparison, the POCO F1 features a dual-camera setup at the back, with a 12-megapixel main sensor and a 5-megapixel depth unit. A 20-megapixel sensor is available up front for selfies, which is coupled with an IR scanner for Face recognition. As you can see, the Galaxy A70 offers more on the camera front and will probably attract more users.

Finally, comparing the battery and software, both devices run custom UI’s on top of Android OS. The Galaxy A70 comes with Android 9.0 Pie OS with One UI on top, while the POCO F1 runs MIUI based on Android 9.0 Pie as well. Samsung has included a 4,500mAh battery on the Galaxy A70 with support for 25W fast charging. The POCO F1 also gets a large 4,000mAh cell, but only supports Qualcomm’s Quick Charge 3.0.

If you’re looking for a phone with a large display and battery, but don’t care about performance, then the Galaxy A70 is the answer. As a bonus, you also get a triple-rear camera setup and an in-display fingerprint scanner.