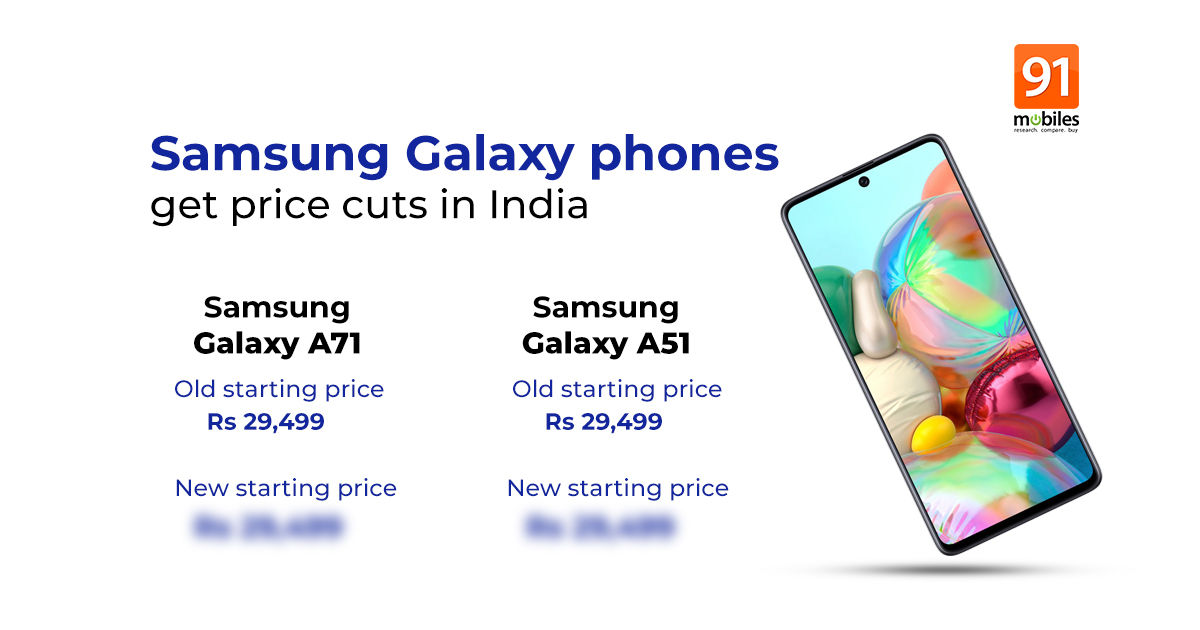 Samsung Galaxy A71 and A51 prices in India have been cut officially by the brand, making two of the popular A-series phones more affordable than ever. Samsung has announced the new Samsung Galaxy A71 and the Galaxy A51 prices in India, saying that both these mid-range smartphones will now be Rs 2,000 cheaper. Those who’ve been on the fence about purchasing these devices, can now save money and get a better deal. The new prices are already live on Amazon India and Samsung’s official store. It should be noted that the Galaxy A71 and Galaxy A51 are, by no means, the latest devices from the company and were both launched in India in December 2019. In fact, their successors are expected to launch in the next few months.

Samsung Galaxy A71 and Galaxy A51 price cut in India

The Samsung Galaxy A71 price in India now starts at Rs 27,499 for the sole 8GB RAM variant. That’s a discount of Rs 2,000 and makes the phone a great deal. Meanwhile, the Galaxy A51 is available in two variants, with the base 6GB RAM version now available for Rs 20,499. If you’d prefer the 8GB RAM version instead, then you’ll end up paying Rs 22,499.

Samsung Galaxy A71 and Galaxy A51 specifications

Both the devices have large screens and quad rear camera setups. The Samsung Galaxy A71 features a 6.7-inch Super AMOLED Plus FHD+ display and is powered by the Snapdragon 730 chipset. It is available with 8GB RAM and 128GB of onboard storage. The phone features a quad rear camera setup with a main 64-megapixel shooter. It gets a 32-megapixel front camera, a 4,500mAh battery with 25W fast charging support, and an in-display fingerprint scanner.

The Galaxy A51 is equipped with a 6.5-inch FHD+ Super AMOLED display and an Exynos 9611 processor. This phone gets two variants with 6Gg/8GB RAM and 128GB storage. It also has a quad-camera setup at the back but uses a 48-megapixel primary sensor. There’s a 4,000mAh battery with 15W fast charging, an under-display fingerprint sensor, and a 32-megapixel selfie camera.