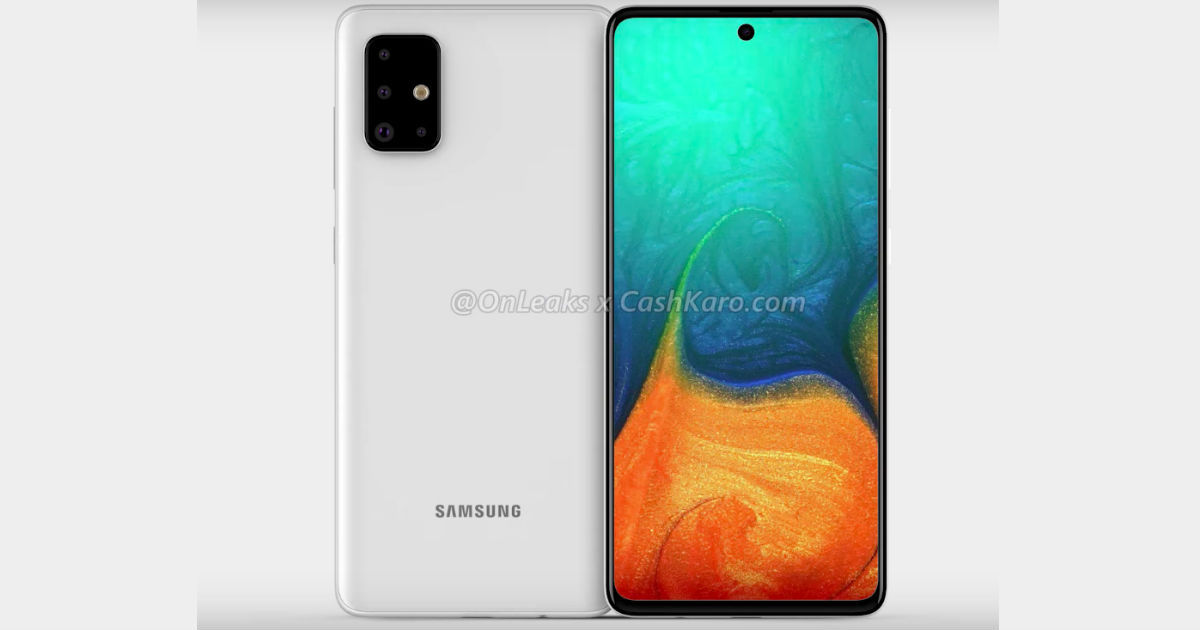 Apart from the upcoming Galaxy A51, Samsung also seems to be working on the Galaxy A71 smartphone. The handset will most likely be the company’s upper mid-range offering next year – succeeding the Galaxy A70 lineup. If you’re wondering what the Galaxy A71 is going look like be, CashKaro – in association with tipster OnLeaks – has released CAD-based renders and a 360-degree video of the handset. The Samsung Galaxy A71 leak reveals that the phone will take its design cues from its sibling, the Galaxy A51.

As per the renders, Samsung Galaxy A71 is tipped to come with a punch-hole display. The cut-out will be centre-aligned atop the screen – just like on the Galaxy Note 10 series. The handset will most likely boast of an impressive screen-to-body ratio, thanks to uniformly thin bezels and chin on the bottom. The Samsung Galaxy A71 will reportedly house a 6.7-inch full-HD+ display and an overall dimension of 163.5 x 76 x 7.9mm — 9.2mm for the camera bump – which is similar to its predecessor Galaxy A70s.

On the other side of the Samsung Galaxy A71 seems to house a L-shaped quad-camera setup along with LED flash in a wide module – which is reminiscent of Galaxy M30s. Moving on to the frame, the handset features the power button and volume rocker on the right and USB Type-C port, speaker grill, and 3.5mm headphone jack are is placed at the bottom edge.

Separately, the Samsung Galaxy A71 has also surfaced on Korean certification agency, which spills the beans on its beefy 4,500mAh battery. The handset will reportedly be powered by a dated Qualcomm Snapdragon 675 chipset and feature a 48-megapixel quad-rear camera setup (instead of 64-megapixel Samsung GW1 sensor). This will be aided by a 12-megapixel wide-angle sensor, 12-megapixel telephoto sensor, and a 3D TOF sensor. The front camera of the phone will reportedly feature a 32-megapixel shooter for selfies and video calling. Software-wise, the handset will most likely boot Android 10-based One UI custom skin out of the box.