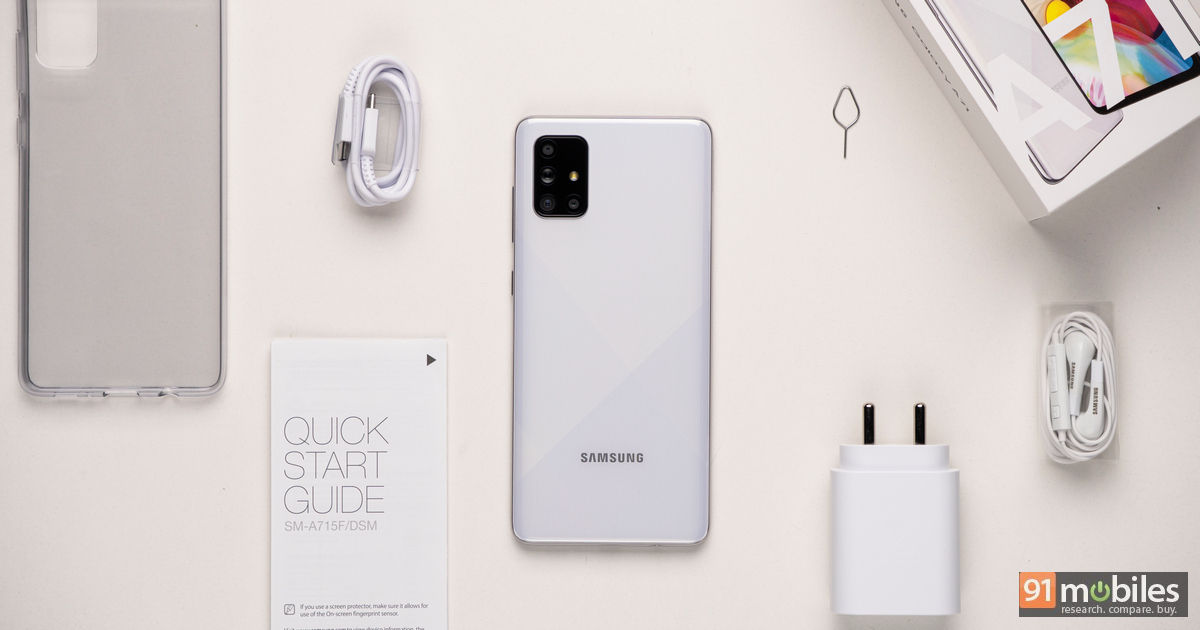 “The Galaxy A71 is knocking on the affordable flagship door but is it worthy enough to enter it?“

Samsung is continuing with its spree of launching one phone after the other to keep up with the increasingly competitive Chinese rivals. While the main attention was focused this month on the Galaxy S20 series and the Galaxy Z Flip, Samsung’s budget/mid-range focused Galaxy A-series went slightly under the radar. We have already reviewed the Galaxy A51 (review), which was announced at the end of last month and now we have the Galaxy A71. At a price of Rs 29,999 the Galaxy A71 is creeping up in the affordable flagship territory. I played around with the device for a while and here are my first impressions of the Galaxy A71. 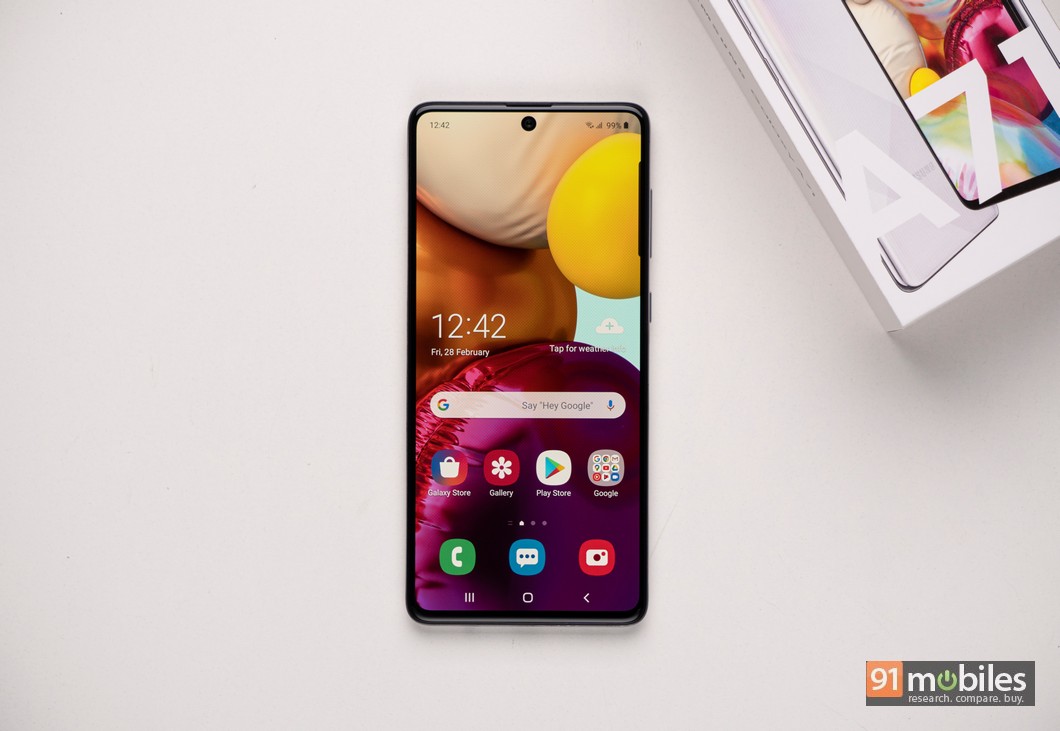 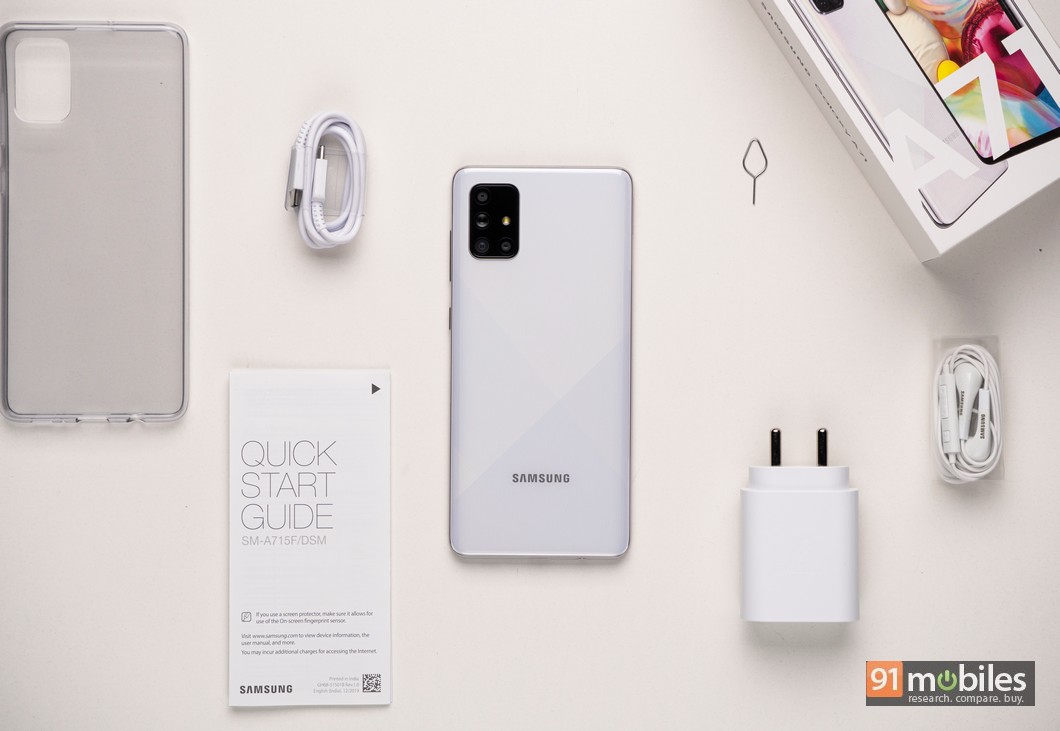 Once the unboxing was over, I had my first look at the gigantic phone. Housing a 6.7-inch screen, this is perhaps the biggest non-folding Galaxy smartphone I’ve held in my hands except for the Note 10 Plus (review). Samsung has gone again with the same Infinity O display that we have seen on the Galaxy A51, which is basically a punch hole for the front camera on the top-centre of the screen. One could also easily mistake the A71 for the Galaxy Note 10 Lite (review) or even the S20 Plus, all of whom are large rectangular slabs with a circular cutout for the selfie camera. The A71 has a 6.7-inch Super AMOLED display making it the biggest A-series phone to date. 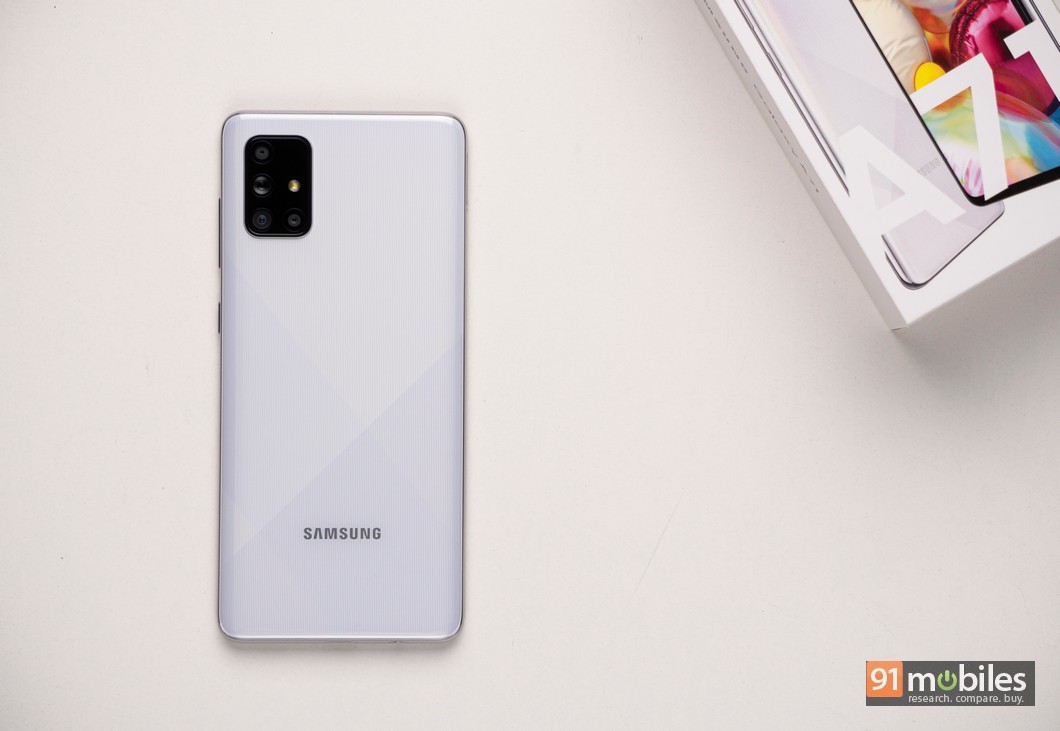 The back of the Galaxy A71 has an L-shaped camera housing inside a rectangular module, again reminiscent of the Galaxy A51. I’ve received the Prism Crush Silver variant for review purposes and it is a stunning colour. A subtle gradient prism gradient is also visible when looked at from different angles. The phone has a ‘glasstic’ finish making it less prone to fingerprints and slipping out of my hand. 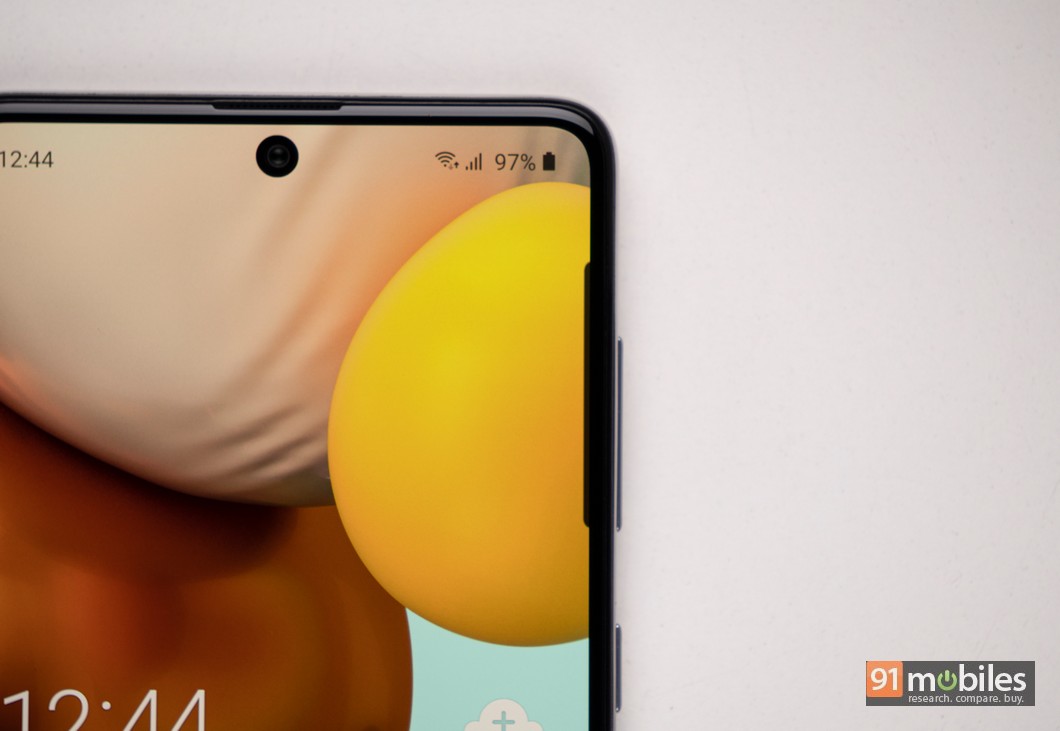 Here are some sample shots.

The last three sensors are the same that we see in the Galaxy A51. During my short time with the phone, I could see that daytime photography was quite good although I did spot instances of over smoothening of details. More on that in my full review. 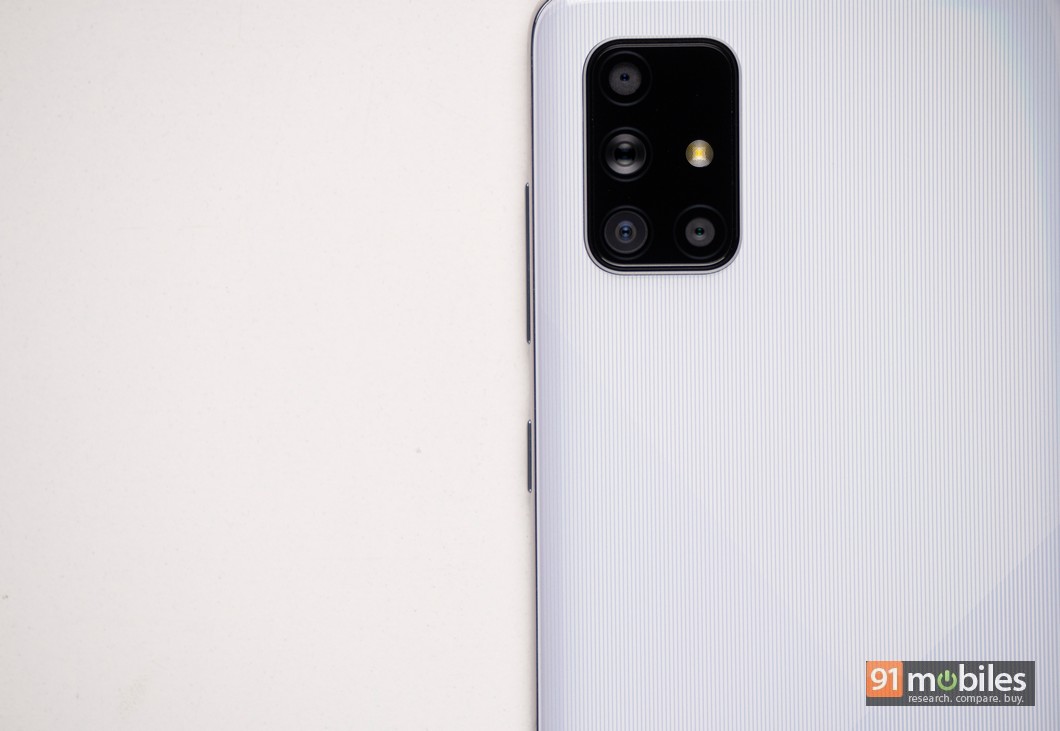 Performance could be something of an issue considering the way this device is priced. We get the Snapdragon 730 chipset with the 8GB RAM + 128GB storage option being the only variant. My full review will put the phone through its paces to better understand its processing output. The Galaxy A71 is also one of the few phones to still have a 3.5mm headphone jack. As for the software, the Galaxy A71 runs the Android 10-based OneUI 2.0 platform which I have already expressed my interest in when reviewing the Galaxy A51.  As for the battery, the Galaxy A71 boasts a 4,500 mAh battery with a 25W charger provided inside the box. 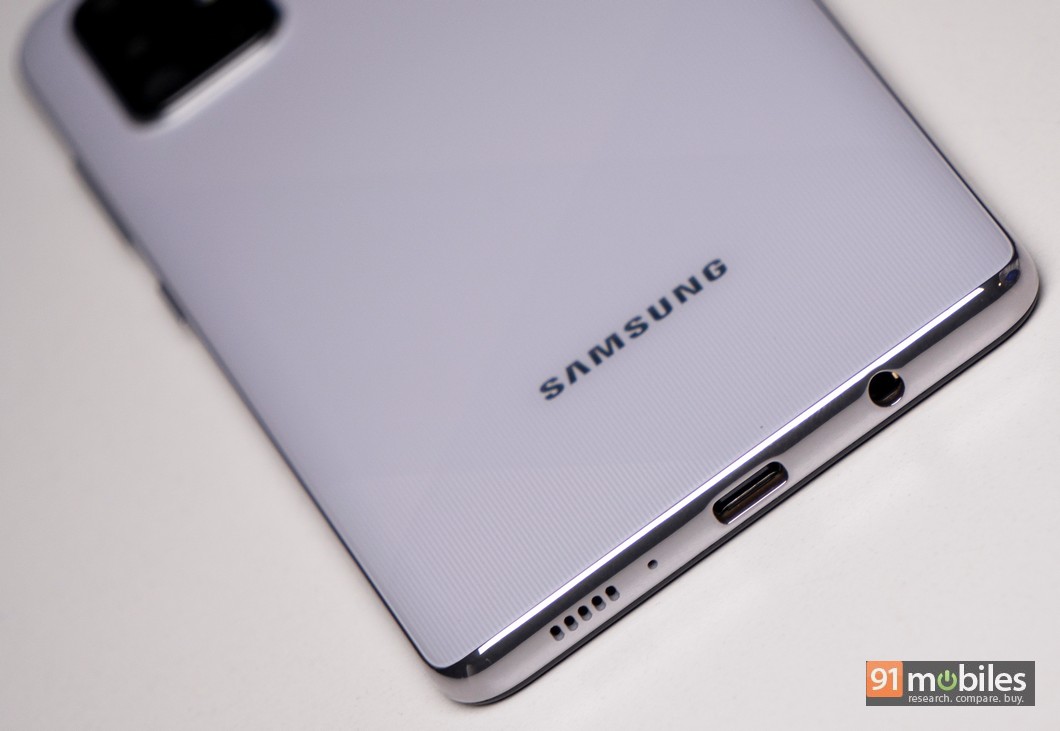 With the Galaxy A71, the main competition of the device will quite likely be the Realme X2 Pro (review) which is a spec beast. From the looks of it, the Galaxy A71 has its world-class display and its camera to bank on. I’ll let you know how that goes when I review the device in full, so stay tuned for that.