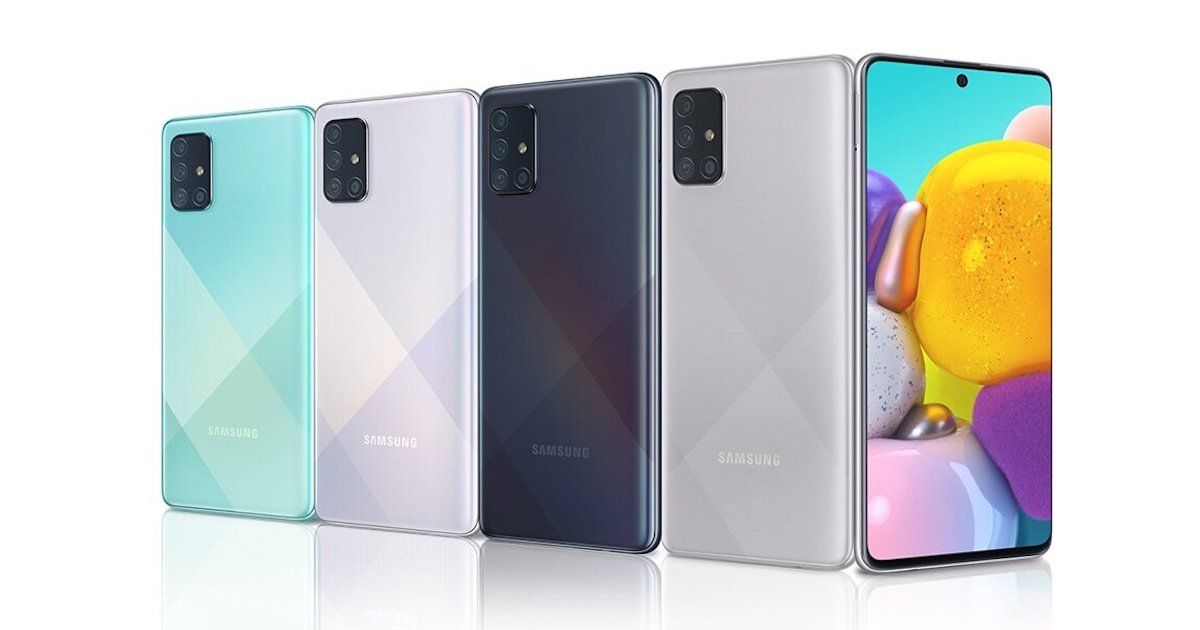 The launch of the Samsung Galaxy A71 really stirred up the mid-range smartphone market earlier this year as it offered amazing features at an unbeatable price. It remains an outstanding smartphone even now thanks to its huge Super AMOLED Plus display, powerful performance, long-lasting battery, and fantastic 64MP quad camera. No wonder then that it has become the benchmark for premium mid-range smartphones of 2020 in the Indian market. Vivo recently launched the X50 smartphone in this segment as a contender against the Galaxy A71. That’s why we decided to put the Galaxy A71 and the Vivo X50 through a thorough comparison to let you know which one comes out on top. By the end of this comparison, you’ll be able to clearly see which device is the real winner. Let’s get going then. 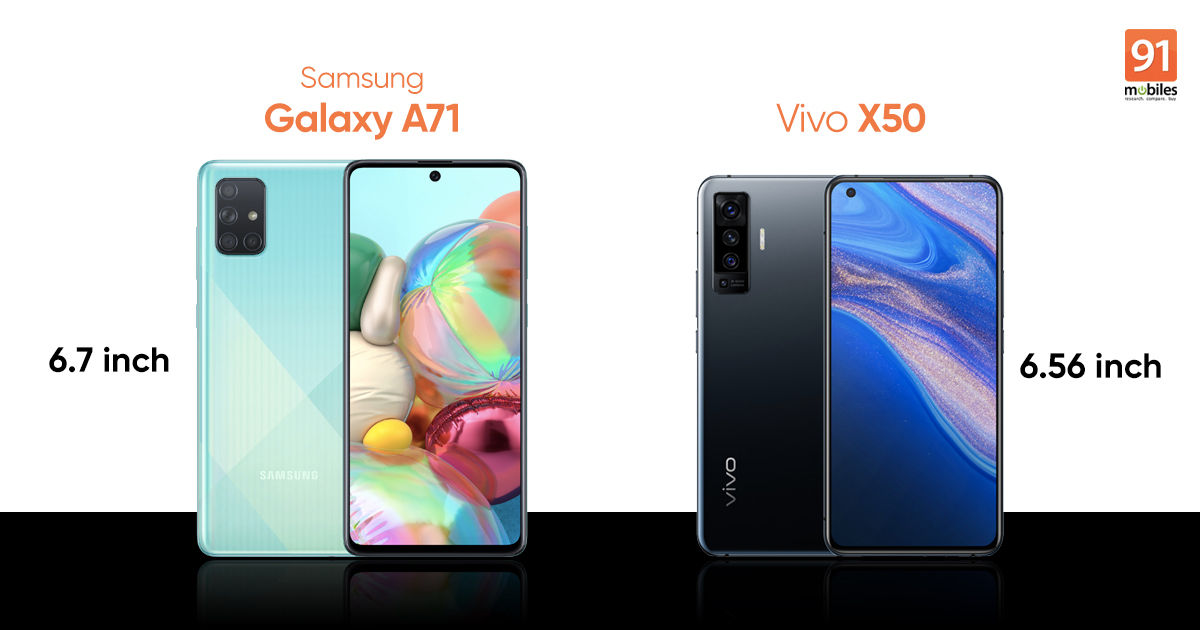 Both the phones have glossy rear surfaces and full-screen front panels with punch-hole design to house the front cameras. The display on the Samsung Galaxy A71 is a 6.7-inch Super AMOLED Plus Infinity-O panel that guarantees great contrast levels thanks to the dark blacks that it’s able to deliver. As for the Vivo X50, it has an AMOLED panel that’s smaller in size, at 6.5 inches. The Vivo device does have a 90Hz refresh rate, but since most apps and games are yet to get updated to support such panels, you’ll only mostly experience the difference while scrolling through apps and content. Furthermore, the higher refresh rate of Vivo X50 will drain battery faster as the CPU has to refresh the display more times compared to Galaxy A71.

In terms of other design traits , both the phones offer similar features, but the Galaxy A71 definitely looks much better thanks to the rhythmical pattern on the back and the attractive Prism Crush, Black, Blue, and the new Haze Crush Silver options. Moreover, it has a big advantage over the Vivo handset thanks to the 3.5mm audio jack, which is missing from the rival device. The 7.7mm-thick frame makes the Galaxy A71 among the slimmest devices in this price range, which is a feat hard to match considering the big battery it packs! 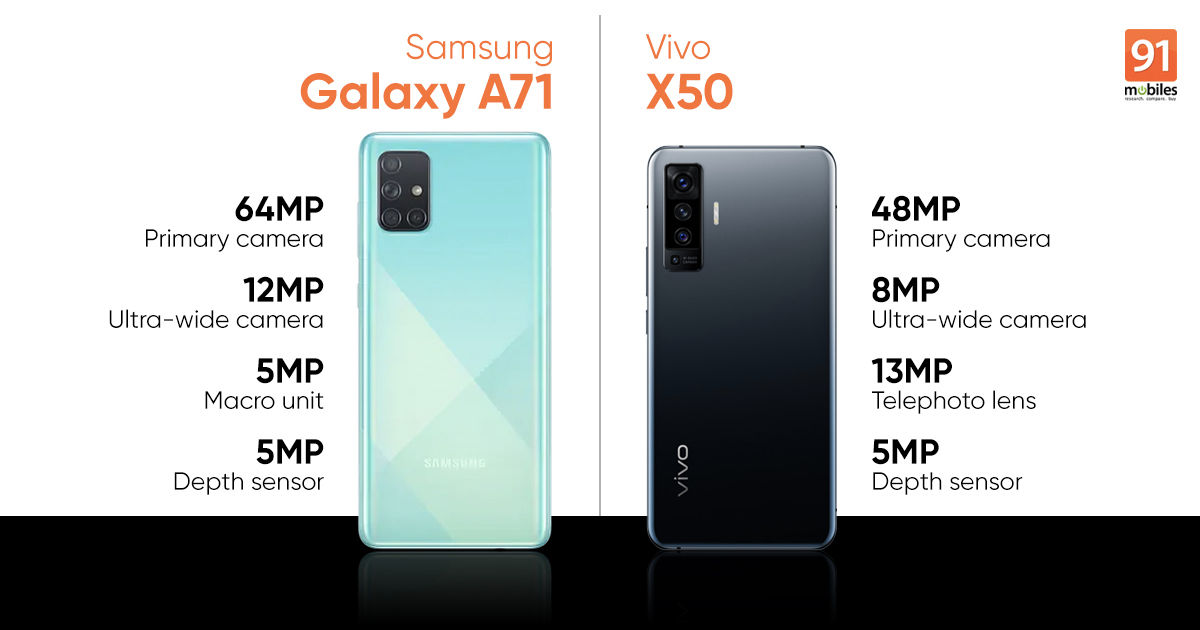 Both these devices support quad camera, but here too the Samsung phone is at an advantage owing to its 64MP main camera. In comparison to the high-resolution sensor of the Galaxy A71, the main camera onboard the X50 is a 48MP unit. As for the ultra-wide camera, the Samsung model also has a higher resolution 12MP sensor with a wide 123-degree field of view, as opposed to the Vivo phone’s 8MP sensor with a relatively narrower 120-degree field of view. Both the phones offer 5MP macro cameras and therefore, the handsets should let buyers get up close and personal with their subjects too. The Galaxy A71 also features a dedicated 5MP depth camera for portrait images, which the X50 lacks since it doesn’t feature this lens. Instead, the Vivo smartphone opts for a 13MP zoom lens, which the Samsung smartphone handles well through software wizardry.

When it comes to the front camera, it may seem like there’s a tie as both the smartphones sport a 32MP selfie camera. However, the f/2.2 aperture of the Samsung phone gives it a notable edge while capturing selfies in low-light scenarios compared to the Vivo device, which has a much smaller f/2.45 aperture. Moreover, the Slo-mo Selfie feature of the Galaxy A71 puts it in a league of its own as the feature lets you shoot slow-motion selfie videos that will make your Instagram profile shine.

While all that’s well and dandy, the Samsung Galaxy A71 also offers better camera features and the phone is laden to the brim with utilities usually seen on flagship phones. Case in point, the phone’s Single Take feature which captures a mix of photos and short videos with the tap of a button. The smartphone can also shoot stunning hyperlapses at night, thanks to the Night Hyperlapse feature and it even offers Custom Filters to make an image even more aesthetically pleasing without subjecting users to a third-party editing software.

But that’s not all. The Samsung Galaxy A71 also comes with a Smart Angle Selfie feature that will automatically switch the frame to a wide-angle mode when it detects more than one face in selfie mode. Talk about the AI being put to good use! On the other hand, the Vivo X50 doesn’t come close to offering such features and correspondingly, the Galaxy A71 trumps its rival in terms of camera performance. 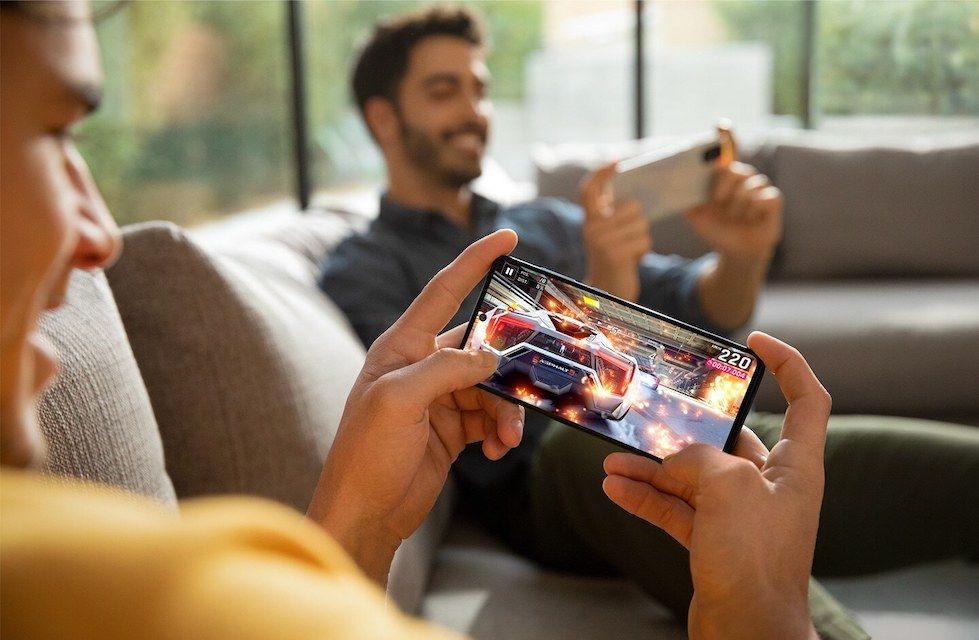 The 8nm Snapdragon 730 chipset powers both these smartphones, giving them ample power to deliver ultra-fast performance. A 2.2GHz octa-core processor provides the smartphones with the fuel needed to handle heavy operations, while graphics are taken care of by the Adreno 618 GPU. With 8GB of RAM also common for both the handsets, you can expect similar performance from the two. All in all, the two smartphones are pretty evenly matched when it comes to performance.

Storage is another area where the Samsung smartphone soundly scores a win. You get 128GB of base storage with the Samsung Galaxy A71, while the Vivo X50 offers you the choice of either 128GB or 256GB of onboard storage. But this is more than nullified by the fact that the Galaxy A71 offers a microSD card slot with support for an additional 512GB of storage space. That means you have more than enough storage for hundreds of movies and thousands of songs.

That’s not all though. The Galaxy A71 gets an upper hand due to the numerous software features Samsung has loaded it with to improve your user experience. These include Samsung Pay for contact-less payment at just about any retail point of sale machine, Quick Switch to keep all your messages, photos, etc. private, and Knox to secure the data on your phone, and so much more.

On the battery front, the Samsung phone packs a large 4,500mAh battery inside, with support for fast-charging at 25W speed. As for the X50, it holds a relatively smaller 4,200mAh unit that can charge at speeds of up to 33W. However, it’s better to have a battery that lasts longer than a battery that charges faster since your phone will spend lesser time plugged to the wall that way.

Samsung Galaxy A71 is the clear winner in this comparison. Its gorgeous display, versatile cameras, and powerful performance make it a device perfect for anyone looking for a great mid-range smartphone. It’s way more affordable than the Vivo X50 too! While the X50’s price starts at a whopping Rs 34,990, the Samsung Galaxy A71 can be purchased at just Rs 29,499. All this, coupled with the lower price and attractive EMI options, can mean only one thing – the Samsung Galaxy A71 is a sure shot winner in this comparison. So, log on to Samsung.com today and order the best premium mid-range smartphone Galaxy A71 to celebrate this festive season!