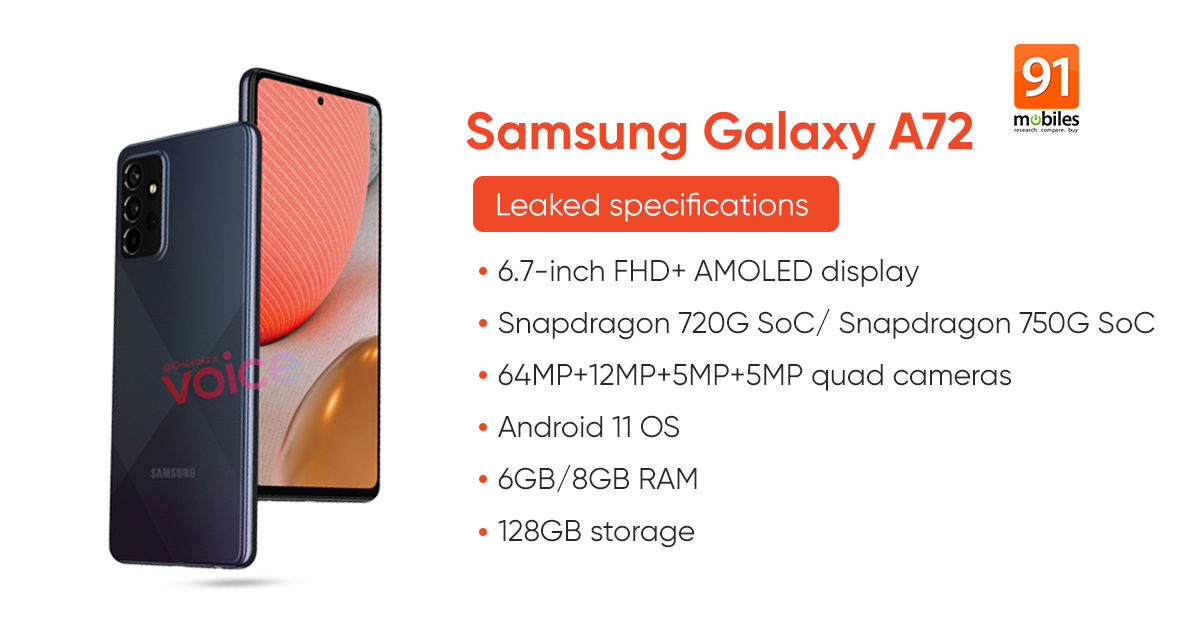 Samsung Galaxy A72 launch could be soon as the phone has been all over the news in recent times. A recently leaked render has shown off the entire front-design, including the punch-hole cutout and slim bezels. Now, the Galaxy A72 support page has gone live on Samsung’s Caribbean and Latin America websites with the model number SM-A725M. While this doesn’t reveal much about the phone’s hardware, it serves as a good indication the Galaxy A72 launch could be around the corner. Speculations are rife the South Korean giant may bring both 5G and 4G variants of the device, depending on the market and network availability.

The Samsung Galaxy A72 design looks similar to a lot of other mid-range phones from the brand. The smartphone will come with a centre-positioned punch-hole cutout for the selfie camera and slim bezels around the screen. The phone is expected to get a rectangular camera module at the back, which will quad cameras and an LED flash. The volume rocker and power button are on the right spine. The speaker grill, microphone, and USB Type-C port are at the bottom. The phone should be available in at least Blue colour.

As for the Samsung Galaxy A72 specifications, it is said to sport a 6.7-inch FHD+ display, which probably could be an AMOLED panel. The 4G variant is said to come with the Qualcomm Snapdragon 720G SoC, while the 5G model could come with the latest Snapdragon 750G SoC paired with at least 6GB/8GB RAM and 128GB storage option. It is likely to boot Android 11 OS with OneUI 3.0 custom skin on top. Moving to optics, the Samsung Galaxy A72 has a 64MP main camera, a 12MP ultrawide lens, a 5MP macro lens, and a 5MP depth sensor. While details regarding the front-camera and battery are a mystery at the moment, we can expect to learn those details quite soon. Stick around.