Samsung is among the most sought after smartphone brands in India, and for good reason. The company has several balls in the air and between the affordable M-series, the premium A-series and the flagship S and Z range of smartphones, the brand launches more phones than one can count on both hands every year. Unsurprisingly, the company has amassed a loyal fan base in India and the brand hopes to sway even more users to its doorsteps with the all-new Samsung Galaxy A73 5G, which offers an impressive camera stack, among other things. I managed to get my hands on a unit and here’s what I make of it.

The Samsung Galaxy A73 5G is a fairly well-rounded phone. Provided you can look past the handset’s gaming chops, the device will not disappoint you.

There is no mistaking the Galaxy A73 5G for anything but a Samsung phone. The company has stuck with the “if it ain’t broke” philosophy and as a result, has stylised the smartphone in a similar fashion as its predecessor(s). Correspondingly, the Galaxy A73 5G also utilises a polycarbonate build which, during my stint with the phone, felt fairly robust and sturdy. And, although the design doesn’t feel as luxurious as competing glass-back devices like the iQOO 9 (review) or the OnePlus 9RT (review), the Galaxy A73 5G cuts a handsome package nonetheless. 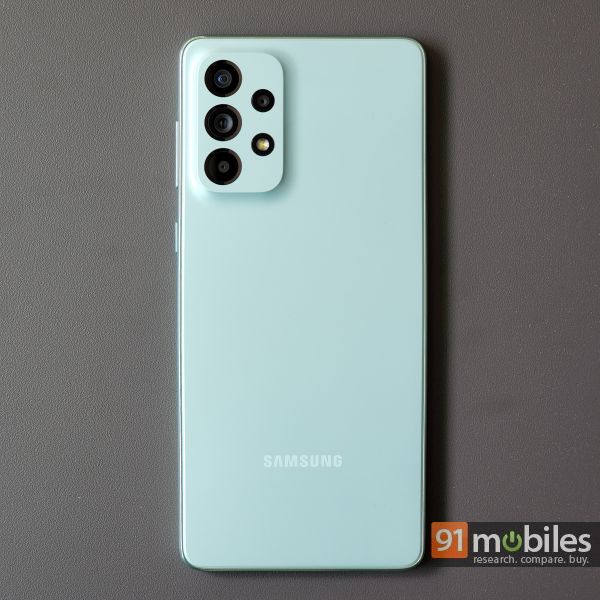 To wit, the device is available in a slew of eye-catchy colours, including a pastel mint hue that looks riveting, to say the least. The brand has also revamped the camera module to make the Galaxy A73 5G stand out from other A-series phones. In fact, you’ll notice that, unlike the Galaxy A72’s camera array, the one on the Galaxy A73 5G sits more elegantly on the phone’s back. Add to that the handset’s colour-matched frame and the Galaxy A73 5G will undoubtedly get its fair share of compliments every time you take it out of your pocket. 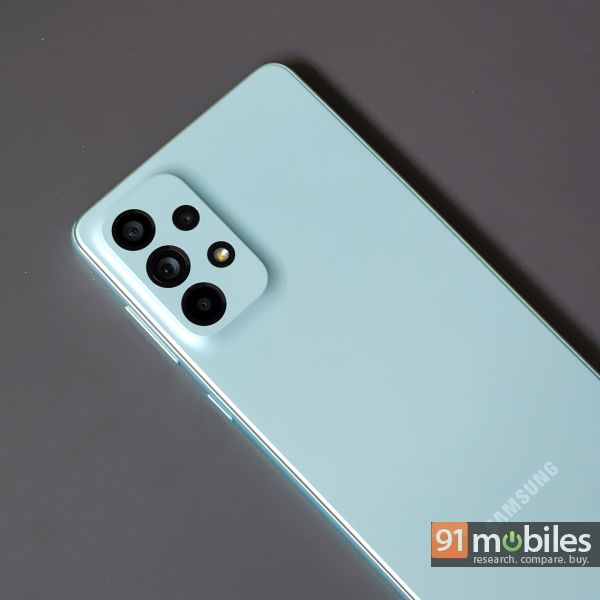 I should add that the Samsung Galaxy A73 5G ships with IP67 certification, which is somewhat of a rarity on phones priced under Rs 50K. Furthermore, the handset’s display is layered with Corning’s Gorilla Glass 5 too, which should keep scratches and scuffs at bay. And, while the phone towers over most devices in its price segment, the handset is reasonably sleek and lightweight at 181 grams. So much so, that I could comfortably use the device with just one hand after spending some time with it. Moving on, the phone ships with a speedy in-display fingerprint sensor, which works in tandem with the smartphone’s convenient albeit a tad finicky facial recognition tech. 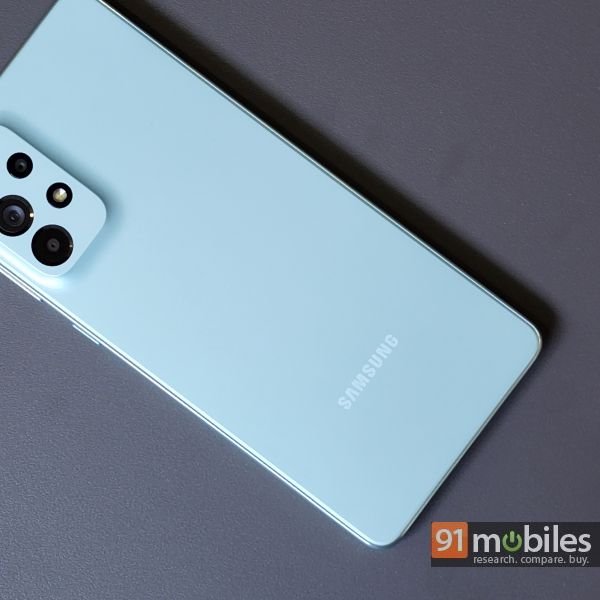 Unfortunately, the smartphone conforms to the norms and omits the headphone jack too. That said, the device does get a dual speaker setup, which gets plenty loud and offers ample stereo separation, thereby paving the way for a joyous media consumption experience. On the flip side, the unit’s haptics feels quite mushy and I didn’t enjoy typing on the phone all that much. 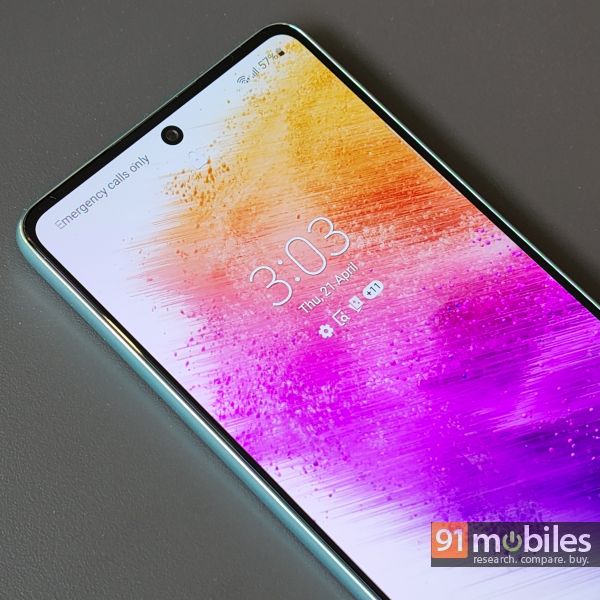 Thankfully, the smartphone ships with a gorgeous screen that will greatly elevate your movie-watching experience. Spec-wise, the panel measures in at 6.7-inches, offers FHD+ resolution and is backed by Super AMOLED Plus technology. The display is of the flat variety too, so you won’t have to contend with colour distortion or accidental touches either. The icing on the cake is that the device offers a snappy refresh rate of 120Hz, meaning the phone doesn’t just render in-app animations smoothly, but it can also make the most of games like Alto’s Odyssey, which run at 120FPS. 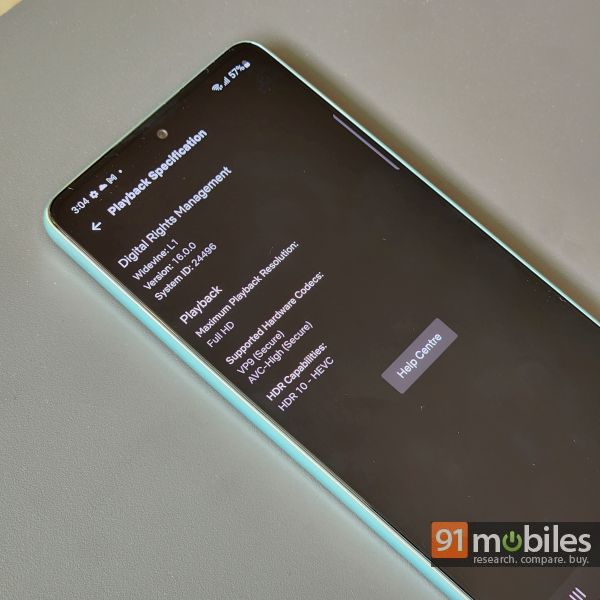 That’s not all, as the panel gets plenty bright at 800 nits too, and you can even stream HDR content on the phone via OTT services like Netflix. All said and done, buyers eyeing the Samsung Galaxy A73 5G will not be disappointed with the phone’s screen.

Coming to the meat of the matter, the Samsung Galaxy A73 5G is backed by Qualcomm’s Snapdragon 778G processor which works alongside LPDDR4x RAM and UFS 2.2 storage. Now, before you get your pitchforks out, allow me to clear the air around the smartphone’s performance chops. You see, the Samsung Galaxy A73 5G is not as snappy as competing SD888/888+ backed devices. Be that as it may, the smartphone is still a solid performer and you’ll only immediately benefit from an 8-series chip in the gaming department. To wit, the Samsung Galaxy A73 5G can run BGMI at HDR graphics and Ultra FPS preset, or Smooth graphics and Extreme FPS setting. On the flip side, the OnePlus 9RT, as well as the iQOO 9 — which cost the same albeit ship with Qualcomm’s Snapdragon 888 and 888+ processors respectively — can relay the game at 60FPS with the graphics set to the HDR preset. 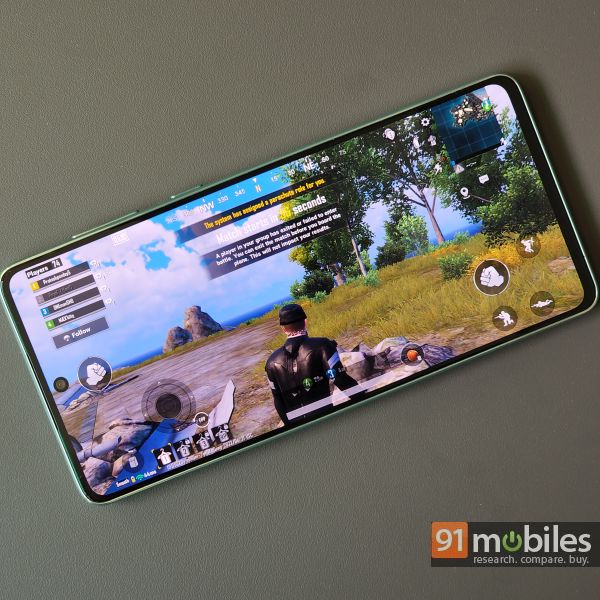 The scenery remains unchanged in other graphically-demanding titles like CoD Mobile and Genshin Impact too. Understandably, hardcore gamers might eschew Samsung’s latest, but that doesn’t take anything away from the fact that the device is a capable daily driver. In fact, I didn’t run into any major performance issues during my stint with the phone – apps opened swiftly, the handset could juggle between a handful of utilities simultaneously and there were no noticeable frame drops even after playing resource-hungry games like BGMI for around 45 minutes on the set. Clearly, the smartphone tackles sustained workloads admirably, which is further substantiated by the unit’s CPU throttling score wherein, the Galaxy A73 5G throttled to just 92 percent of its peak performance, which is mindboggling, to say the least. Unsurprisingly, the handset’s efficient processor contributes to the Galaxy A73 5G’s battery life too. In fact, I was able to get a full day’s use out of the phone and that’s with the display set to 120Hz. Now, you might drain the handset’s 5,000mAh quicker if you play a lot of games but, for the most part, most folks won’t get any battery anxiety with the A73 5G in their pockets. 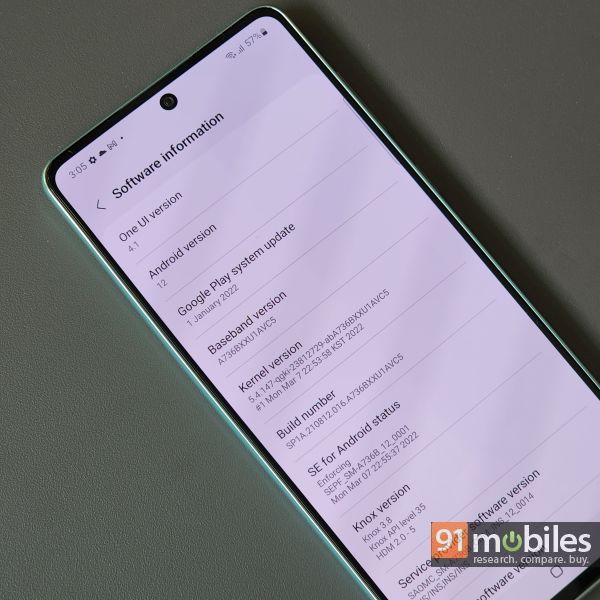 As for software, the device boots Android 12 with a skin of OneUI v4.1 layered on top. The interface is chockablock with interesting features and utilities, including a dedicated theme store, support for oodles of screen on and off gestures, a secure folder to keep your personal data away from prying eyes and much more. That said, I am not the biggest fan of the bloatware and duplicate apps that come bundled with most Samsung phones. On the bright side, most of the third-party apps can be uninstalled from the set, and the device will be eligible for four years of OS upgrades as well, which is great. 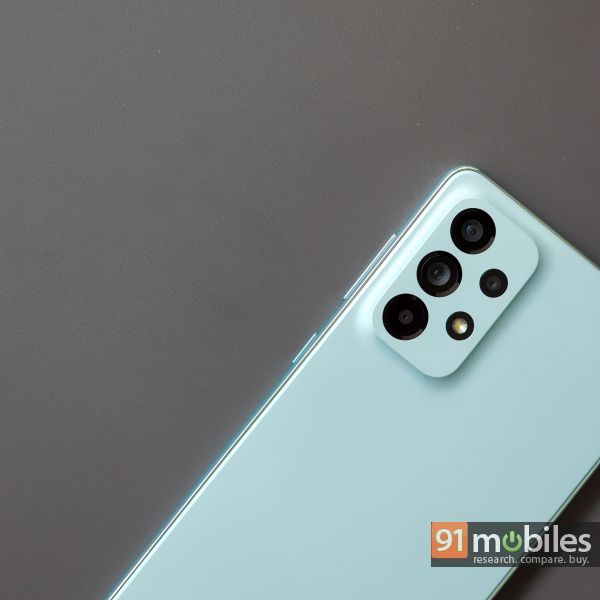 Samsung has pulled out all stops for the Galaxy A73 5G in the camera department. In fact, the smartphone is the first Galaxy A-series phone to ship with a 108MP primary camera. The auxiliary sensors include a 12MP ultrawide angle shooter, a 5MP depth camera, a 5MP macro camera and a 32MP selfie camera. I should also point out that the device supports OIS as well, meaning you should be able to shoot buttery-smooth videos via the A73 5G’s main sensor. 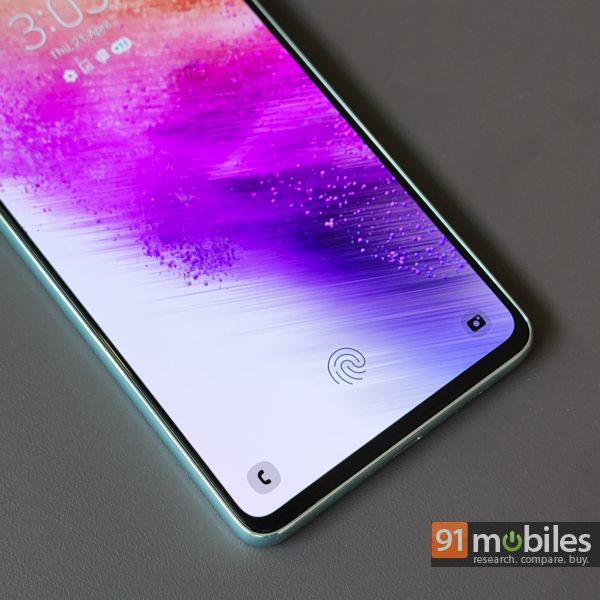 Clearly, the handset’s camera spec sheet reads like a dream, so are the sensors actually any good? Well, let’s start with photos snapped by the phone’s primary sensor. Now, much like most Samsung phones, the Galaxy A73 5G can wow you with stunning stills, especially during the day. In fact, shots clicked in a well-lit environment exhibited excellent details around the centre of the frame. The dynamic range in the stills was to my liking too, and the device didn’t crush the shadows in the darker bits of the composition either, which is great. That said, the corner sharpness of the objects in the frame does leave something to be desired. In fact, if you look at the shot of the backside of my apartment complex, then you’ll notice that the leaves on either side of the frame appear quite soft. What’s more, the colours appear a tad doctored too and it’s evident that the phone is jazzing up the hues to output an Instagram-ready snap. The handset’s ultrawide angle sensor, on the other hand, clicked excellent photos with a wide field of view. Now, it’s quite common for a phone’s assisting sensor to introduce noise in the frame, even during the day. While the Galaxy A73 5G is no exception to the rule, I am glad the device kept grainy-ness in the stills in check. And, you should know that the sensor reciprocates colours more authentically too. Moving on, the smartphone’s macro sensor can snap fantastic closeups with excellent details as well, however, I’d advise buyers with a knack for photomicrography to check out devices with a MicroLens too, as they allow users to edge much closer to the subject. 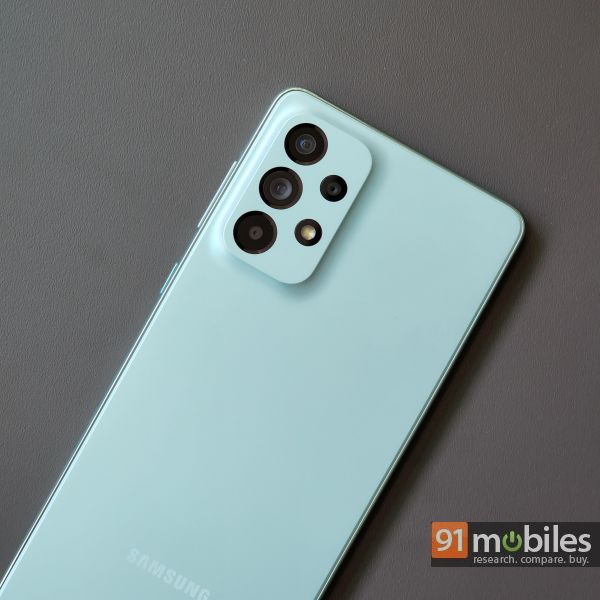 The Samsung Galaxy A73 5G doesn’t disappoint in the selfie department either. For one, the device can squeeze out a ton of information, thanks to its 32MP sensor. Furthermore, you can disable all the beautification and skin-softening features to snap a realistic photo too. Now, do note that the subject’s skin tone sways in favour of slightly warmer tones but the snaps are replete with excellent facial details. The scenery remains unchanged when clicking portrait selfies with the device too and be it the bokeh effect around a subject’s face, or the overall sharpness of the composition, you will find plenty to like about the photos snapped from the Galaxy A73 5G’s front camera.

Finally, let’s talk about the lowlight snaps shot from the phone. Now, much like most other devices, the Samsung Galaxy A73 5G also ships with a dedicated night mode that can bring out a tad more detail in any given shot. That said, I noticed that the sensor struggled with highlight clipping from bright sources of light, like a street lamp. On the other hand, the photos had minimal noise in the frame, and the images were reasonably sharp too.

The Samsung Galaxy A73 5G starts at Rs 41,999 and for the price, gets more than a few things right. For one, the device is among the rare breed of Android phones priced under Rs 50K to ship with an IP rating. Furthermore, the device looks good too and is relatively lightweight as well. More importantly, the handset ships with a capable processor that can not just tackle everyday tasks without breaking a sweat, but can also run games at respectable graphics settings. 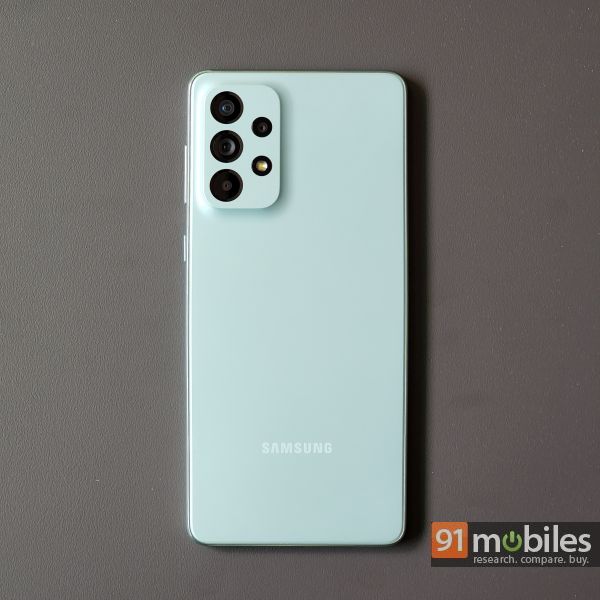 That’s not to say that the phone is perfect. In fact, you can get a significantly faster Android with a premium design for the same price or less. Furthermore, unlike the competition, the Samsung Galaxy A73 5G doesn’t ship with a fast wired charger in the box and the handset’s wired charging speeds pale in comparison to the competition as well. Be that as it may, the device offers a capable camera stack and what is quite possibly, the most refined custom skin on any Android phone at the moment. Add to that the phone’s longevous software update road map and the Galaxy A73 5G will not disappoint you, provided you keep your gaming expectations in check.