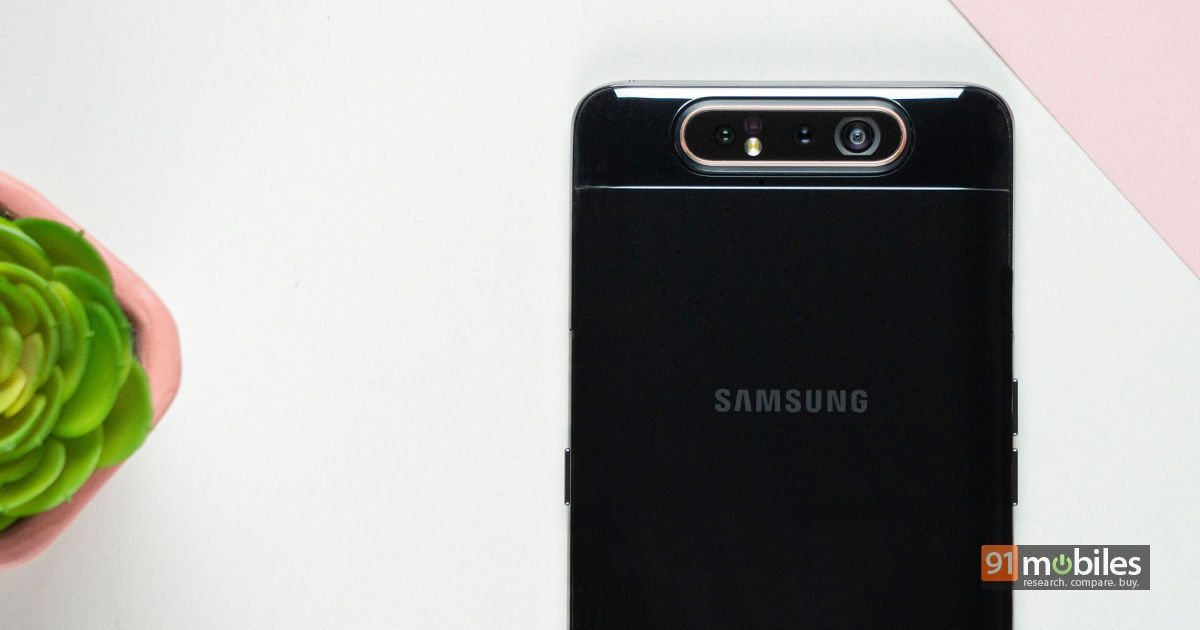 “The Samsung Galaxy A80 camera module slides up from the back and rotates, allowing users to click selfies and make video calls”

Samsung Galaxy A80 (Review) was launched in India back in July at Rs 47,990. It is the world’s first smartphone to feature a rotating triple camera setup with a 48MP primary sensor. Now, three months after its launch, Samsung Galaxy A80 has received a permanent price cut of Rs 8,000, bringing down its current price to Rs 39,990. The new price tag can already be seen on Amazon and our retail sources have confirmed that it is applicable on offline channels too. However, the Samsung online store is not reflecting this price change just yet. The Samsung Galaxy A80’s camera module slides up from the back and rotates, allowing users to click selfies and make video calls. This offers an entirely bezel-less design doing away the notches.

Samsung Galaxy A80 flaunts a big 6.7-inch full-HD+ Super AMOLED Infinity display with an in-display fingerprint sensor for security. The handset is powered by the Qualcomm’s gaming-focused Snapdragon 730G 8nm octa-core processor with Adreno 618 GPU. It packs 8GB RAM and 128GB onboard storage, which is user expandable using a microSD card. The phone dons a 3D glass atop the metal frame on the rear and runs on Android 9.0 Pie with One UI custom skin on top.

In terms of optics, the Galaxy A80 features horizontally-aligned triple rear cameras up top consisting of a 48-megapixel (f/2.0) primary sensor, an 8-megapixel ultra-wide f/2.2 secondary lens, and a 3D ToF third sensor for depth-of-field. The rear camera module also doubles up as the selfie cameras too. The Galaxy A80 is fuelled by a 3,700mAh battery with 25W Super Fast charging support. In terms of connectivity, the phone gets Wi-Fi, 4G LTE, Bluetooth, and USB Type-C support.