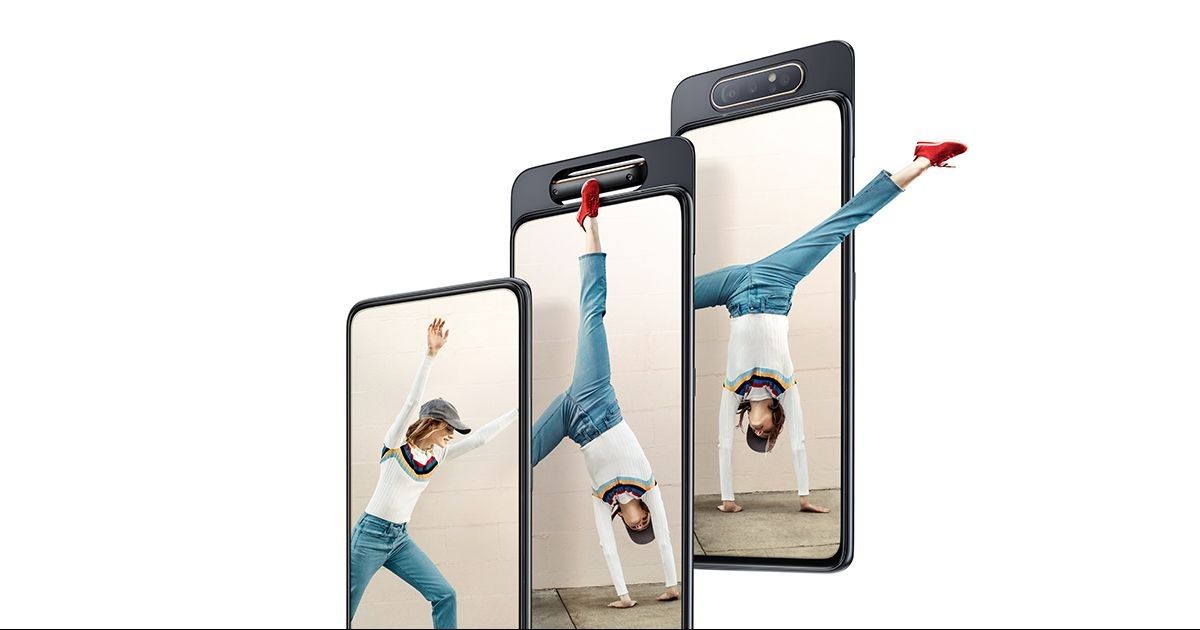 “The Galaxy A80 smartphone is the first ever Samsung device with a truly bezel-less display, with no notch or punch-hole”

The Samsung Galaxy A80 smartphone is finally official with the company taking the wraps off the handset at its event in Thailand. The major highlights of the Galaxy A80 handset are the rear-facing cameras that slide up and swivel for clicking selfies, a truly bezel-less display with no notch or punch-hole whatsoever, and Qualcomm’s latest mid-range chipset. While the Samsung Galaxy A80 price has not been officially announced, the company did reveal it will go on sale on May 29th. The smartphone was launched alongside the Galaxy A70 and Galaxy A40 smartphones, which have previously been made official for the global markets.

Coming to the specifications, the Galaxy A80 boasts of a 6.7-inch Full-HD+ Super AMOLED Infinity display and in-display fingerprint sensor. The handset is driven by Qualcomm’s gaming-focused Snapdragon 730G octa-core chipset, which is forged using 8nm process. The SoC is mated with Adreno 618 GPU, 8GB of RAM, and 128GB onboard storage, which is user expandable using a microSD card.

The phone dons a 3D glass atop the metal frame on the rear. The panel also sports horizontally-aligned triple rear cameras up top with a 48-megapixel f/2.0 primary sensor, an 8-megapixel ultra-wide f/2.2 secondary lens, and a 3D ToF third sensor for depth-of-field. As stated above, the cameras double up as selfie camera – making the Galaxy A90 the first of its kind with as many selfie cameras.

The Galaxy A80 is fueled by a 3,700mAh battery with 25W Super Fast charging support. The handset runs Samsung’s OneUI-based Android 9 Pie out of the box to take care of the software side of things. In terms of connectivity, the phone gets WiFi, 4G LTE, Bluetooth, USB Type C support.