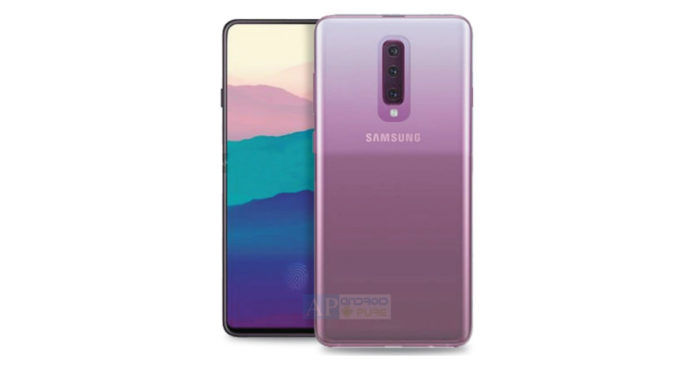 Although we have already seen renders of the upcoming Galaxy A90 mid-ranger from Samsung, it’s always nice to have more renders to confirm the design. The South Korean manufacturer recently confirmed that the Galaxy A90 will feature a notch-less infinity display. This meant that the phone would most probably feature a pop-up selfie camera. Now, case renders for the phone have leaked online and confirmed several of its features.

The Galaxy A90 is going to be the most expensive phone in the A series. Samsung has already launched several A series phones, but the A90 and a few others still remain. It is expected to be announced on April 10th during the scheduled ‘A Galaxy Event’. The case renders confirm that the phone will indeed feature a notch-less display and will come with a pop-up selfie camera.

If you look at the case, you will notice a cutout for the selfie camera at the top. The render shows the centre-mounted, vertical triple rear camera setup and LED flash. We don’t really know a lot about the camera sensors, but a 48-megapixel primary sensor could be included. The phone could also feature a super wide-angle camera. You can also see the imprint of the in-display fingerprint sensor at the front.

The Galaxy A90, as mentioned earlier, will be a mid-range smartphone. Rumours suggest that the phone will be powered by a Snapdragon 700 series chipset available with 6GB of RAM and 64GB internal storage. It is also expected to come with a 3,700 – 4,000mAh battery. The notch-less Infinity display is said to be 6.4-inch in size and feature an FHD+ resolution. That’s all the details we know regarding the hardware on the phone.

Samsung is working hard to get back its place in the mid-range smartphone market in India and other regions. Chinese manufacturers such as Xiaomi, OPPO, and Vivo have taken over this market thanks to their low-cost, yet feature packed offerings. Now, the South Korean giant is doing the same thing by including flagship features on mid-range phones at a competitive price.