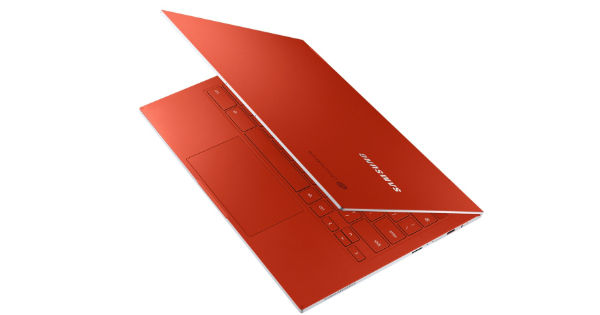 Samsung Galaxy Chromebook price starts at $999 (around Rs 71,800), making it an expensive Chromebook. It comes in Fiesta Red and Mercury Gray colours and will be available in Q1 2020.

Samsung Galaxy Chromebook flaunts a 13.3-inch AMOLED touchscreen display with 3,840 X 2,160 pixels resolution and a thin 3.9mm frame. Samsung mentioned that it would push out an OTA update after the release of the Chromebook that would enable HDR400. It is powered by a 10th-generation Intel Core i5 processor with Intel UHD Graphics, 16GB LPDDR3 RAM and up to 1TB SSD storage. The laptop comes equipped with a 1MP front camera and another 8MP snapper in the base right above the keyboard. It runs on Google’s ChromeOS and has support for Wi-Fi 6.

Samsung Galaxy Chromebook comes with an internal digital dual array microphone and a mono mic. It has a built-in fingerprint sensor for security and 2W stereo speakers. Ports on board include dual USB-C ports, a 3.5mm headphone jack, and a UFS/microSD card reader. The keyboard is backlit, and there is a 49.2Wh battery. It measures 302.6 x 203.2 x 9.9mm and weighs 1.04kg.